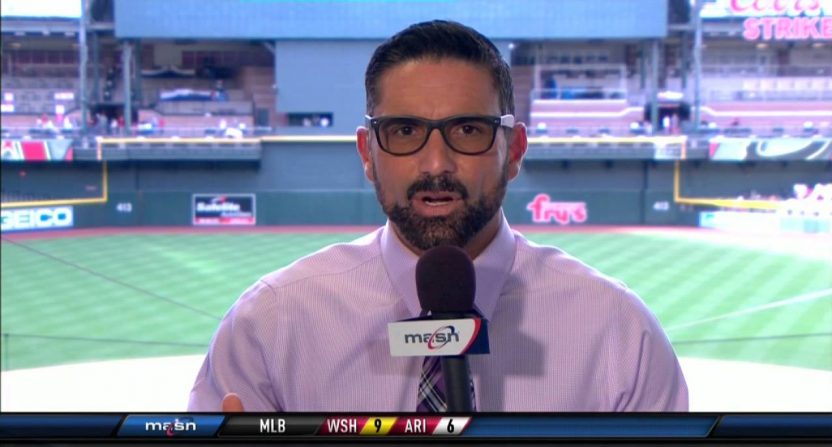 It has now been over a month since F.P. Santangelo called a Washington Nationals game on Mid-Atlantic Sports Network (MASN) broadcasts following a sexual misconduct allegation. Since then, potentially more allegations have surfaced, but there doesn’t seem to be many answers regarding if and when Santangelo will be removed from the booth permanently or if he’ll return.

Chelsea Jane, Ben Strauss, and Jesse Dougherty have been covering the story for the Washington Post and their most recent report reveals some back-and-forth behind-the-scenes maneuvering that almost led to Santangelo’s return a week after the initial allegation before new information came to light. It also digs into the ever-fraught relationship between the Nationals, Baltimore Orioles, and MASN.

Initially, Santangelo’s removal from the booth came from two now-defunct Instagram accounts that separately posted about sexual misconduct allegations against him. Those allegations were submitted to the Nationals, who decided to take action, removing him from their booth while MASN investigated.

The announcer was absent from broadcasts between April 30 and May 2. However, on May 4, Santangelo tweeted “On my way to the ballpark. Can’t wait to see everyone tonight!” That made it all the more cryptic when he did not appear on the broadcast despite the fact that, per WaPo, MASN had completed its investigation and had decided to allow Santangelo to return.

Then, a new Instagram account had posted similar accusations on May 6. The Nationals, who have veto power over anyone they don’t want calling their games, were unsure about whether or not this was a new accuser or the original one. On May 7, they informed MASN that they were revoking Santangelo’s access to the booth. However, according to the Nationals, MASN ignored their request and told Santangelo he could return. That’s when, per WaPo, Nationals staff met the broadcaster in the parking garage and turned him away.

The Athletic posted their story the next day, featuring one of the initial accusers. The 31-year-old woman said Santangelo “made an unwanted advance several years ago, ignored her when she repeatedly told him to stop, and sexually assaulted her.” At that point, all parties involved acknowledged the allegations publicly for the first time. The Nationals released a statement and said they were pushing interest to MASN, who is Santangelo’s employer.

MASN, meanwhile, said it had referred the matter to Major League Baseball.

“MASN followed that policy in this instance, previously apprising MLB of this matter such that the league might adequately review it. Those former Major Leaguers acting as on-air media analysts on the network appear only with the advice and consent of the clubs and MLB.”

And Santangelo denied the accusations in a response to The Athletic.

“What I have read in your recently published article from an anonymous individual about me is untrue and did not happen. This is not representative of who I am as a man or a professional. I am confident that my name and reputation will be fully cleared.”

Meanwhile, as WaPo notes in their report, this is just the latest in a long series of battles between the MLB franchise and their network.

When the franchise moved to Washington, D.C., the Nationals were required to give MASN their TV rights in perpetuity, as payment to the nearby Orioles, who own the network. The awkward relationship has created plenty of problems, especially recently when MASN fired commentators the franchise preferred and slashed budgets for pre- and post-game programming.

The team has also sued MASN for millions of dollars in rights fees that it says have been underpaid. The Nationals have prevailed in court opinions so far but the matter is still being appealed.

Obviously, the sexual assault allegations against Santangelo are the paramount concern here. But in the ongoing war between two entities that should be friendly with one another doesn’t seem like it will be settled anytime soon. And they seem unable to come to agreements even in a situation such as this.