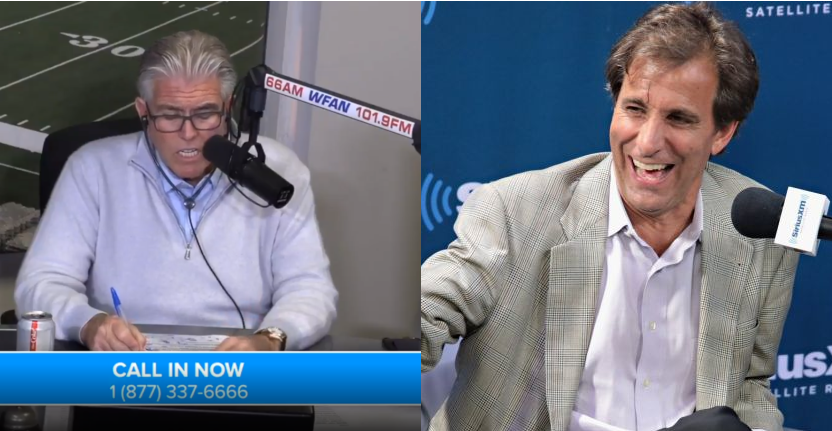 The 2008 split of Mike Francesa and Chris “Mad Dog” Russo (which came in their 19th year together) is acutely felt this week, as the two opinionated sports radio hosts offered incredibly divergent takes on the Houston Astros’ electronically-aided sign-stealing controversy. First, here’s Russo yelling about the severity of all this on his SiriusXM show:

“IT’S ABOUT TIME YOU WAKE UP, BASEBALL! GET MOVING! You read the quote, the money quote in that story with The Athletic? Said a rival executive, ‘Baseball’s done a piss-poor job of managing this stuff the last five years.’ Quote me. Piss-poor. Quote! My god! Stop worrying about all this nonsense, and stop with these investigations! Come down hard on them! EVERY guy who does this from now on, you get an automatic suspension and your team is in trouble, and you’ll lose your draft picks. That garbage will stop in a minute. They love those draft picks; take them away! Take ’em away!”

“And you’ll notice all of a sudden how these teams will say ‘You know what, no more camera guys in center field’! Trying to figure out what pitch is coming on some godforsaken awful crappy game in June, between the Mariners and the Rockies. I mean, really? My god! And I’ll tell you something, if you’re a player, you should be disgraced yourself if you need to know what pitch is coming to be successful in the big leagues. That’s another aspect of this which is disturbing. I wouldn’t want to win that way!”

“Let me tell you STRAIGHT UP; if I get the sign from some guy who got a double, he’s on second base, that’s one thing. If I’ve got to rely on some $22,000 a year guy in the outfield, looking at some asinine center-field camera and some weird contraption and some weird messaging,  so I can find out if it’s a curveball or a fastball…really? I should quit if I’m that bad, if I need that. Find something else to do with my life. MY GOD! I’m done with the Astros, I’m done with all these teams that do this garbage. Ruining the sport! And it’s about time baseball…this has been going on for a long time, and baseball’s done NOTHING! Let me get this straight: Rosenthal found out from Fiers and MLB DID NOT? That’s a JOKE! That’s a JOKE! GET GOING! RIGHT! NOW!”

Meanwhile, Francesa tried to downplay this when a caller asked him about it Tuesday on his WFAN show, and he showed off quite the misunderstanding of the story in the process, claiming that this was about the Astros watching the games on TV (rather than what it really was, which was a center-field camera the team installed that was hooked up to a TV screen in the dugout hallway, something that had nothing to do with the TV broadcast of the game):

Mike Francesa is here to tell you that the sign-stealing controversy involving the Astros is nonsense, even though he didn't bother reading any of the stories about it. Mike also educates us about delays with satellite TV (!!!), and how that would make sign-stealing impossible. pic.twitter.com/IEoKUGjHM5

“You’re still going to have time to signal the batter in the, in the, in the…oh, come on. That’s silly. It’s silly! It’s silly! Come on, come on, Jason! Have you ever talked to baseball players? Jason, most baseball players will tell you they don’t even like people to tell them what’s coming! Ah, stop, stop, I’m so tired of hearing about this, okay? After watching on TV, you know a lot of times, the games are on a delay. Did you ever realize the games are on a delay? Depending on whether the game is on a real line or a satellite line. The game can be on a three-to-five second delay, also. You didn’t bring that part up. Okay?”

“So you have to tell me, do you know sometimes, I can put two different sets on two different places, and one set is two seconds behind the other one. You ever do that, folks? Realize that one is two seconds behind? Because if it goes off the satellite, if it’s transmitted off the satellite, it’s later. So it’s a couple seconds late. So the idea that it’s in real time, you have to tell me whether they transmitted it off the satellite or not. So this idea that everything is, they hit because they stole the signs? Aw, give me a break. And you talk to half the players, ‘Do you like getting signs?’ ‘No, I can’t stand getting signs.'”

It’s notable to see how far Mike and the Mad Dog diverged on this, but where their partnership is really missed is that it would have been much harder for Francesa to blatantly misstate the facts of the case this way if there was someone in-studio to challenge him. Caller Jason in Clifton tried, but Francesa just kept talking over him and presenting an incredibly wrong picture of what was going on. (Francesa really has to lead the world in “minutes spent talking about things he knows nothing about”; another great example along these lines is his infamous 2014 World Cup interview with St. John’s men’s soccer coach Dave Masur, including such insightful questions as “are there guys who kick with both legs?”) As Funhouse noted, it’s hilarious to watch Francesa think he’s beaten the caller when he’s talking about something entirely different:

1:18 to 1:38 is my favorite part. Mike's big "CHECKMATE!" moment. He thinks the Astros are stealing signs by watching the game on satellite TV. ? Amazing to me that not one time during a 3+ hour program did his producer let him know he was making an ass of himself. Unbelievable. https://t.co/2ySWGBuA28

So that’s one more reason to miss Mike and the Mad Dog, the only radio show they’ve made a 30 for 30 on (to date, at least). What if I told you that these two absurd personalties’ over-the-top takes might actually be entertaining if they were bouncing off each other rather than in a vacuum? Sadly, that’s not the world we live in in 2019.