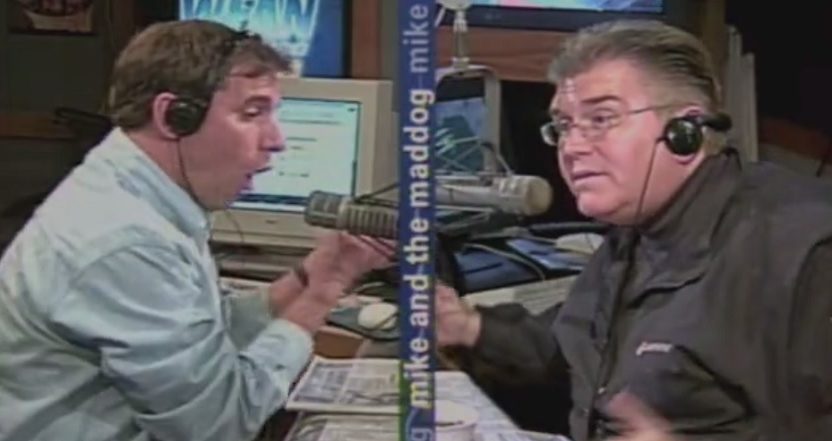 Installment – #91 by ESPN’s count (#92 by mine counting the OJ doc as one installment, although ESPN initially counted it as 5 different 30 for 30s, but now seems to list it separately, not as part of the series. Additionally, one finished project in Down In The Valley has been suspended from airing.)

Most Similar To – Bernie and Ernie, The Legend of Jimmy The Greek

Review-The following actually isn’t much of a review, scroll down further if you want the straight review.

“What if I told you there were two radio blowhards who only mattered to an East Coast bubble? 30 for 30 presents Slappy & the Fart Guy.”

The above tweet is something I’ve said a lot of lately. That more or less, the national interest is probably not there for some of the more recent installments but hey, if the bulk of local viewers tune in and like it, you can put another win on the board for 30 for 30.

The thing that struck me is how much of a hard sell this is at the national level. I had a friend in town and while catching up at dinner he inquired what I was doing later that evening, likely in search of some level of tomfoolery. I told him I was watching this 30 for 30 which he inquired to know more about. The conversation was more or less this:

“I have no idea who or what that is.”

“They are big time sports talk radio hosts in New York. They were cohosts for awhile but then split up and had a bit of a falling out.”

“Um, yeah. I mean, they kind of made sports talk radio what it is today, and have this huge fanatical following, but yeah, that’s it.”

It’s not fair for me to point out this installment alone as being a bit too niche, as many installments fall into that bucket. Now that said, looking back at the majority of those installments, the bulk of them had a much more high-stakes narrative, with a lot of installments focusing on death.  Terry Fox, Eddie Aikau, Tim Richmond, Ben Wilson, and Nick Piantanida at first glance don’t seem like they’d be noteworthy characters for a 30 for 30, but given the unique circumstances of their deaths, I think it was easier for national interest in those installments to build organically. I think for most viewers unaware of Francesa and Mad Dog, my friend’s sentiment of “That’s it?” will be shared by many.

I did enjoy this installment. Both Francesa and Mad Dog are compelling characters, and my interest in sports media coupled with the short one-hour viewing time, made this an enjoyable and breezy installment to watch.

The film relies more heavily on interviews than most, given that the subject matter doesn’t lend itself well to highlight footage like most sports documentaries. That’s where a lot of sports documentaries have petered out; if the subject matter extends so far back that there is not much archival footage. But there are enough colorful interviews and some sprinkled-in footage from when their show was simulcast on television, so it does have some level of flow to it and isn’t just interviews stacked on top of each other for a full hour.

Unlike last year’s Doc & Daryl film, I think the timing was right here for this topic. Both  Francesa and Mad Dog seemed to have the right amount of perspective and time away from each other from their split to candidly and accurately portray the highs and lows of their relationship. That, to me, was crucial and director Daniel H. Forer and ESPN got that right. I think that’s the biggest takeaway here.

What I do worry about is if there is enough new content here for the intended audience. A few years back Grantland did an Oral History on WFAN that had some level of overlap with this film. Given how fanatical fans of Francesa and Mad Dog are, I’m wondering if the reaction might be “It was good, but I didn’t learn anything new.”

Ultimately, this is a pretty low-stakes passion project for ESPN. It’s one hour on a night where no major league or conference has a game on, and there is no real lead-in for this time slot. ESPN can make these type of bets, but it’s rare you see them under the 30 for 30 banner and not some of the other documentary brands they have, which is a whole other conversation. Bottom line, the tweet at the beginning of this article is what it boils down to. But I certainly appreciate you reading 700 words of mine.

Mike and the Mad Dog premieres Thursday, July 13 at 8 p.m. Eastern on ESPN.