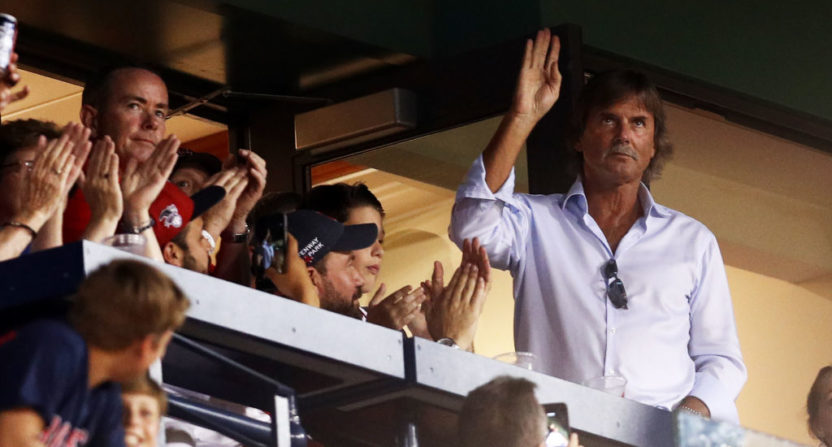 The neverending saga between Hall of Fame pitcher Dennis Eckersley and Red Sox hurler David Price has a new chapter. Eckersley told the Boston Globe’s Dan Shaughnessy that he no intention of meeting with Price and won’t change his broadcasting style. Eckersley purposely stays out of the clubhouse before games feeling he would get too friendly with the players thus compromising his analysis.

On Tuesday, Eckersley was at the Red Sox-Cleveland game not for NESN, but to fulfill a commitment to the team by meeting with fans at Fenway Park’s Legends Suite. He said he was moving on and didn’t intend to change his analysis:

“I’m cool with everything,’’ Eckersley told the Globe before Tuesday night’s game. “I’ve moved on. I’m just going to keep doing what I do, which is call it like I see it. It’s all about the Red Sox and the ultimate goal of winning it all.’’

Price blindsided Eckersley on a team charter in June yelling at him, feeling he was too critical on a NESN broadcast. When Eckersley tried to respond, Price hurled the “F” bomb at him while teammates applauded.

Since then, Price gave a tone-deaf response saying that he “could have handled” the situation differently, however, he doubled down saying he wouldn’t apologize, but if Eckersely came to the clubhouse, “We’ll definitely talk it out.”

But there’s not going to be any talking unless Price goes to the broadcast booth. After being informed what Price said, Eckersley felt he didn’t need to see him. And he’s not going out of his way to meet with the players:

He’s received no apologies from Price, Sox manager John Farrell, or any of the players who applauded when he was verbally ambushed by Price on the team charter back on June 29. And since Price is evidently still proud of his outburst, Eckersley has decided to reject the ball club’s efforts to broker a meeting between the two.

Fenway fans have registered their votes on the matter. They love Eckersley. They do not love Price or his actions.

Team officials from owner John Henry to the front office have all apologized, but nothing from the players. Eckersley is slated to return to NESN on Thursday to call the Red Sox-White Sox game.

Eckersley was shown on Fenway’s big screen Tuesday and received a strong ovation from the fans. He responded by waving and saying “Thank you very much.”

It goes to show that Eckersley remains popular with the fans long after his playing days and they appreciate his candor in the booth. As for Price, he may be popular in the clubhouse, but not with the fans.