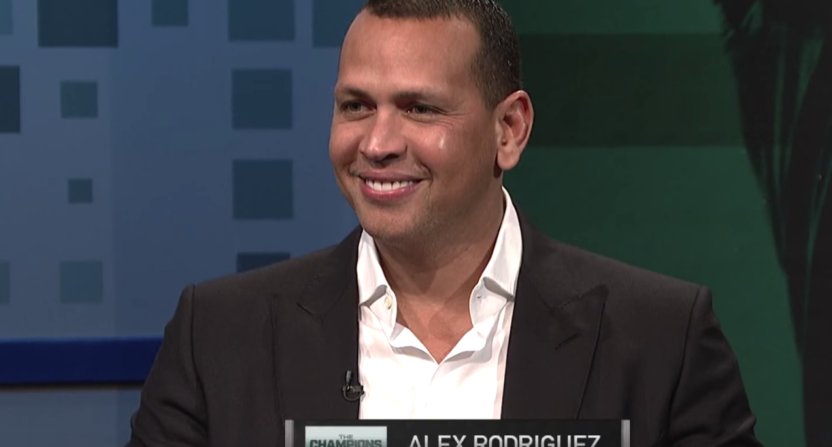 When Alex Rodriguez is at his best as a TV analyst, he applies his experience and knowledge of baseball to provide insight into what hitters and managers are thinking through the course of a ballgame. He also hasn’t been afraid to criticize bad decisions and poor performances.

Yet most of that strong analysis has come in the TV studio rather than the broadcast booth. On ESPN’s Sunday Night Baseball, Rodriguez has often tried to be more of a personality and it hasn’t always worked. For example, early attempts to emulate Tony Romo’s success with predicting plays felt contrived. Perhaps he’ll be more comfortable with play-by-play man Matt Vasgersian in their third season together with an opportunity to show better chemistry in a two-man booth now that Jessica Mendoza has been reassigned.

On Tuesday, Rodriguez made his season debut for ESPN’s Red Sox-Yankees spring training telecast and soon addressed what’s currently the hottest topic in baseball: the Houston Astros’ sign-stealing scandal and the reaction to it among MLB players and fans. Rodriguez’s own tarnished history as a major league ballplayer could make his perspective on the situation interesting. What does someone known for cheating, who had to serve a significant suspension because of it, think of this scandal and how the Astros have handled themselves afterward?

"I served the longest suspension in MLB history. It cost me well over $35M. And you know what? I deserved that."@AROD says the Astros deserve whatever comes their way after the lack of remorse they've shown. pic.twitter.com/AnezyIyhHa

“From a guy who has made as many mistakes as anybody on the biggest stage,” Rodriguez said, “I served the longest suspension in Major League Baseball history and it cost me well over 35 million dollars. And you know what? I deserved that.

“As a result, I came back and I owned it after acting like a buffoon for a long time. I had my apologies and then I went dark. I wanted my next move to be contrite, but I also wanted to go out and play good baseball, and change my narrative.”

OK, a little bit of A-Rod’s overly PR-conscious view still leaked out there in talking about what he wanted people to see. But he was honest about realizing where his next steps needed to go.

Rodriguez was suspended for the entire 2014 MLB season for violating baseball’s PED policy and his involvement in the Biogenesis scandal, in which players were provided PEDs (notably human growth hormone) from a Miami “rejuvenation” clinic. (Rodriguez’s original suspension was for 211 games.) Initially, he denied the allegations and threatened to appeal MLB’s ruling in federal court. This followed years of denying his use of steroids, notably in on-camera interviews with 60 Minutes in 2007 and ESPN in 2009.

Upon his return to MLB in 2015, Rodriguez released a hand-written apology to fans saying he took “full responsibility for the mistakes” that resulted in his suspension. He compiled a .842 OPS with 22 doubles and 33 home runs in an impressive comeback season. But the damage to perception of him as a player and his legacy were done.

Rodriguez will forever be viewed as a cheater, one who took PEDs to boost what were already phenomenal skills to drive up his numbers and make as much money as possible. Furthermore, he lied about it for many years. That will almost certainly cost him induction into the Baseball Hall of Fame, which seemed like a certainty during his playing days.

Yet showing remorse and taking accountability for his actions has somewhat redeemed Rodriguez’s reputation — at least to the point where he became a viable hire for Fox Sports and ESPN as a broadcaster. Providing analysis in the studio and commentary in the announcing booth carries legitimacy with it. Rodriguez hasn’t been blackballed from the sport, restricted to sharing his thoughts on podcasts unaffiliated with MLB,  personal videos on YouTube, or TMZ interviews on the street. As he said, he changed the narrative.

"I thought the reaction was fascinating" pic.twitter.com/uAul58WRI1

Besides insight, what fans and media want from an analyst is candor. Be honest about what’s happening on the field. If a bad play was made, don’t be afraid to say so. Address what the viewer is thinking as he or she watches. And many fans were surely wondering what one of baseball’s most infamous cheaters thought about the sport’s latest major cheating scandal. It was natural for him to share his thoughts on the matter, especially considering his history of disgraced achievements.

Fortunately, Rodriguez didn’t disappoint. His remarks are getting more exposure through social media and articles written than they likely would have from an ESPN telecast which many didn’t see because they were at work. But Rodriguez will have plenty more opportunities to comment on the Astros’ scandal (and penalties for the Boston Red Sox, expected to be announced before the regular season begins).

Sunday Night Baseball makes its debut on March 29 and the Astros’ sign-stealing, their poor handling of its aftermath, and anger from fans and players will likely be addressed. If not then, it will certainly be a topic when the Astros play on SNB, debuting on May 17 against the New York Yankees (whose postseason success was likely affected by Houston’s sign-stealing) and then the following week versus the Red Sox.

Here’s hoping this is the start of a strong season in the booth for Rodriguez, one where he continues to weigh in on what fans want to hear while providing honest commentary regarding what happens on and off the field.