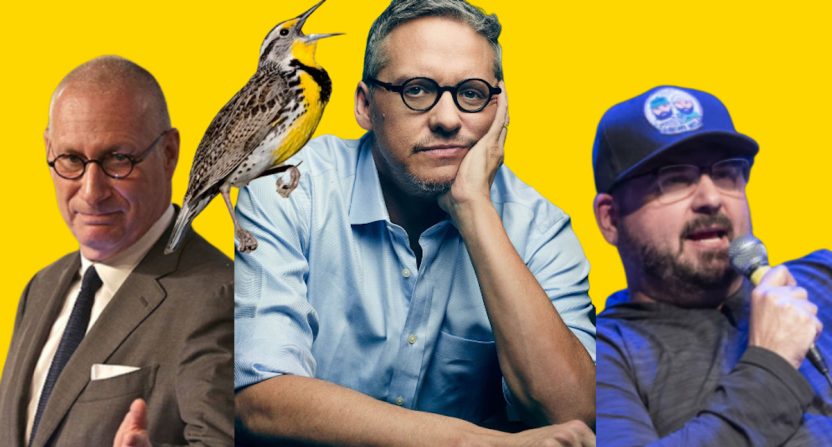 Adam McKay appears to be one of the busiest producers in Hollywood these days, with documentaries including Q: Into the Storm and 537 Votes, series such as Dead to Me and Succession, and movies like Don’t Look Up and Bad Blood. And he’ll apparently be adding to his creative workload with Meadowlark Media, the new content venture from John Skipper and Dan Le Batard.

McKay was a guest on Le Batard’s “South Beach Sessions” this week and Le Batard revealed that the prolific producer, writer, and director will be a part of Meadowlark’s roster on an upcoming project, in addition to several others. McKay is a fan of The Dan Le Batard Show with Stugotz and reached out to Le Batard for support when he was having difficulties with ESPN.

Eventually, that led to raising the possibility of working together somehow. That became more likely when Le Batard left ESPN and formed Meadowlark with Skipper. Le Batard stressed that details couldn’t yet be revealed about what McKay will be doing for Meadowlark.

“I’m excited to work with you on projects,” McKay said. “Like I can’t wait, now that you’re kind of free and clear. Like you and I were kicking around an idea that I definitely think we should do. A series, maybe it’ll be a podcast…”

Le Batard then stopped McKay, saying they’ll announce what they’re doing in the future before joking that they’ll collaborate on “Step Brothers 2” with Le Batard taking over the Will Ferrell role.

But during the interview, the two talked quite a bit about documentary and narrative podcasts that McKay’s production company, Hyperobject Industries, is working on. Among those podcasts are the basketball-themed series, Death at the Wing, which will chronicle the many players who died during the 1980s and 1990s as the NBA was reaching peak popularity.

I’ve been working on this podcast for almost 2 years. In bullshitty Hollywood lingo it’s a “passion project.” But it really is. Guests include Jerry West, @JaneMayerNYer (the Jerry West of journalists), Dr. Todd Boyd (the Anthony Mason of PHDs) and a ton of others. https://t.co/bhATtUihFk

That might be a hint as to what he’ll be doing with Le Batard, which sounds like a more active role than the “creative advisor” positions Meadowlark recently announced for Jemele Hill and Michael Schur.

Le Batard also tried to press McKay for more details on the series about the “Showtime” Los Angeles Lakers of the 1980s he’s producing for HBO.

“We made a decision early on that we were just going to treat it really seriously,” said McKay. “It doesn’t mean we don’t joke around when we’re doing it, but we’re shooting it on film and decided to cast it with A-plus people like John C. Reilly, who in my opinion is one of the best actors around.

“Even the new people we got are really talented. Like the guy who plays Magic Johnson, Quincy Isaiah, is so frickin’ talented, basically an unknown that we discovered in […] close to an open call. This kid is so charismatic and talented.”

McKay called it “a dream project,” explaining that the sports landscape allows storytellers to explore issues of race, income inequality, and addiction that were part of the culture in the 1980s.

A creative partnership between McKay and Le Batard may have been spawned from a friendship and mutual admiration. But the producer’s involvement with potential projects makes it clearer as to what kind of material Meadowlark Media wants to create, rather than just straight sports content.

Regardless, the entire conversation is worth listening to. McKay is a fascinating guy who has seemingly endless curiosity on a variety of subjects and a tireless amount of TV shows, feature films, documentaries, and podcasts with which he’s involved.