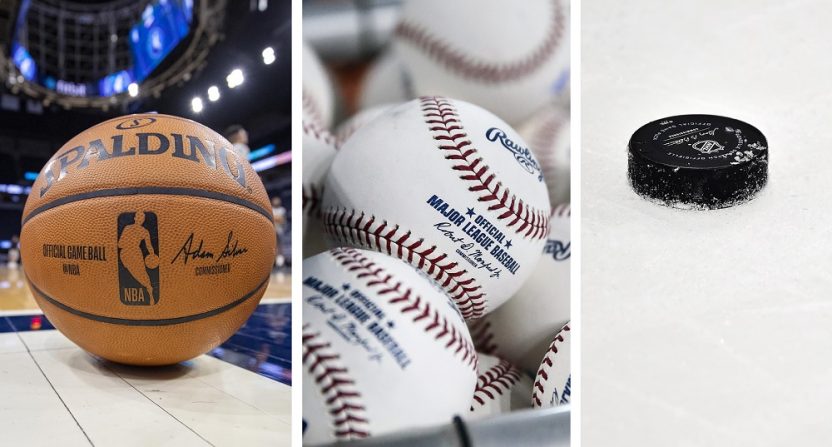 As we’ve thrown together the local announcer rankings for MLB, NBA, and NHL over the last year, I’ve started wondering about something completely meaningless – which local market has the highest-rated local TV announcers across those three leagues?

So with a lack of live sports on the schedule, I decided to investigate. I took our local MLB, NBA, and NHL announcer rankings and averaged the ranking from every market with teams in at least two of those three leagues in order to determine which market had the best overall ranking.

I used the ranking instead of the rating because it was more consistent across the three leagues. For instance, when looking at the NBA rankings, the top four teams had higher ratings than any MLB or NHL team. Does that really mean those four teams are really the best across all three of those sports? Of course not. So why should those teams get an extra boost because of that, especially considering that two of those top four were in the same market, and the other two were in one team markets?

22 markets qualified with more than one team in each of those three leagues. 27 markets did not qualify with just one, and are also listed with minimal detail.

In terms of grouping, here are a few qualifiers, largely related to overall Nielsen markets rather than distance. Here are the lone exceptions.

Anyway, here’s a quick and dirty ranking of the one-team markets (again, one team from these three leagues, not the NFL, MLS, etc). Click here for the full table.

As a friendly reminder, this isn’t some sort of definitive, opinionated list. It’s a fun ranking based on previous votes from our readers. If you agree or disagree, fine. I don’t love or hate your city.

And now, the main event – here are your best and worst markets for local sports TV announcers. Click here for the full table.

Breakdown: If a market has two teams, and both broadcast teams are great (but not elite), does that really make it the best market in the country? Maybe it’s a bit aggressive. Milwaukee is almost being rewarded for not having an NHL team, because if it did and was ranked in the bottom half of the league, this wouldn’t even be a top three ranked market. But in Milwaukee, you can turn on a local professional sports game and know you’re getting a great broadcast. That isn’t true for every market in the country.

Breakdown: Six teams in New York, and the lowest ranking is 17th? That’s impressive. If the Devils were included in New York’s rankings, the market would fall into third, but that isn’t much of a slide at all. New York’s teams have varying degrees of success and have wildly divergent management styles, but they all have competent (at the bare minimum) TV broadcasters.

Breakdown: Well, we can clearly see why Dallas isn’t ranked higher than it is.

Breakdown: Three top ten teams….and a bottom five team. This ranking has to be a disappointment for the Bay Area, given how strong the Giants, A’s, and Sharks broadcast teams are.

Breakdown: The Lakers are the team that drags LA down outside of the top five, but the strong showings by Los Angeles’ other three teams give it an impressive foundation.

Breakdown: I’ll tip my hat to NBC Sports Philadelphia for putting together three broadcast booths that are, at the very least, passable. That’s an impressive job for one RSN.

Breakdown: As a market, Chicago is poised to rise in the future, with former ESPNer Adam Amin taking over as the play by play voice of the Bulls. If he’s even able to make them a mid-ranked team, Chicago could end up as a top five ranked market.

Breakdown: Talk about a tale of two teams. All the credit to St. Louis fans for seemingly being unbiased in their assessment of their local broadcasters.

Breakdown: You cannot get much more average than Tampa Bay. That really isn’t a bad thing.

Breakdown: This is about the ceiling for a market when it has one great broadcast team and one poor one. Fun fact: if you added the Anaheim teams to the Los Angeles grade, LA would have fallen behind both Philadelphia and Chicago in these rankings.

Breakdown: Minneapolis/St. Paul is a market that can break into the top ten if just one of its teams is rated higher by fans.

Breakdown: I think there could be some room for improvement with the Tigers, given that 2019 was Matt Shepard’s first year full-time in the booth for the team. We’re also in a rare period where all three Detroit teams are simply not good at the same time.

Breakdown: If the Marlins and Panthers were more competitive on a regular basis (they’ve combined to make the playoffs twice, both by the Panthers, in the last 15 years), would their broadcasts be better and more entertaining? If so, maybe Miami could be a top ten most highly rated market.

Breakdown: Broadcast booths in the nation’s capital are the very definition of the good, the bad, and the ugly. Perhaps there could be some optimism with the Wizards crew, given that Justin Kutcher just finished his first year with the team.

Breakdown: Yikes. Three teams in the early 20s is not a good recipe for success in a market. Also, this is the lowest ranking for a market with three teams on one RSN. Fox Sports Arizona isn’t covering itself with glory here.

Breakdown: A tale of two teams in one market – one is the lowest-ranked in its sport, and other is solidly middle of the pack. If Houston had an NHL team with a mid-level ranking, that could further help outweigh the Rockets.

Breakdown: Saying there is room for improvement in Denver is an understatement.

Breakdown: When one team is thoroughly mediocre and one is actively bad, the market’s overall ranking will not be good.

Breakdown: It’s never a good sign when a team just outside the bottom third is the highest-rated one in the market.

Breakdown: If Pittsburgh had an NBA team, there’s a chance they wouldn’t rank last. But when a market’s MLB and NHL teams both rank as the second-worst in their respective league, it’s tough to argue that it’s a rough market for viewers.

Here’s a ranking of the two-team markets.

And a ranking of the three-team markets.

And just for the hell of it, a ranking of the four-plus-team markets.