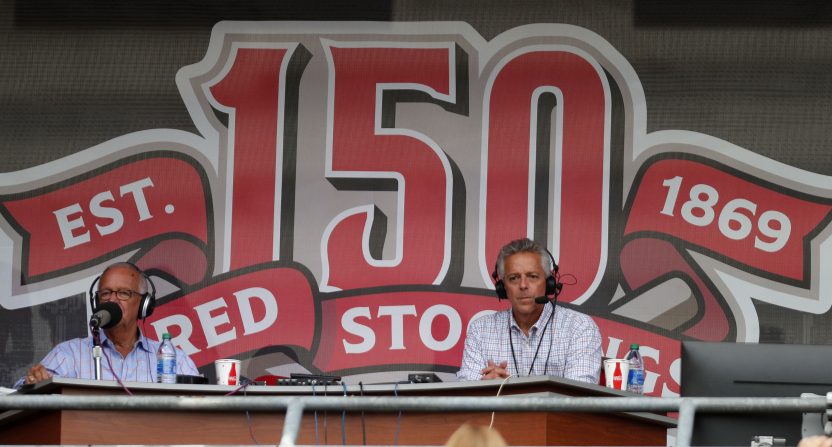 Update: Thom Brennaman resigned today.  Below our article from the end of August about his career and legacy in Cincinnati.

On a beautiful sunny afternoon on September 26th, 2019, Marty Brennaman called his final game for the Cincinnati Reds, ending 46 seasons behind the mic. Ending a season-long farewell tour, the Hall of Famer was surrounded by friends, family, colleagues, and thousands of fans at Great American Ballpark. The iconic Reds radio legend ended his career on a high note and went out on his own terms.

On August 19th, 2020, Thom Brennaman announced that he was stepping away from the Reds after using a homophobic slur on a hot mic eariler in the day. The next morning, the Reds and Fox Sports Ohio announced that Thom was suspended indefinitely. His future with both the city and sports as a whole remains up in the air.

The Brennaman name is arguably one of the most revered names in the city of Cincinnati, let alone the Reds organization. Marty Brennaman was the soundtrack for generations of Reds fans. Over his career, the elder Brennaman called the franchise’s last three World Championship seasons (1975, 1976, 1990), Hank Aaron’s record-tying 714th home run (in his first game with the franchise, no less), Pete Rose’s record-breaking 4,192th hit, and in a non-baseball highlight, Christian Laettner’s buzzer beater against Kentucky in the 1992 NCAA Tournament. He has been a force in the world of broadcasting, and not just in Cincinnati.

For better or worse, Thom Brennaman has always lived in his father’s shadow on a local level. In that Cincinnati-centric shadow, Thom followed in his father’s footsteps and started calling Reds games since 2006 for Fox Sports Ohio. While he has always been the son of Marty in Cincinnati, Thom’s resume has far surpassed Marty’s success on the national level. That resume includes the 2003 NLCS (during which Steve Bartman became nationally known in Game 6), Appalachian State’s historic upset of Michigan on the first game ever broadcast on the Big Ten Network, and Boise State’s wild Fiesta Bowl victory over Oklahoma. He also called all three of Fox’s BCS Championship Games, and has been a fixture on NFL on Fox game broadcasts (until last week).

It wasn’t hard to see Thom having a sendoff similar to his father’s from the Reds some day in the future, following decades more of national and local prominence. His future with the Reds seemed secure and his relationship with Fox appeared to be on equally sound footing. But that may all be gone now, as a moment of undeniable ignorance and hatred is threatening to undo his decades of work. While national voices and non-Reds fans were stunned by his comment, Cincinnati fans saw Brennaman’s commentary devolving over the season.

During the 2020 season alone, Brennaman has attracted negative attention multiple times for on-air comments. To name a pair of examples, he delighted in setting up broadcast partner Jim Day to mock Eugenio Suarez’s accent and talked about the very much alive Jack Clark being dead. Brennaman consistently seemed to enjoy going right up to the line with a provocative comment or topic, tap his toe over that line, and then move on like nobody noticed or cared. However, he was wrong: we did notice, and we did care.

Given Brennaman’s history of buzzing by broadcasting no fly zones, what does he say when he’s off the air or during commercial breaks? Knowledgeable Reds fans know that Marty Brennaman had an infamously dirty mouth off the air, to the point that Marty and his colleagues often joked about Marty’s love for profanity. When he was calling games with Joe Nuxhall, Nuxhall would often warn Marty about his mouth and say something like, “one of these days, you’re going to get caught and that’s going to be it.” However, Marty never muddied the waters with any hateful comments or slurs, a line his son crossed a week ago.

Brennaman’s first apology also was a disappointment. By apologizing to his employer before the LGBTQ+ community, Brennaman seemingly showed that he’s more worried about himself than the hurt he caused. By not presenting the apology until five innings into the second game of that night’s doubleheader, Brennaman’s prewritten words passed off as a sincere, from the heart apology made him look even more shallow. His written apology the next day came off even less sincerely, as he feigned ignorance of the slur he used and said, “I had no idea it was so rooted in hate and violence,” which is a claim so unbelievable that it’s almost as infuriating as the original comment itself.

Nearly a week later, we still don’t have an explanation of the context of Thom’s hateful comment (not that any context would excuse it). The unspoken truth here is that any acknowledgement of that context could pull the curtain back on what Thom Brennaman says when people aren’t listening, which could open a can of worms that might incinerate whatever was left of his career. Cubs social media host Michael Bolling seemed to hint that Brennaman’s wayward comment was not out of character in a now-deleted tweet.

The Reds and Fox Sports Ohio have to decide whether they want to let go of a man who deeply hurt and offended thousands of people, or if they want to protect their premier broadcaster because his last name is Brennaman. Over the course of history, an inordinate amount of people have been shielded from consequences because of their resume, their position, or even their last name. We couldn’t have expected the Brennaman legacy in Cincinnati to end this quickly after Marty’s retirement in such an ugly way, but will this actually be the end? Whether or not it is, the Brennaman name has been stained forever in Cincinnati, and it’s going to take quite a bit of work to even partially undo the damage Thom did a week ago.