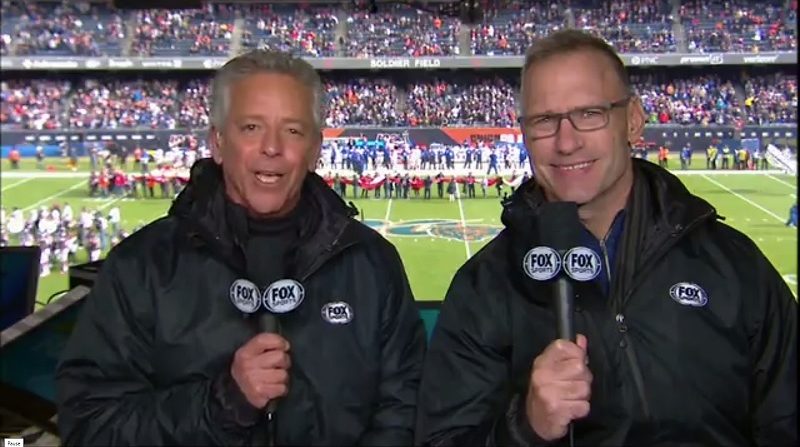 Thom Brennaman’s use of a homophobic slur during Game 1 of Wednesday night’s Reds-Royals doubleheader has resulted in him losing his gig at the NFL on Fox.

On Thursday, Fox announced that Brennaman (seen above on the left with broadcast partner Chris Spielman) wouldn’t be a part of their 2020 NFL schedule, calling his language “abhorrent, unacceptable, and not representative of the values of FOX Sports.”

FOX Sports is extremely disappointed with Thom Brennaman’s remarks during Wednesday’s Cincinnati Reds telecast. The language used was abhorrent, unacceptable, and not representative of the values of FOX Sports. As it relates to Brennaman’s FOX NFL role, we are moving forward with our NFL schedule which will not include him.

Brennaman had been a full-time part of the NFL on Fox since 2009, though he started calling NFL games for the network back in 1994. He was also Fox’s voice of the BCS when the network had the rights to that package, and was a long-time part of the MLB on Fox national broadcasts. He’s worked with various partners over the years at the network, including Charles Davis on both college football and the NFL, Troy Aikman (during the MLB Postseason), Brian Billick, David Diehl, and most recently, Chris Spielman.

The 2020 NFL on Fox lineup of broadcast crews has yet to be announced, but was beginning to take shape following several months of departures and new hires. Without Brennaman and Spielman in the lineup, here’s what Fox’s NFL teams could look like this year.

Either Chris Myers or Dick Stockton could work with Spielman, now that Brennaman is out of the picture, and someone like Greg Jennings could be paired with the other. That certainly seems like it would be the easiest course of action for Fox, and would certainly get the job done without further shaking up their lineup.