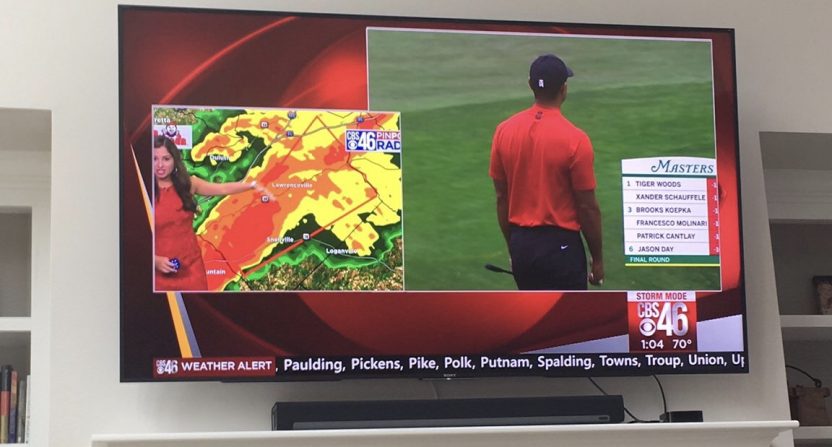 Springtime can lead to some volatile weather across the country, especially in the South. It can lead to breaking news coverage featuring cut-ins during network programming. It happened this past weekend in Mississippi, where one meteorologist got our attention by snapping his fingers at someone off-camera. It happened again during The Masters on Sunday, and in this case, it led to viewer anger and in some extreme cases, death threats.

Atlanta meteorologist Ella Dorsey (who made it into one of our editions of This Week in Hot Takes) received the ire of viewers when she broke into live coverage of the final round of the Masters on Sunday. She cut into the CBS network for a tornado warning with a double box so viewers could watch Tiger Woods on his historic run to win his fifth green jacket, but it still didn’t satisfy people:

@CBS46 is literally making one of the greatest finishes of the Masters ever be absolutely miserable. Just give us the scroll. We understand it is “moving very fast.” We know where to take cover in our homes. #PlsStopStormMode pic.twitter.com/Kvnodve6uh

I’m about to walk down to CBS46 and pull the plug on their weather machine.

I live a block away from @cbs46. I’m driving there now to murder somebody.

The cut-ins led some people to issue death threats to Dorsey, and she responded on Twitter.

To everyone sending me death threats right now: you wouldn’t be saying a damn thing if a tornado was ravaging your home this afternoon. Lives are more important than 5 minutes of golf. I will continue to repeat that if and when we cut into programming to keep people safe.

It’s a fine line that stations have to walk, determining whether an alert is so important they need to break into programming or run a crawl on the bottom of the screen. WGCL thought it was necessary to break into the Masters and risk incurring the wrath of viewers. But sending Dorsey death threats is not right. She’s providing a public service and yes, sometimes the timing of the cut-ins are bad, but you’d rather go with safety here.

In Washington, D.C., CBS affiliate WUSA also broke into programming, but it was during the taped replay of the Masters. High winds and rains left residents without power and there was a tornado warning in a D.C. suburb.

Meteorologist Topper Shutt explained why he broke into the Masters:

“I will say this, had the Masters been live, we would have likely addressed it with a crawl across the screen. But it wasn’t live and happening in our viewing area, we went live and the policy is to stay live until the warning expires or is cancelled and it was canceled two minutes after it expired.”

You may notice that Shutt tagged Michael Wilbon in his tweet. Why did he do that? Apparently Wilbon was watching the Masters on tape delay and wasn’t happy over the cut-in.

Channel 9 in DC, the CBS affiliate: you people couldn't wait until Tiger putted out (on replay granted) before you took HIM off the screen for your self-indulgent endless weather interruption? Really?!?!? A pox on your producers, probably some of my dear friends!

Self-indulgence is wanting a replay over other people needing potentially life-saving information. This is painfully short-sided & feeds an unnecessary & uneducated pushback against local meteorologists/journalists who are doing important work. You should know better, Wilbon.

It's sad we have to apologize for him

Broadcasting the replay of a golf match vs informing the public about a potentially life-threatening situation. I think they made the right call. #priorities

Good night to everyone! (Except for Michael Wilbon and his army of people hating on meteorologists because they are doing this for our safety!)

Viewers were not happy over weather coverage, but if a tornado hit without any live warnings, there would be outrage the other way. Yes, we have phones with emergency alerts, but how many people have actually turned those alerts off? So for local stations, this is still the best way to reach their audiences to provide a public service.