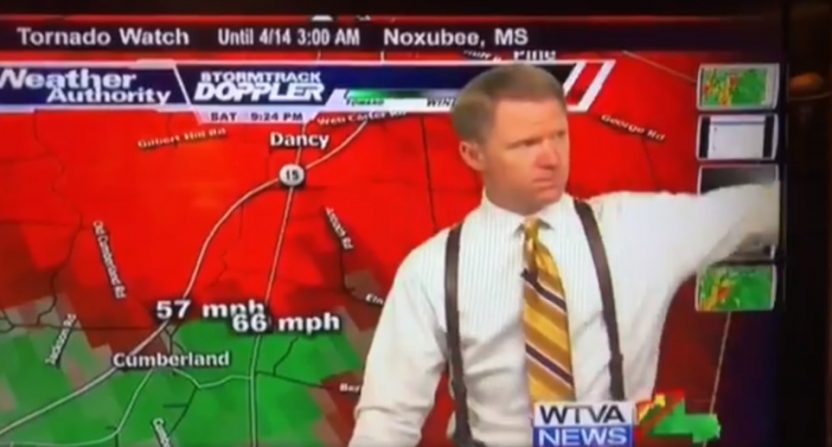 Tensions sometimes run high in local news, especially during an intense situation. But it’s rare to see that show up on-air. That’s what happened during a storm report on WTVA (a dual NBC and ABC affiliate in Tupelo, Mississippi) Saturday night, though, with chief meteorologist Matt Laubhan repeatedly snapping his fingers at someone off-camera named John (presumably fellow meteorologist John Dolusic) during a tornado watch report:

(Can we talk about the “my cat died last week” on the closed captioning?)

Oh, and there was more still:

Apparently, though, the anger in that latter clip wasn’t at Dolusic, but at the Doppler radar system:

He wasn’t mad at John there (thankfully for John’s sake haha). Doppler radar went down.

In any rate, this all spawned some Twitter commentary:

When yaboi made a Whataburger run in the middle of a tornado warning and ain’t even bring you anything pic.twitter.com/6BurS5XMPD

Imagine getting clapped at on tv by a man wearing suspenders

I don't know how John feels about this, but if it was me, I'd be opening up a 55-gallon can on Matt as soon as the weather clears… https://t.co/WXLODT2qhh

And apparently, Laubhan’s done some of this in the past:

I’ve seen him do this to John before. Sometime last year he came running into the station during bad weather and quite literally kicked John off camera and was like “I’ll take it from here”…John got put in the corner that day lol

Did some research. This clap is nothing compared to “basement now”! https://t.co/ZfyK8fo12r

Meanwhile, others were mad that ABC’s coverage of Warriors-Clippers kept getting cut into for this:

Tornadoes are obviously a dangerous situation, and some tension while covering them is understandable. But it’s still a bit unusual to see that show up on-air this way.