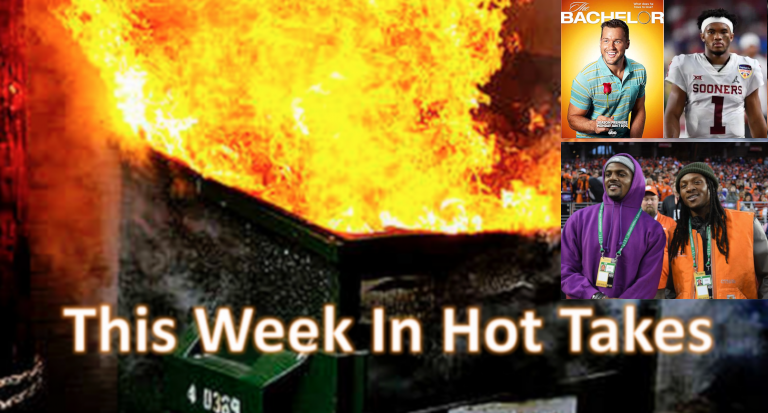 Welcome to another edition of This Week In Hot Takes. This time around, we’re looking at takes from Jan. 4-10.

LADIES: If you spent Monday night watching the Bachelor instead of the National Championship game and you’re wondering why you haven’t gotten asked on that second date…

Well, that probably has a lot to do with it.

After a lot of criticism, Dorsey later tried to back off 12 hours later by saying she was joking:

But that’s still a bad take, and one that really doesn’t cover the reality of relationships. First, there are lots of women who love college football in its own right, not as a way to impress a potential romantic partner. Beyond that,, there are plenty of men and women out there who aren’t college football fans and are fans of The Bachelor, so the reverse of Dorsey’s argument might be true for some. And there are also plenty of people who can accept that whoever they’re dating has some different interests. Beyond that, faking interest in something to impress a potential romantic partner often ends badly. Oh, and even some college football fans opted to not watch the title game thanks to it being Alabama-Clemson again. So this is wrong on a lot of levels.

4. Mike Klis argues Broncos are right not to let assistant coaches interview for other jobs, four years after criticizing the Bengals for a similar policy: It’s always interesting to see a pundit go back on what they’ve previously stated, and Mike Klis of Denver NBC affiliate 9News appeared to do that this week. Here’s what he said this week about the Broncos’ decision to not let assistant coaches interview elsewhere until the new head coach evaluated the staff:

Smart move by Elway not letting ANY team talk to his asst coaches until new head coach evaluates holdover staff. It's about the Broncos.
Per league sources, Sean Kugler has drawn interest from multiple teams but Denver not letting any team talk to respected OL coach. #9sports

And here’s what Klis wrote in January 2015 while still at the Denver Post, blasting the Bengals for prohibiting interviews of Vance Joseph in a piece titled “Marvin Lewis, Mike Brown, NFL need to do the right thing for Vance Joseph“:

It’s time for Cincinnati Bengals head coach Marvin Lewis to step up and be heard on behalf of his defensive backs coach Vance Joseph.

This isn’t about the Broncos. This is about Joseph, the former University of Colorado backup quarterback, getting the promotion he has earned and deserves.

…This is the wrong stance for a candidate of any color much less a minority. In the week our nation is honoring Martin Luther King and his life’s work for racial equality, the Bengals are denying Joseph, an African American, his right for a career advancement.

Does the NFL, which has proven to be slow to understand the magnitude of social issues, understand the injustice here? Perhaps, the league is simply too preoccupied with that all-important matter of deflated footballs.

Of course, the situations aren’t completely identical. In Klis’ defense, he’s not necessarily arguing for no interviews at all, but no interviews until a new head coach was named (Vic Fangio was named to that role Thursday). And Joseph wound up getting that promotion anyway, serving as the Miami Dolphins’ DC in 2016 before becoming the Broncos’ head coach in 2017 (he held that role for two years and was fired Dec. 31).

It’s also not clear if the interest Klis mentions is for other offensive line positions, or for a promotion. And Kugler is white, so “much less a minority” doesn’t apply. But Klis did say that “This is the wrong stance for a candidate of any color.” And advocating for blocking an assistant coach who might be fired in a week by the new head coach from even taking interviews elsewhere doesn’t feel like a great stance.

3. Jen Rainwater calls Kyler Murray “a stupid, selfish, baby & brat,” says she’ll laugh if he gets hurt in the NFL: On Wednesday, Jen Rainwater (then a front page writer for SB Nation’s Oakland A’s blog Athletics Nation) saw the news that the A’s expect Kyler Murray (who Oakland picked in the first round of the MLB draft last year) to enter the NFL draft following his Heisman-winning season at Oklahoma, and she went off on him on Twitter in since-deleted tweets (she appears to have deleted her whole account now). Here they are: 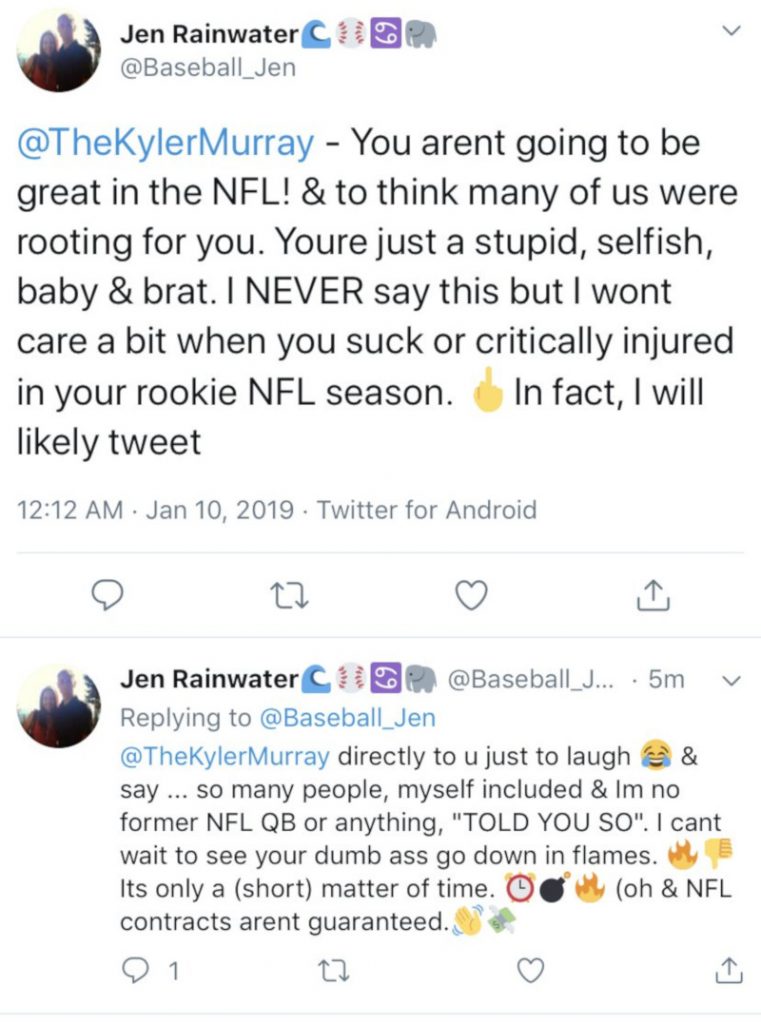 This led to SB Nation parting ways with Rainwater, to other stories of her harassing people popping up, and to her posting a since-deleted Facebook rant accusing people of fabricating tweets from her account over years. But just focusing on the Murray take, “stupid, selfish, baby & brat” is quite the thing for a sportswriter to call an athlete, and saying you’ll laugh when he gets injured is even worse.

I know like I’m going to sound like an old pawpaw but seriously DeShaun Watson is a starting QB in the NFL and he couldn’t dress better? You’re not a corner or a WR. You’re a QB, you’re a brand.

First, it’s silly to try and dictate what athletes wear (especially on the sidelines of a game they’re not even playing in), and that’s before you get to Stillman’s claim that “you’re not a corner or a WR,” which would seem to carry some racial connotations given that the majority of players at those positions at the NFL level are black and that the majority of NFL quarterbacks are white. Also, Stillman can’t Google Watson’s name and realize that it’s spelled without a capital S? But what’s particularly funny to see Stillman argue sans evidence that this is somehow damaging for Watson’s brand. As Watson himself later responded, he isn’t too worried about that:

Lmao! My brand is pretty solid JARED! I think I was very comfortable and chill to cheer on my University! https://t.co/TqXap88pLo

“My brand is pretty solid JARED” is going to become a great go-to response.

1. Patrick Bet-David says there’s “something wrong with this picture” of Watson celebrating Clemson’s win after the Texans’ loss: Amazingly, Stillman didn’t even have the worst Watson take of the week. That goes to PHP Agency (an insurance company) CEO Patrick Bet-David, who’s also the CEO of Valuetainment Media (“The #1 channel for entrepreneurs on YouTube”). Bet-David had an issue not with Watson’s hoodie, but with…him enjoying a win by his alma mater?

He’s on track to be the Dwight Howard of the NFL.

You’re celebrating, 3 days after losing to the Colts as the starting quarterback? The pain of a loss in the playoffs can’t go away that quickly. There’s something wrong with this picture. https://t.co/gcdCRCrdUi

I mean, c’mon, man. Of course that loss probably hurt for Watson, and of course he’s probably still thinking about it, but is he supposed to just go sulk indefinitely, lying in bed and eating ice cream or something? He can’t watch his school win a national title and enjoy that? Trying to regulate other people’s emotions is just silly in general, but this is a particularly bad take on it.

Honorable mentions: Colin Cowherd compares working for Nick Saban to Scientology, Stephen A. Smith says Kliff Kingsbury should be on The Bachelor instead of coaching in the NFL (that’s a fun one to combine with Dorsey’s Bachelor take above).