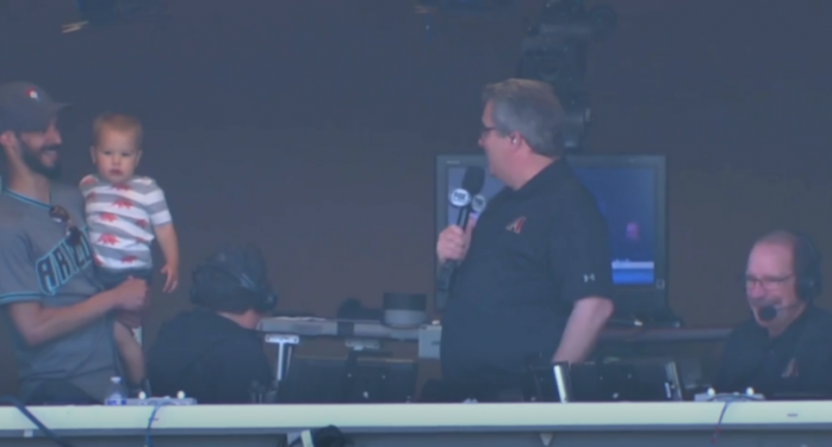 Everyone falls for fake Twitter accounts from time to time, from ESPN to CBS to the BBC and SI. But it’s more unusual to see what happened Thursday as the result of a fake account. Michael Ravare, an Arizona Diamondbacks’ fan who was at Denver’s Coors Field to watch them play the Rockies, tweeted at the @BertDbacks account, an account that he thought was for Fox Sports Arizona play-by-play broadcaster Steve Berthiaume (despite the misspelling of Berthiaume’s name in the account profile) and asked if he could come to the booth to say hi. The account responded “Sure.”, and that led to some on-broadcast awkwardness when Ravare did just that with his sister and nephew, only to be told by Berthiaume himself that he’s not actually on Twitter:

Look, yes, on one hand, “Berthiaummme” in the profile name, the description of “I am not the Fox Sports Arizona Broadcaster for The Arizona Diamondbacks. (No real affiliations to the real Steve Berthiaumme or the Arizona D’backs),” and the last two tweets before this should have provided clues that this wasn’t actually Berthiaume. But on the other hand, it seems pretty odd that someone out there would spend their time impersonating the Diamondbacks’ announcer in the first place, not to mention encouraging a family to go visit the booth and creating a whole lot of awkwardness for everyone. And the account in question took great pains not to actually apologize:

Not my fault you didn’t realize it was a parody account, hell look at my profile picture. I apologize for the inconvenience, i reply sarcastically to everyone who @‘s me thinking im a real account. All love! Hope it was at the very least an interesting experience. https://t.co/kyxK7QMVBo

Trolling gullible media outlets is one thing (even if that’s also pretty dumb), but trolling average fans feels like punching down. Especially considering that they were at a game and probably not doing extensive Twitter research; it’s quite possible to see Ravare getting this idea, searching Twitter for something like “Steve Dbacks” (@BertDBacks is the fourth result there, and the only one with a profile picture of Berthiuame), and going from there without reading the account description or its last tweets.

And sure, Ravare probably should have looked into this a little more, but it seems strange that anyone would lead a fan on this way. And if you really want to parody the Diamondbacks’ broadcaster, maybe put “Fake” in the account name, or at least don’t reply to people like you’re the actual broadcaster? At least @BertDBacks got their ten seconds of fame, though.