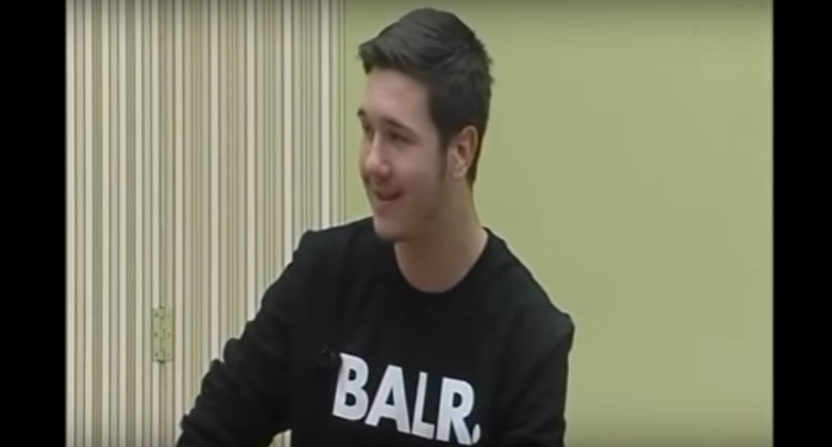 There’s a 20-year-old who’s received a lot of buzz in tennis circles for taking bold stands against the homophobic and transphobic remarks of Margaret Court and the alt-right followers of Tennys Sandgren, praising Serena Williams and Venus Williams at a time when many male tennis players weren’t, criticizing and even seemingly coming back from a life-threatening stroke and coma to earn a spot at several big tournaments. That would be Macedonian player Darko Grncarov, who gained praise from the likes of player-turned-announcer James Blake and famed player Martina Navratilova, earned high-profile interviews and pieces from the BBC and Metro (plus plenty of tennis-focused publications), seemed to attract some major sponsorships, earned a Twitter verification, picked up a massive online following and appeared to have big things ahead. The only problem? His story wasn’t real.

In a remarkable piece at Slate, Ben Rothenberg details Grncarov’s seeming rise to prominence and the many renowned athletes and media outlets who bought into his story, especially when he started speaking out about issues in tennis in a way few others were. Grncarov even added plenty of drama last summer with a post about bouncing back from a coma and stroke: 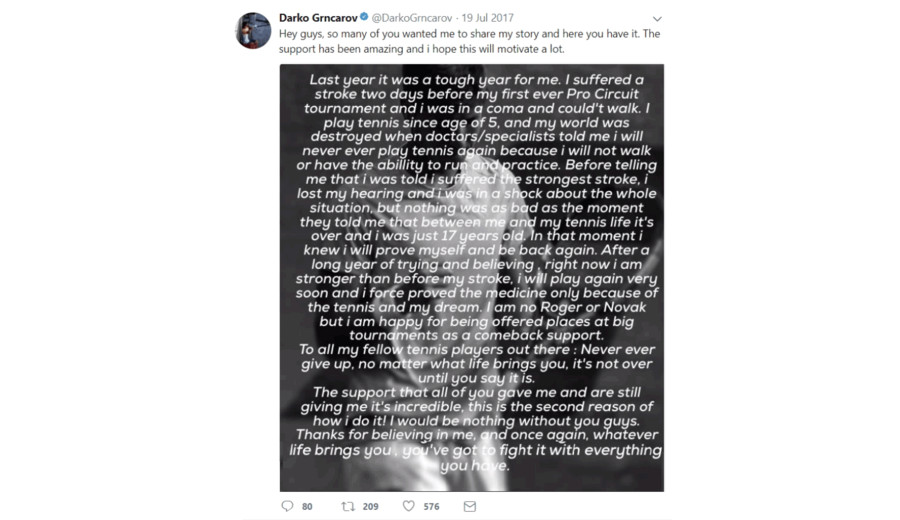 But there’s no evidence of that, and that speaks for much of Grncarov’s story. It doesn’t look like he competed in many of the events he claimed to or against the opponents he claimed, with his only verifiable international results being a junior event in Montenegro in 2015 (where he lost 6-0, 6-0 to Nikola Vukotic) and a withdrawal from a tournament in Egypt in 2017 (where he claimed two wins that didn’t happen). He had plenty of passionate followers on Twitter who would go after any of his critics, though, and they may not even have been bots, as a computational analysis from Oxford’s Lisa-Maria Neudert suggested they were human, but also that there “could be some sort of troll factory behind [the accounts].” And he did manage to earn praise from the likes of Blake and Navratilova, and maybe most notably, big stories and interviews from British media outlets like the BBC and Metro. In November, Metro’s George Bellshaw wrote an incredible “exclusive” on Grncarov, titled “Tennis player who was in a coma for six months is about to make incredible return,” which now appears to be based on false information. Here are some highlights:

Darko Grncarov was just a regular young sportsman set to embark on the long, winding road towards stardom, until he was told by doctors he may never play tennis again. Born in Skopje, Macedonia, he grew up idolising the Williams sisters, Rafael Nadal and Novak Djokovic and hadn’t known life without a tennis racquet in his hand since his uncle first bought him one when he was four.

By the time he was 18, Grncarov had practised with familiar faces on the ATP Tour – hitting with Viktor Troicki, Gilles Simon and Robin Haase – and he was set to make his professional debut at an event in Turkey in December 2016. But with his bags packed and preparations made, disaster struck.

After long practises and training sessions in the gym, a blood vessel burst in his brain and Grncaraov suffered a stroke, which left him in a coma for six months. ‘I had the stroke on the right side on my brain,’ he exclusively told Metro.co.uk. ‘After the day of the stroke, I woke up for like two hours and I just remember screaming because my head was hurting so bad. The next thing I remember is waking up after six months.’

And BBC 5 Live Radio host Dotun Adebayo conducted a remarkable nine-minute interview with Grncarov in January, including this exchange:

Adebayo then shifted the conversation to Grncarov’s own career. “People might remember that you suffered a stroke-induced coma in 2016, but you’re making, I understand, a remarkable comeback,” Adebayo said. “How difficult has the journey been? Are you fully recovered now?”

“I’m definitely ready to play,” Grncarov said. “I was actually supposed to play this month and next month at ATP tournaments, but I recently lost a special person in my life which made me cancel my tournaments for the next two months.”

Like so much with Grncarov, that doesn’t appear true, as Rothenberg notes:

(In a January Twitter post he later deleted, Grncarov said his comeback would be delayed because of the death of his mother. A woman who appears to be Grncarov’s mother, Mirjana Grncarova, has continued to post on Facebook in the weeks after Grncarov announced her death.)

What’s further remarkable is that this could have been stopped at many points along the way. Many of the players Grncarov claimed to have competed against or trained with never encountered him, including Troicki (who’s reached as high as 12th in the world). The videos Grncarov posted to social media sites, and got others to post, were clearly of different players, and some were pilfered from the Instagram account of Spanish junior player Cameron Henricy Trigolos. But beyond that, the tournament results should have been particularly easy to check, and even some local Macedonian media outlets stopped covering Grncarov once they couldn’t verify his claims. And yet, many bigger tennis-specific and general outlets were eager to buy into Grncarov’s story, and gave him a whole lot of publicity. But that all ended recently, with Grncarov taking down his social media accounts once Rothenberg started asking him about the Egypt tournament:

Grncarov’s attitude changed when I asked him about the tournament in Egypt where he withdrew before playing a match, as well as the Metro report that said he’d been in a coma for six months. If the Metro timeline was right, he would’ve still been in that coma when he entered the Egypt tournament. I asked Grncarov if he’d actually been in a coma, or if it was possible it’d happened at a different time.

“Ok it’s a fair question, no biggie but dude you seem so rude,” he said. “That’s why I’m quitting it. When you actually have something good for me let me know, hopefully see you soon.”

When I said I suspected the photos and videos he’d posted on Twitter and Instagram were of other people, he cut me off completely. “You don’t have the right to do this, unprofessional,” he said, ending our conversation by blocking me on Twitter.

A short while later, Grncarov deactivated his Twitter and Instagram accounts as well as his personal Facebook account. I didn’t have a chance to ask about his connection to the many Twitter accounts devoted to him, but soon many of them became locked, too. In just a few minutes, Darko Grncarov, a real person who built himself a fake life on social media, had disappeared from it altogether.

While Grncarov is far from the only fake news story to come out of Macedonia (a remarkable November 2016 BuzzFeed story covered how the country has become a hub for fake U.S. political sites seeking clicks with made-up information), his case has had one of the most substantial impacts on the sports world so far. And it will be interesting to see how the news organizations that seemingly got duped handle this; will they conduct investigations, or issue corrections? At any case, Grncarov’s profile seems to be nowhere close to what he said it was, or what news organizations let him build it up to be. And that’s a great reminder of how important it is to be careful with stories in this day and age. Sometimes, a story that seems too good to be true actually is.