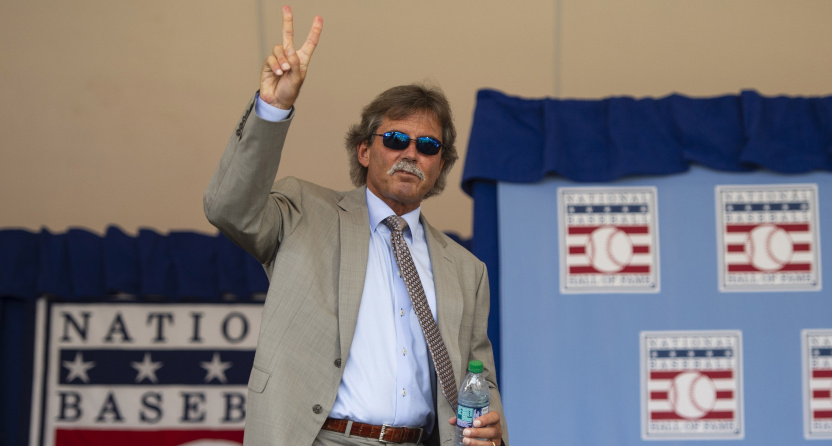 The NESN Boston Red Sox broadcasts will be missing a familiar face next year. Dennis Eckersley, who’s been an analyst on those broadcasts since 2003, is retiring from that booth at the end of the season. The Oct. 5 regular season finale will be his last game in the booth. Here’s more on that from Chad Finn of The Boston Globe:

Dennis Eckersley will retire from NESN booth at season’s end. https://t.co/3vbF7hqrzE via @BostonGlobe

Before joining the NESN booth, Eckersley played for the Red Sox from 1978-84 and again in 1998. That was part of a remarkable career spanning 24 years in the major leagues, and he was elected to the Baseball Hall of Fame in 2004, his first year of eligibility. He’ll turn 68 in October, and he told Finn part of this decision is so he and his wife Jennifer can move to California and spend more time with their twin grandchildren, who will be four years old this fall.

“I’ve been thinking about this for a long time, I really have,” said Eckersley, who turns 68 in October. “Not that it matters, but it’s kind of a round number, leaving. I started in pro ball in ‘72, when I was a 17-year-old kid right out of high school. Fifty years ago. And I’ve been with NESN for 20 years, even though it doesn’t feel like that because I didn’t do much my first four or five years. So it’s time.”

“There are times in your life when you realize you’ve got to get on with it,” he said. “Having grandkids in the Bay Area and visiting them in the offseason, that pushed me along. I just knew, you need to go and be with the kids. Those formative years, you need to be there.”

“There’s only so much time. How can you not see that in front of you without thinking, ‘Wait a minute, man’? There have to be other priorities. You need to think of other people.”

The NESN broadcast booth already underwent substantial change ahead of this season following the October passing of famed analyst Jerry Remy. Eckersley was the primary figure carrying over on the analyst side, and he worked about 75 games this year. But he said to Finn he’d told NESN executives as early as this offseason that retirement was a possibility for him after the year, so this news won’t take them fully by surprise.

Eckersley (seen above in 2019 at that year’s Hall of Fame inductions) will certainly be missed, both for his baseball analysis and his fun conversations around things like “drip” and Studio 54. Eckersley had some back-and-forths with players who didn’t like his criticisms, particularly David Price, but many viewers were quite fond of what he brought to NESN. It will be interesting to see how they replace him.

The new NESN analysts for this year were Tony Massarotti, Kevin Millar and Kevin Youkilis. We’ll see if any of them wind up with more work next year following Eckersley’s exit.