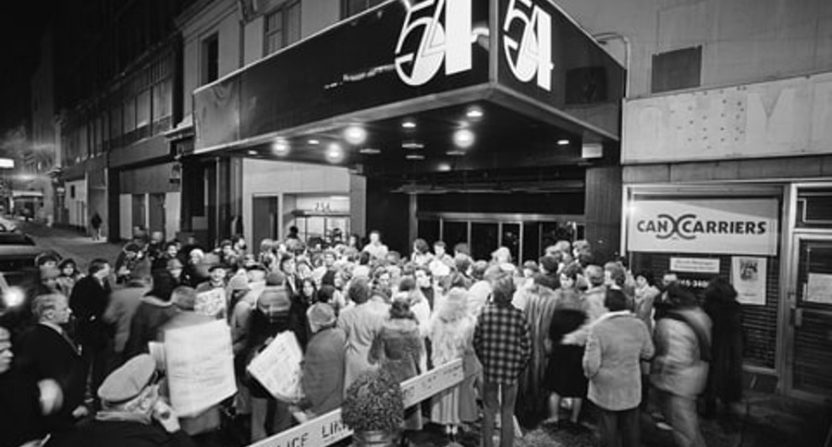 NESN Boston Red Sox analyst Jerry Remy has missed much of this season while battling a lung cancer recurrence, but he returned to the booth this weekend and traded some great stories with fellow analyst Dennis Eckersley throughout Boston’s series against the Tampa Bay Rays. Perhaps the best came Saturday night, where Remy and Eckersley talked about going to famed New York City nightclub Studio 54 during their playing careers with the Red Sox (Remy played for Boston from 1978-84, as did Eckersley). Here’s that story:

If you listen to nothing else this year, you must listen to Eck & Remy reliving their visits to Studio 54 in the 70s. Thank you, NESN. pic.twitter.com/I2bMQvx4Oa

“He dropped a Denny Disco on me, remember, because I went to Studio 54 the night before, if that had anything to do with it,” Eckersley said. Play-by-play broadcaster Dave O’Brien then asks what “Denny Disco” meant, and Eckersley said “Because I gave up five bombs the next day!” (Update; it seems he’s talking about July 1, 1979, where he really did give up five home runs in a 6-5 loss.)

Remy then said “You’re not supposed to tell anybody we went to Studio 54,” and Eckersley said “Yeah, that was a big deal back then. It really was, right?”

Remy then said “Yeah, they used to stand out in front, because they had the doorman out there, and it was like you had to be somebody special to get in there. Now, we got in because we played for the Red Sox, that’s the only reason we got in.”

“You had to have almost a costume on to get in,” Eckersley added.

O’Brien then asked for more stories, considering that the game was 9-0, and Eckersley said “Yeah, I shouldn’t have even gone there. I gave up five bombs, he gave up four, but I made it to the eighth!” O’Brien later said “There were some sights there, weren’t there?” and Eckersley said “There sure was. That was back in the day, I was just a kid, 23, 24 years old, I was in hog heaven.”

Later on, O’Brien talked about Eckersley being “a big hit there, in Studio 54,” and Eckersley told a story about club regular Andy Warhol.

“You know who I used to see in there, that artist, the guy who painted those tomato cans? Andy Warhol. You couldn’t miss him! An albino dude, sitting there. I’d say ‘I know who that guy is!'”

So, what was so unique about Studio 54? Well, as this April Rolling Stone piece relaying 10 of the best stories from the club’s heyday shows, it was a gathering spot for many of the biggest stars of the era. And it really was incredibly hard to get in:

“The key of the success of Studio 54 is that it’s a dictatorship at the door and a democracy on the dance floor,” club regular Andy Warhol once observed, and [co-owner] Steve Rubell ruled the velvet ropes with an iron fist. To achieve the perfect blend of guests for his nightly party, he often stood on a stepstool outside, selecting members of the crowd for admittance with a subjectivity that bordered on heartless. “It’s like mixing a salad,” he explained, “or casting a play.” Doorman Marc Benecke, then a 19-year-old student at Hunter College, served as Rubell’s deputy. “We had the kid who worked at McDonalds next to some movie star or some superstar model,” he said in the E! documentary. “Whether they were dressed in a festive way or they were interesting, high energy, danced well, or socialites, celebrities, models, you had to bring something to the table.”

The door code played upon the fundamental human quirk of desperately wanting what one can’t have. Those who were turned away often returned night after night, changing their outfits, hairstyles and company. Some tried to grease palms with thousands of dollars. Actress Jaid Barrymore, mother of Drew, bore witness to the ceaseless parade of lurid attire. “People were waiting in lines with the most fantastic costumes on, each one trying to outdo the other one so that they could be pointed to and get in.” One Halloween, two women, perhaps recalling the famous Bianca Jagger photos, took out a $500 loan to rent a horse, which they rode nude to the velvet ropes as twin Lady Godivas. The horse was granted entry. The women were not.

So yeah, that’s quite the place. And it was fascinating to hear Remy and Eckersley reminisce about it. “Disco Denny” indeed. Even David Price would find it hard to argue with that guy.