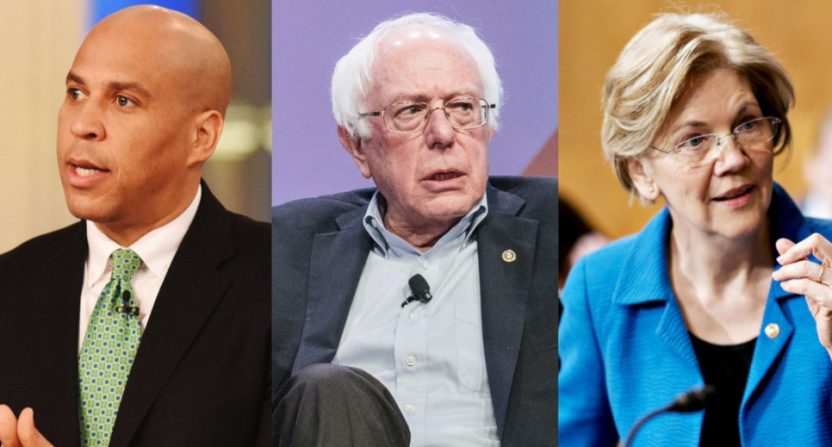 While Sinclair has already reportedly struck a deal with Charter for continued carriage of the former Fox regional sports networks, their purchase of those 21 RSNs from Disney hasn’t yet officially closed. Part of that is thanks to the transaction needing to pass review by federal bodies like the Department of Justice and the Federal Communications Commission. And now, three current U.S. senators and candidates for the Democratic nomination for president in the 2020 election have teamed up for a joint letter to Ajit Pai (the FCC chairman) and Makan Delrahim (the assistant attorney general in charge of the DOJ’s antitrust division) expressing their concerns about Sinclair’s purchase of those RSNs. That letter is signed by Cory Booker, Bernie Sanders and Elizabeth Warren (in alphabetical order), senators for New Jersey, Vermont and Massachusetts respectively (seen left to right above in an illustration from Vanity Fair).

“It is clear that Sinclair has an explicit interest in, and commitment to, relaying partisan political messages to its viewers — making its recent anti competitive expansion attempts into millions of additional households all the more concerning.”

…Booker, Sanders and Warren mention favorable coverage of President Donald Trump on Sinclair-owned stations as part of their cause for alarm, but they also focus on potential effects on pricing of popular sports programming.

“The RSNs Sinclair purchased from Disney — collectively ‘the largest group of commonly controlled RSNs’ — reach approximately 74 million subscribers across the country and have the rights to telecast the games of almost half of all the professional sports teams in three of the four major American sports leagues,” Warren, Sanders and Booker wrote in a letter dated Monday.

…“Sinclair, which now owns nearly two dozen RSNs, could market to distributors combinations of sports and local television channels that they have to offer to consumers as a bundle package,” the senators wrote. “Distributors understand the value of live sports and the limited number of un-bundled live sport streaming options available to consumers leave ‘sports fans … tethered to their cable bundle,’” the three senators explained. “Therefore, the agreement with Disney offers Sinclair an opportunity to charge consumers more by packaging their cable and broadcast programs.”

The concerns about Sinclair forcing distributors to pick up their sports and local channels together aren’t unique to these senators, as distributors themselves have expressed those sentiments. And there have been particular worries that this would lead to Sinclair charging huge per-subscriber price increases for the RSNs. However, the Charter deal reportedly included only a “slight increase,” and that deal was struck months ahead of the current agreement’s expiration (and before the Sinclair purchase even closed) and with apparently much less drama than many expected. Sinclair can possibly point to that as evidence that they’re not going to be as cutthroat on price increases as some had feared (although that deal doesn’t necessarily mean they won’t try to raise prices further in future extension talks with Charter or with other providers).

The discussion of Sinclair “relaying partisan political messages to its viewers” is also interesting, as that’s been well-documented when it comes to Sinclair’s local broadcast networks and it’s been cited as a concern about this acquisition by some. But there’s been no actual indication of Sinclair bringing explicitly political messages or segments to the sports networks at this point in time. Sports and politics are obviously fairly intertwined at this point, and it will certainly be worth watching to see if Sinclair winds up doing “must-run” national sports commentaries that have a particular political slant or anything. But in any case, it’s notable to see that brought up by these senators, especially as it might lead to a response from Sinclair that announces either plans to avoid politics on the RSNs or plans to do anything politically-adjacent there.

Overall, though, while DOJ/FCC approval of this deal isn’t certain, it does seem likely despite these senators’ concerns. On the DOJ antitrust side, it’s notable that this sale was compelled by the department’s agreement with Disney to allow the rest of the Fox/Disney acquisition in exchange for Disney selling off the RSNs, and that Sinclair prevailed in an open auction there for a price of around $10 billion. That price, even combined with the around $4 billion Disney got from the separate sale of YES to the Yankees (with Amazon and Sinclair as minority partners there), is way below the initial valuation of $20-22 billion for YES and the 21 other RSNs. So Disney was already punished by having to sell these networks for much less than they’d be worth to Disney, and punishing them again by overriding the sale they did actually make would certainly draw their ire. (That doesn’t necessarily mean they’d be successful in complaining about it, but they’d certainly complain, and they have a decent amount of influence.)

It’s also perhaps notable that there’s no obvious other option with less concerns. The final bids came from Sinclair, Liberty Media/MLB, and the BIG3/Carolyn Rafaelian/Centerbridge Partners. Liberty/MLB was a preferred winner for distributors, but there are potential antitrust issues with their bid as well, given that it includes a bunch of team owners (Liberty itself owns the Atlanta Braves) as well as MLB’s central office. And while the BIG3 bid didn’t have obvious antitrust issues, it carries a bunch of questions, from the debt-laden financing to the vague and unusual content plans to the preemptive FCC complaint that Charter wouldn’t carry the RSNs if they won to that league’s history of public disputes and legal battles. If the DOJ and/or the FCC did block Sinclair’s purchase of the RSNs, it’s unclear that either the Liberty/MLB bid or the BIG3 bid would receive less opposition from either politicians or the public, and the DOJ has already made it clear they don’t want Disney hanging onto these.

The other thing to keep in mind here is that even high-level politicians complaining about a merger doesn’t necessarily mean that merger gets stopped. For example, President Trump complained heavily about the AT&T-Time Warner deal both before and after his 2016 election, and the Justice Department certainly looked into it and actually filed opposition to it. But a federal judge wound up clearing that deal last summer despite the opposition.

That doesn’t necessarily mean this will play out the same way. There are arguments there’s more direct overlap between Sinclair’s local stations and these RSNs than with AT&T and Time Warner. But the AT&T-Time Warner case is worth considering, as opposition from the president and the Justice Department feels more likely to actually have an effect than criticism from three opposition senators, and even presidential opposition wasn’t enough to stop that particular acquisition. It’s certainly notable that Booker, Sanders and Warren are now on the record opposing this deal, and that may lead to further discussion of Sinclair’s acquisition of the RSNs and perhaps even some roadblocks or some required guarantees from Sinclair. But this opposition alone definitely doesn’t mean that the deal is doomed.