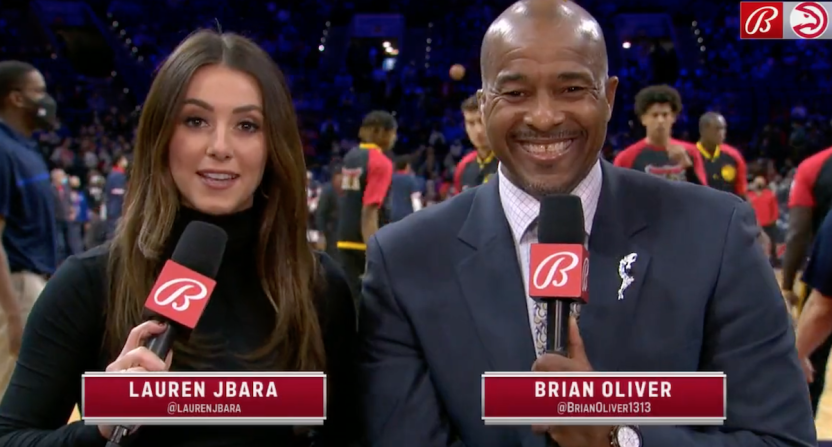 The NBA’s health and safety protocols for COVID-19 have taken many stars and rotation players off the court in recent weeks, resulting in postponements and lineups full of unknown players. The league’s five-game Christmas Day showcase could look very different with marquee names like Kevin Durant, Giannis Antetokounmpo, Luka Doncic, and Trae Young possibly being unavailable.

Team broadcasts have also been affected by the Omicron variant spreading throughout the league. That shouldn’t be a surprise with broadcasters and crew in close contact with players and coaches, often traveling with the teams they cover.

Bally Sports reports that Bob Rathbun has tested positive and is not calling tonight's game on TV. Lauren Jbara is.

“But guess what? Now it’s the ‘next broadcaster up’ mentality, Brian Oliver, because Bob Rathbun unfortunately, about 45 minutes ago, tested positive for COVID-19 and was placed on health and safety protocols.”

Jbara then told the audience that this was her first-ever play-by-play assignment. She found out she’d be calling the game less than a half-hour before tip-off too.

How it started: when I was told 27 minutes before tip that I would be on PxP ?

How it’s going: calling my first ever game!!!

Huge Hawks win. Next man up mentality. Soaking it all in. What a night to remember. #TrueToAtlanta pic.twitter.com/NZ9omtSWNk

Related: Kate Scott will be the new TV voice of the Philadelphia 76ers

As the New York Post‘s Andrew Marchand later noted, Jbara doing the Hawks telecast while Kate Scott was on the mic with the 76ers made for the first time that two women called play-by-play for each team in an NBA game.

I believe it is the first time two women are doing NBA play-by-play on the same game.

Kate Scott on the 76ers and Lauren Jbara on the Hawks.

Jbara is in for Bob Rathbun, who is out tonight due to COVID protocols.

A University of Michigan grad, Jbara was previously an in-arena host for Detroit Pistons games and a sideline reporter for Oakland University basketball broadcasts.

Being a studio host likely made the transition to play-by-play a bit easier, as opposed to moving over from reporter. But anyone who’s hosted studio coverage or called play-by-play would surely say that the two roles are quite different in terms of following the action and giving the audience frequent updates. Yet there are probably some similarities as well with explaining the situation to the audience and setting up the analyst for commentary.

We're missing @BobRathbunTV and @DWilkins21, but we've got Travis Schlenk on the broadcast to join Lauren and Brian for the start of the 2nd quarter. pic.twitter.com/FNRS0cN8eY

Lance to the rack. pic.twitter.com/vZWifRru6o

How did Jbara do, Hawks fans? Judging from Twitter, she performed well. Maybe fans cut her a break considering the situation, but she’s also a professional broadcaster who stepped up when needed.