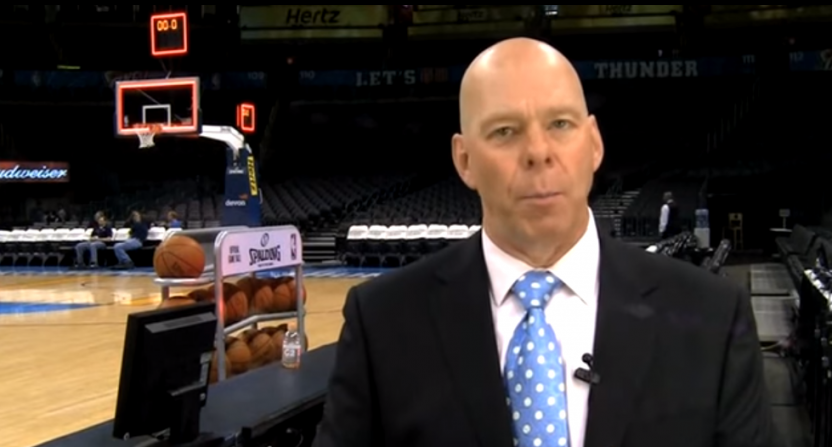 Back in April, Fox Sports Oklahoma play-by-play announcer Brian Davis’ “Westbrook is out of his cotton-picking mind!” comment on a broadcast of the Oklahoma City Thunder’s final regular-season game against the Memphis Grizzlies created a firestorm. The history of that phrase has long been debated, with some saying it’s inextricably tied to slavery given the history of cotton farming in the U.S., some saying it’s just a general shot at farmers regardless of race, and some figuring it’s a folksy expression without much of a literal meaning, but some certainly were annoyed by Davis using it, including his employers.

Thunder vice president of broadcasting Dan Mahoney said afterwards “We think obviously the use of that term was offensive and inappropriate,” and the team actually suspended him for their first playoff game. Davis said in a statement that his wording was “unintentional,” while offering “a sincere apology” and saying “This is an appropriate consequence for my actions,” and he returned to the air after that suspension, finishing out his 10th season with the team. But now, with Davis’ current four-year contract up, the team has decided to go a different way, announcing this past week that they’ll be looking for a new TV voice:

The team informed Davis on Friday that his contract won’t be renewed for the 2018-19 season and announced that, in conjunction with Fox Sports Oklahoma, it will “now begin the search for a new play-by-play announcer.”

Davis just completed the final season on a four-year contract. The Thunder offered no comment beyond a team-issued statement saying the club “has made a decision to go in a different direction.”

“We greatly appreciate Brian’s contributions to the Thunder organization over the past 10 years and we wish him well in the future,” the statement read.

Davis did not return a text message from The Oklahoman seeking comment but posted on his Facebook page that coming to Oklahoma City was “the best thing that ever happened to me” and that he’ll be “forever grateful, especially to (owner) Clay Bennett for asking me to be a part of” Thunder basketball.

There’s no explicit tie here to the suspension and to the comments, and it is of course possible that the Thunder would have decided to move on anyways. Teams sometimes look for a fresh voice even with no obvious cause, and it should be noted that Davis and analyst Michael Cage ranked 29th of 30 broadcast teams in our local announcer ratings in 2016, with a most-popular grade of F (almost 32 percent of the vote). Here’s our analysis (from Joe Mags of Crossover Chronicles) from back then:

Nearly one-third of the voters flunked the Thunder because of the exhausting top-down organizational stance that, “It’s us against the world.” Watching Russell Westbrook and Kevin Durant go to work shouldn’t be a chore, but every Thunder broadcast is filled with uncomfortable, defensive remarks against anybody not wearing Thunder colors.

Yeah, there are some clips that perhaps support that, and maybe the Thunder would have opted for a different approach anyway. Ten years is a long time in the announcing world, and maybe they were already looking to go in a different direction. But it seems relatively likely that Davis’ controversy-stirring comments were at least considered here, especially with the team expressing their disapproval publicly and handing him a suspension. And even with Davis’ apology, it may have been easier just to move on, especially with his contract already expiring.

There may be some comparisons here to former ESPN freelance tennis announcer Doug Adler, who sued the network after they parted ways with him following the “guerrilla/gorilla” debacle. ESPN argued there that they didn’t fire Adler, but merely pulled him off air and paid him for what he was contracted for, and that they’re under no obligation to hire him for further events. Similarly, the Thunder haven’t said anything specific about this incident in connection to their decision to go a different way, and from the outside, it would be difficult to prove that this was the primary reason why. But it certainly seems likely that this controversy played a role.

[The Oklahoman; screencap from a 2011 Oklahoma Journal-Record interview with Davis]