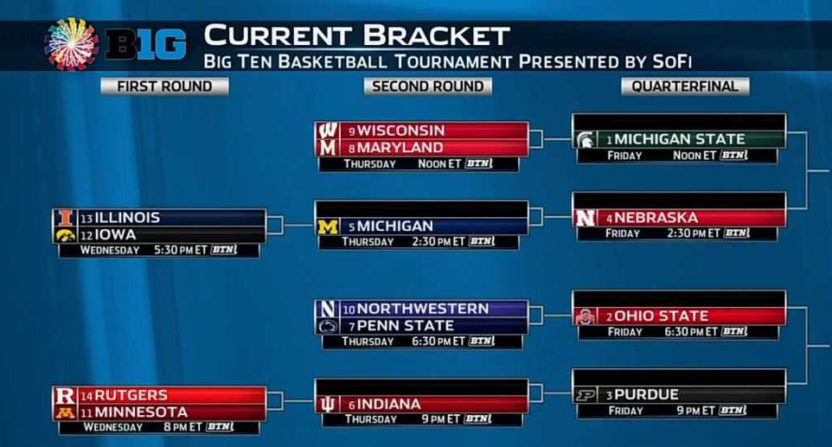 The Nielsen cable coverage estimates are always an interesting way to track just how big different sports networks are, and April’s numbers have some particularly notable information for several league networks. Sports TV Ratings has posted the April estimates, and there are some significant changes from the March ones we last covered. Here’s a table for many sports-focused networks based on that data, showing both the March-April changes and the changes since February 2017, with all numbers in thousands of households. (For networks where February 2017 estimates weren’t provided, the “February 2017-April 2018 change” column is the August 2017-March 2018 change. Also, you can click to embiggen.)

Some of the most notable takeaways from the April numbers are related to league networks. The Big Ten Network saw the largest month-to-month increase of any network in this table, picking up 1,716,000 households, perhaps bolstered by people adding it to watch the Big Ten tournament or by it moving into a better tier on some services. However, the news was rougher for other league networks, with MLB Network (-641,000 households), NFL Network (-594,000) and NBA TV (-391,000) all suffering significant drops.

On the non-league network front, ESPN is still in the lead amongst sports-only channels (TBS and TNT have more subscribers, but much of their programming isn’t sports). ESPN2 is still next, NBCSN is next outside of ESPN channels (they passed FS1 in February and have stayed ahead since then), and FS1 is next and significantly ahead of the league networks. ESPN, ESPN2, and FS1 saw little March to April movement, while NBCSN saw a loss post-Olympics, but not enough to knock them back to FS1.

As usual, this data comes with caveats. It may not show the entire impact of streaming services (Nielsen projects there are 2.7 million streaming-only homes in the mix here, a rise from the 2.5 million last month, but their TV panel doesn’t include a huge number of streaming homes). And the month-to-month data can fluctuate significantly, which is why it’s interesting to look at the longer-term picture. There, the trends from last month seem to be mostly continuing: ESPN and FS1 are both holding reasonably steady for now, but both are down around a million (around 1.1 million for ESPN, around 900,000 for FS1) since February 2017. League networks have been hit even harder there, with MLBN, Golf Channel and NBA TV all dropping around 5 million households over that span. But NBCSN has grown nicely in that time, as has BTN (albeit with all that growth coming this month after a bunch of decline), FS2 and The Tennis Channel.

Overall, the good news for ESPN and FS1 is that their numbers of lost subscribers seem to be stabilizing a bit, likely bolstered by streaming services. That matches what Disney’s Bob Iger has been saying about the benefits from those services. However, many of the league networks are still being hit hard, and that may be a byproduct of cord-shaving and cord-cutting. That only adds to the impetus to have high-quality content on your channel, especially live games, and that’s something that will be important for all these networks going forward.