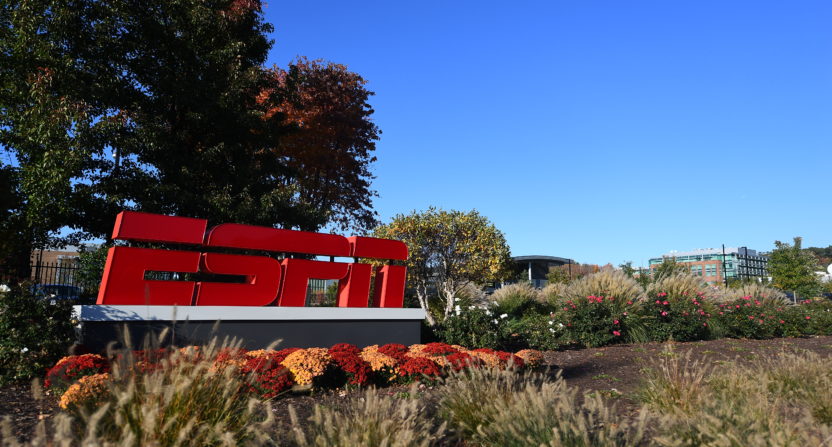 We last checked in on Nielsen cable coverage estimates in December, discussing how the estimates of homes both ESPN and FS1 are in had dropped both from November to December and since February and August 2017. Sports TV Ratings has a new set of those numbers posted, this time covering February and March 2018.

As always, this data comes with caveats. It may not show the entire impact of streaming services (Nielsen projects there are 2.5 million streaming-only homes in the mix here, but their TV panel includes 161 streaming-only homes and around 40,000 homes altogether). And the month-to-month data can fluctuate significantly, which is why it’s interesting to look at the longer-term picture.

But first, the short term; the most notable takeaways here (February 2018-March 2018 change column) are how ESPN’s actually risen by 49,000 homes (providing some backing for Disney CEO Bob Iger’s regular remarks about streaming services helping them stem the tide of subscriber losses), and NBCSN is up by 646,000, while FS1 has fallen by 46,000 and FS2 is down 474,000.

The larger picture here is also notable as a look into how these networks are affected by cord-cutting over time. In just over a year, ESPN is down almost 1.1 million homes, while ESPN2 is down over 1.1 million and ESPNU is down over 4.5 million (part of the lessened carriage emphasis on that channel). FS1 is down 974,000 homes in that time, but FS2 is actually up almost 8 million homes, so its coverage picture, while still not great compared to many networks, is substantially better than it was around this time last year.

As for TBS and TNT (which, of course, aren’t entirely sports), they’ve been affected by cord-cutting too, but seemingly not to the extent that ESPN and FS1 have (although the data for them starts later), and they still have significantly more coverage than either of those networks. Elsewhere, it’s been a very good year for NBCSN, up over 2 million, but a rough one for league networks, with BTN down 457,000, NFLN down almost 1.5 million, and Golf Channel, MLBN, and NBATV down around 4 to 5 million each. Shoutout to The Tennis Channel for gaining almost 11 million homes, though.

The overall standings in the March 2018 estimates have TBS and TNT with the most coverage, followed by ESPN and ESPN2. It’s interesting that NBCSN is next ahead of FS1, as that’s a change from where the two networks stood a year ago. Golf Channel then has the most coverage of the league networks, followed by NFL Network, MLB Network, Big Ten Network, The Tennis Channel, and NBATV. And despite its year-over-year decline, ESPNU is still quite respectable, coming in between NFLN and MLBN. Meanwhile, The Sportsman Channel continues to not have much carriage (and its Wikipedia entry estimates it was available to 34.1 million households in February 2015, so it’s fallen a long way since then), but it’s ahead of beIN.

What does this all mean? Well, the real big picture shows that both ESPN and FS1 have fallen a long way in the last five years, as they were in an estimated 98,516,000 and 90 million homes in 2013, and are down to around 87 and 84 millon respectively now. But in the shorter term, ESPN would certainly be happy if they can maintain a trend of no subscriber losses or perhaps even some growth. Their forthcoming launch of over-the-top service ESPN Plus may help mitigate cord-cutting damage, but ESPN subscriptions (through either traditional cable or satellite or newer streaming bundles) are still their core business, and it’s positive for them to see those at least dwindling at a smaller rate recently. NBCSN continues its trend of rising in coverage, and is maybe buttressing its case as the top non-ESPN all-sports network  (disregarding ESPN2 and disregarding the Turner networks, which aren’t completely sports).

As for Fox, it’s certainly helpful that they have FS2 growing, making it a bit of a better place to put overflow content. However, it still has poor carriage relative to the likes of ESPN2 and relative to the likes of Fox Business’s estimated 84.5 million, so some college football games are likely to land on Fox Business again this year. Also, the year-over-year FS1 subscriber losses aren’t too bad (and are smaller than the magnitude of ESPN’s year-over-year losses), but the recent trend there is a bit concerning, and suggests they may be getting less help from streaming bundles than ESPN is. And these numbers show there’s still a pretty significant coverage gap between ESPN and FS1.