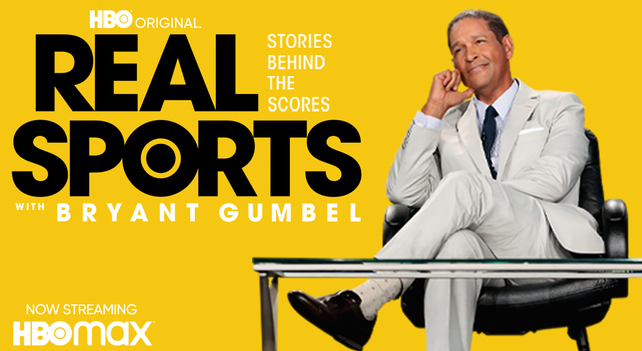 Tuesday night at 10 p.m. ET/PT, HBO’s Real Sports with Bryant Gumbel will debut its 300th episode. Ahead of that, senior coordinating producer Nick Dolin (who’s been with the show since its second episode in 1995), spoke with AA about the show’s past and present, and said they haven’t changed what they’re looking for in stories.

“The idea was always a good story well told. That was always the idea; deep reporting, long-format storytelling. That has not changed. Hopefully we’ve just gotten a little better at it. The idea is to tell stories that we think are interesting, informative, important, entertaining, and relevant, and tell them as well as we can tell him.”

He said there are a lot of internal checks on any story before it airs, and those include discussion of if it will go beyond sports.

As per his own connection to Real Sports, Dolin said that started with his work with famed sportswriter Frank Deford at The National.

“I got there in 1995 as an associate producer. I came from The Charlie Rose Show, and I’d been in print before that at places like New York and Esquire as a fact-checker and a reporter. I was actually at The National sports daily, where I worked for Frank Deford. I stayed in touch with him, and when the announcement came that HBO was going to start Real Sports and Frank Deford was going to be on it, I reached out to Frank and he got me connected with the folks at HBO, and I was lucky enough to come on in time to work on show #2. I’ve been at HBO ever since. I also produced the Costas show for a few years, and I worked on the Joe Buck show as well, but I’ve been with Real Sports since show #2.”

“We always look for an interesting central character. Take the 300th episode, the show that’s on tonight, with Rodney Stotts. That’s a classic Real Sports story, someone you’ve never heard of in a sport you know nothing about. And it’s not really about sports. It’s about a man’s journey in life and how he went from being a drug dealer in Washington, D.C., where he saw almost everybody he worked with get killed or end up in drug addiction, and he ended up helping save the eagle in DC and reintroducing it by cleaning up the environment.”

“The reason that that’s a classic Real Sports story is at the center of it is a human being who was lost. And through sport, the sport of falconry, he found a way to live life, and contribute to the city which he was born, and survive. Those are the kind of stories that Bryant loves to do, and that we’ve been doing for 300 episodes.”

It’s certainly interesting to see Real Sports succeed with this approach in an era where so much of many documentaries’ focus has been on the subject rather than the storyteller. And Dolin said he thinks they’ve built up enough trust with their audience that they’ll watch even the segments on less-prominent figures.

“I think it’s the power of a good story. We believe if you find a good story and tell it well, the audience will be engaged and they’ll watch. And that’s what’s happened.”

Of course, though, Real Sports does still feature a lot of prominent athletes. And Dolin said that works for them when there’s something to add.

“We certainly do plenty on high-profile athletes. But those are hard to get, and you can’t fill up the whole show with those. But if we think there is an important story to be told by a high-profile athlete, and we feel we can tell it with integrity and add something to that person’s story, then you’ll see it on the show.”

He said their recent segment on Jalen Rose’s tuition-free charter school in Detroit is an example of that.

“Jalen Rose is a great example. He’s a guy who’s been in the public eye now for 30 years, but whose heart is really in Detroit where he’s from. And we wanted to tell a story about why this guy [started and runs his school]. Basically, this guy grew up loving school. By his own description, he was a nerd. He loved school so much that when he was famous, he wanted to give kids an opportunity to go to school the way he did. And that’s a classic Real Sports story…Jalen Rose has created opportunity for thousands of kids over the last 10 years, in a city that really has struggled to educate its children, so that’s a classic example of a famous person on Real Sports that’s what we look for.”

“I think of it in terms of three things: his boundless curiousity, his extraordinary ability to interview people, and his unwavering journalistic integrity. That’s really what makes Bryant unique, that combination and that intensity.”

And Dolin said he thinks there’s plenty of room ahead for Real Sports and its approach of looking beyond just the sports world.

“Sports is an enormous part of our culture, and it provides an endlessly interesting way to see intersections with society, the intersection of sports and politics, culture, entertainment. It’s a way to see the world, it’s a way to learn from the world, it’s a way to teach about any possible subject from race to gender to politics, all of the things that we’ve been reporting on for 300 episodes. And there’s just an endless number of stories to tell.”

The 300th episode of Real Sports will premiere on HBO at 10 p.m. ET/PT Tuesday, and will also be available to stream on HBO Max.