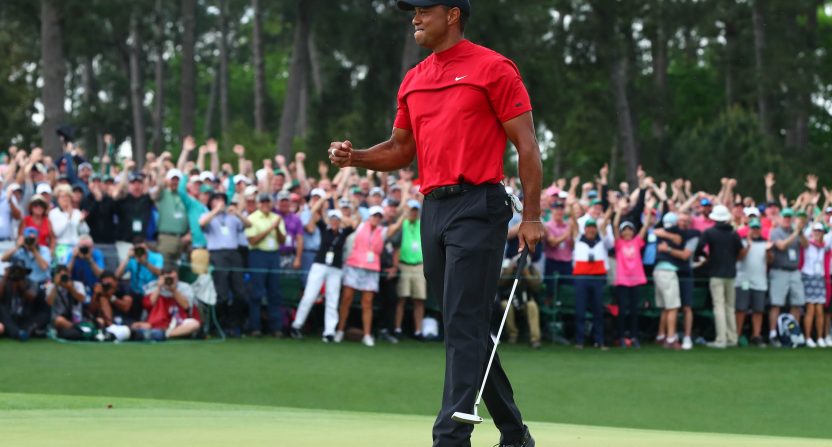 Last month, news emerged of a two-part Tiger Woods documentary heading to HBO thanks to comments from Armen Keteyian (it’s based on the 2018 Tiger Woods book he wrote with Jeff Benedict, and they’re both executive producers on the project). Keteyian revealed that the series would be directed by Matthew Heineman and Matthew Hamachek, and would have Alex Gibney as an executive producer. On Thursday, HBO officially announced the film, called TIGER, and provided airdates of December 13 and 20. Here’s more from their release:

HBO Sports and Jigsaw Productions in association with Our Time Projects are in production on a two-part documentary series illuminating in sweeping scope and vast detail the rise, fall, and epic comeback of global icon Tiger Woods. Alex Gibney (Academy Award® winner for “Taxi to the Dark Side,” nominee for “Enron: The Smartest Guys in the Room,” and Emmy®-winner for HBO’s “Going Clear: Scientology and the Prison of Belief”) executive produces alongside Sam Pollard, Stacey Offman, Richard Perello, Armen Keteyian and Jeff Benedict. Academy Award nominee and Emmy®-winning filmmaker Matthew Heineman (“Cartel Land,” “A Private War”) and Emmy® nominee Matthew Hamachek (“Amanda Knox”) serve as directors of the two-part television presentation. Part one of TIGER will debut SUNDAY, DECEMBER 13, with part two airing SUNDAY, DECEMBER 20, exclusively on HBO.

“Since his introduction to the world at the age of two, Tiger Woods has inhabited our collective consciousness as a prodigy, a pioneer, a champion, a global icon, and then a tabloid headline,” said directors Heineman and Hamachek. “After months of research and countless hours of revelatory conversations, we discovered that he has always been a projection of outsized expectations. His father, his sponsors, and his fans all made Tiger Woods into whom they wanted him to be. Our goal was to dive deeper and create an unflinching and intimate portrait of a man, who like all of us, is imperfect and inherently human.”

“This is an epic tale,” said executive producer Alex Gibney, “For sports fans and for anyone interested in the pursuit of greatness and the price of ambition paid by athletes, particularly when parents and the society-at-large push them to win at any cost. The directing team of Matthew Heineman and Matthew Hamachek have used their extraordinary cinematic talents to tell a riveting story.”

As that release shows, there are some big names involved in this. And while Gibney’s non-sports credits are featured in that release, he’s done a lot in the sports world as well, including directing 30 for 30s Catching Hell and Ceasefire Massacre, directing the six-part Enhanced ESPN Films series for ESPN+, and directing 2013’s The Armstrong Lie. And Keteyian and Benedict’s book won a lot of praise when it came out, so having this based on that book and having them involved as executive producers seems positive too.

A Tiger Woods documentary is obviously going to be challenging given the off-course controversies of his career, and this one isn’t expected to involve a new interview with Woods himself (not surprising, given his refusal to participate in Keteyian and Benedict’s book; it’s instead based on interviews with more than 250 other people about him, as well as his various other interviews and comments over the years). But there is plenty of footage out there of him, and there’s a strong list of people who are listed as interviewees here. That list includes Nick Faldo (who played against Woods early in Woods’ career, and who has been a prominent TV analyst for much of Woods’ career), Steve Williams (Woods’ former caddy, who blasted Woods in a 2015 book), Pete McDaniel (friend and biographer of Tiger’s father Earl Woods), and “Tiger’s first true love, Dina Parr.”

And perhaps most notably, this will involve “Rachel Uchitel, the woman at the center of the sex scandal that forever altered Tiger’s world, breaking her silence for the first time.” So this should produce some new comments on that front. And there will definitely be plenty of people interested in a Woods documentary, and the team involved here has a strong reputation. It also might be nice to see a sports documentary on a controversial figure that focuses on how they’re seen by others, as both The Last Dance and Lance took some criticism for the way they presented the central figure’s perspective; Tiger shouldn’t have that particular issue. We’ll see how it turns out.