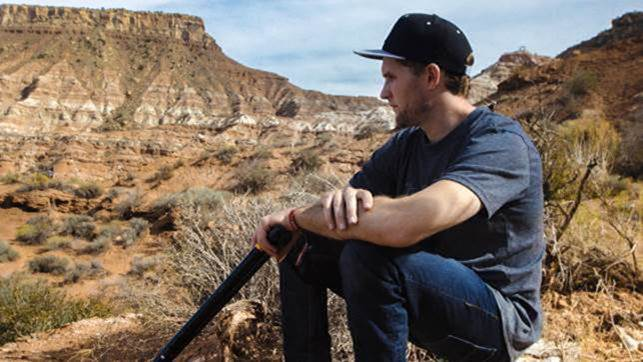 We can add another one to the list of upcoming HBO Sports documentaries. HBO Sports has quite a bit of documentary content premiering over the next few months, including Diego Maradona (Oct. 1), Lindsey Vonn: The Final Season (Nov. 26), Belichick and Saban: The Art of Coaching (Dec. 10) and Well Groomed (a to-be-announced date in December), plus the college football 24/7 series they unveiled this week. And now, they’ve announced Any One Of Us, a documentary from Red Bull Films on pro mountain biker Paul Basagoitia’s journey to recovery following an October 2015 crash that saw a burst fracture of his 12th vertebra and a partially-severed spinal cord. The documentary, directed by Fernando Villena, will premiere on HBO Tuesday, Oct. 29 at 9 p.m. ET/PT.

Basagoitia started biking as early as two and was winning BMX contests by age seven, and he won his first major competition while still in his teens, taking the Crankworx mountain bike slopestyle title in 2004. He repeated that win the next year, then went on to further success, including becoming the first person to complete a 720 on a mountain bike and landing the first double backflip on natural terrain. But a crash at the Red Bull Rampage event in Utah in 2015 led to that partially-severed spinal cord, and it led to him documenting his recovery journey.

Basagoitia started recording videos about that experience while still in the first days in the hospital. Nine months into his recovery, Red Bull Films and Villena started working with him to make a full documentary about his journey, with the goals of raising awareness of spinal cord injuries and helping others who are dealing with those. The documentary premiered at SXSW earlier this year, and drew some solid buzz. Here’s more from HBO’s release on it:

The feature-length presentation marks the first-ever partnership between HBO Sports and Red Bull Films, telling a story that begins on October 16, 2015, the date of Basagoitia’s traumatic injury, and unfolding in real time through raw, intimate footage — much filmed by Paul himself — of the agonies of an unpredictable journey and uncertain future. Directed by Fernando Villena, the film features a chorus of other diverse SCI survivors, shining a light on the struggles that Basagoitia and all SCI patients confront every day, and the hope that drives them.

“ANY ONE OF US is an incredibly raw, emotional, and impactful film,” says Peter Nelson, Executive Vice President, HBO Sports. “Paul’s story is unforgettable, and an extraordinary case study of what SCI survivors deal with on a daily basis as they work to recover from their injuries. We are proud to be associated with Red Bull Films and this production, and are excited for our HBO audience to discover this story.”

This sounds like quite the story of perseverance, and one that has quite a bit of potential. We’ll see how it turns out.