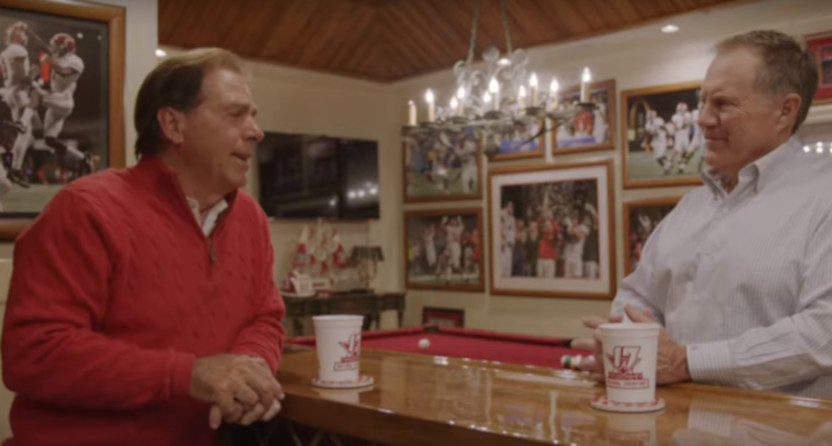 There’s another sports documentary coming to HBO this fall, and this one’s on famed coaches Bill Belichick and Nick Saban. HBO’s already-announced lineup includes Diego Maradona (Sept. 24), Lindsey Vonn: The Final Season (Nov. 26), and Well Groomed (a documentary on competitive dog grooming, premiering in December.) On Tuesday, they announced another December premiere for a new feature-length documentary in partnership with NFL Films: Belichick and Saban: The Art of Coaching, premiering on HBO December 10. Here’s a teaser trailer, which will also air on HBO before and after Tuesday’s Hard Knocks finale.

And here’s more from HBO’s release:

…“Bill Belichick and Nick Saban have earned their rightful place in the pantheon of greatest coaches ever, across all sports, and this film intimately spotlights their woven history from Navy to Cleveland to now,” said Nelson. “It will capture for the first-time ever some of the most engaging and personal conversations held every year by the two most towering figures in the game today. We are excited to partner with NFL Films to tell this unique story of friendship and mentorship.”

“Bill Belichick and Nick Saban have become the modern versions of Vince Lombardi and John Wooden – symbols of success not just in sports, but in life,” said Ross Ketover, Chief Executive of NFL FILMS. “Their lessons on leadership are an inspiration; not just for those of us who love football, but for anyone who wants to thrive at whatever passion they pursue.”

That opening clip of a combined interview with Belichick and Saban is certainly interesting, and the release promises “unprecedented camera access to their annual coaching retreat,” plus “one-on-one interviews and extensive inside access captured over the past three decades.” And there will be plenty of interviews with others as well, including Ozzie Newsome, Kirby Smart, Josh McDaniels, the coaches’ families and more.

There’s also a notable story here given the coaches’ shared history, which started when Saban was working alongside Belichick’s father Steve at the Naval Academy in 1982 and extended through time with the Cleveland Browns (with Belichick as head coach and Saban as defensive coordinator). And Rodgers has a history of directing impressive NFL documentaries, including Hard Knocks and 30 for 30 installments Elway to Marino, Four Falls of Buffalo, The Two Bills (which also covered Belichick’s relationship with another coach, Bill Parcells in that case), and Deion’s Double Play. We’ll see how this one turns out, but there’s certainly a lot of potential there.