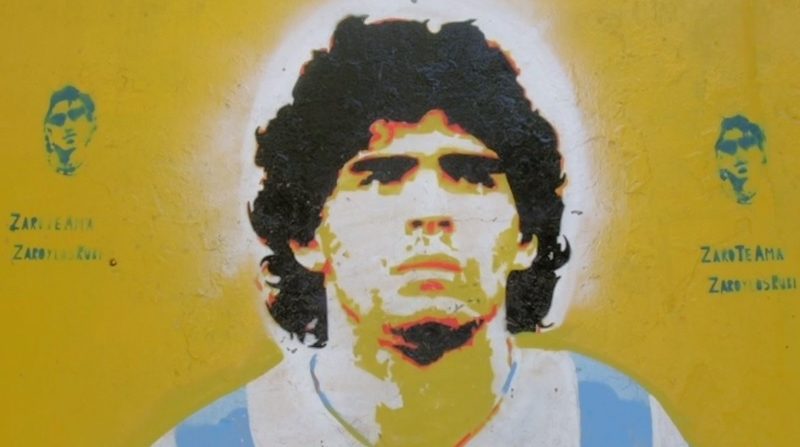 HBO’s Diego Maradona starts off with a rush of adrenaline, with the viewers behind the wheel of a car speeding through the streets of (what I assume is) Argentina. 1980s techno music blares throughout the introduction of the film, which consists of a series of archival clips summarizing Maradona’s career, from his early days at Boca Juniors to his tumultuous tenure at Barcelona. The doc really starts with Maradona’s introductory press conference at Napoli, a reporter asking Maradona a question about the Camorra (essentially, the Neapolitan mafia), and off we go.

If you’re looking for a full-blown examination of Maradona’s entire career, this isn’t the film for you. Director Asif Kapadia doesn’t spend much time on Maradona’s youth, his time with Boca Juniors and other Argentinian times, or even his two rough years at Barcelona. The focus begins with Maradona’s time at Napoli, where he became such a legendary figure in world football, and goes from there.

Kapadia’s approach to this film is interesting. The use of archival footage was discussed often in interviews, press releases, and other descriptions of the film, but what wasn’t mentioned is that the film is nearly *all* archival footage. Kapadia doesn’t cut away to interviews filmed recently to get their take on Maradona over the course of the film. Instead, he uses those interviews over top of the decades-old clips to describe Maradona’s trials in Italy and elsewhere.

It’s important to note that the bulk of this film is not in English, and as a result, it’s heavily subtitled. This results in some captions you probably haven’t seen before in any format, which is way better than just hearing a crowd chanting it.

For example, these came in the early part of the film, when the hatred of Napoli by rival fans was being discussed. 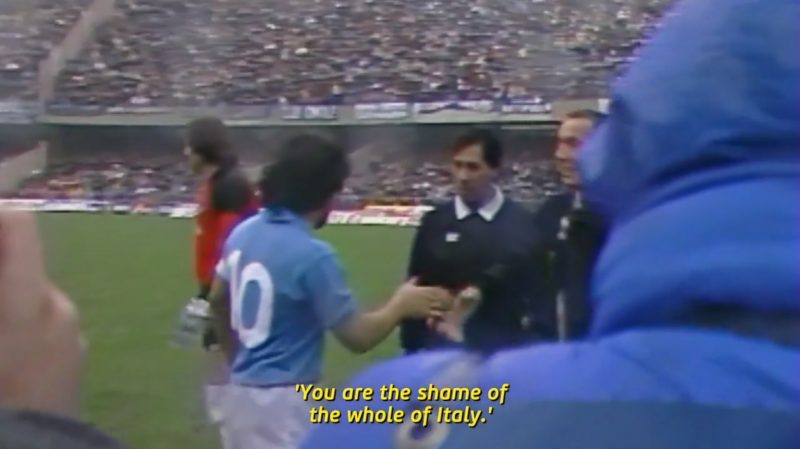 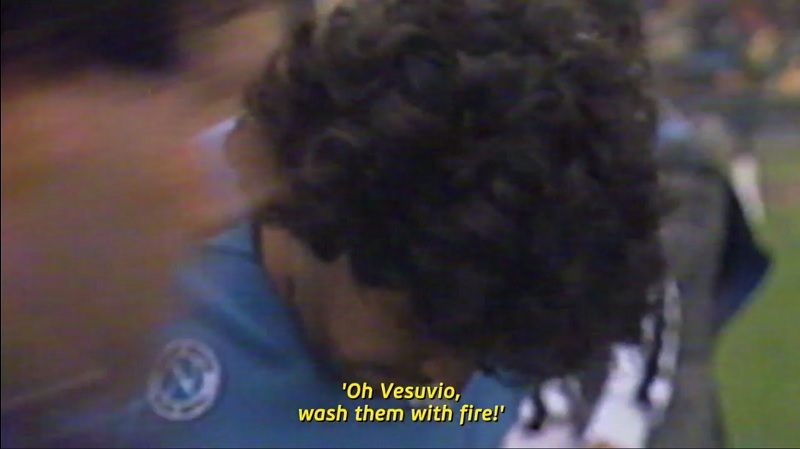 Kapadia keeps the film moving forward quite well, and doesn’t dwell on flashbacks too often. When he does, they’re generally relevant to where his story is at the moment. For instance, prior to the 1986 World Cup quarterfinal against England (which contained Maradona’s infamous “hand of God” goal and his incredible solo “goal of the century”, both covered in ESPN’s Soccer Stories Maradona ’86 30 for 30), the all too relevant memories of the Falklands War were brought up with footage of the war itself. This keeps Kapadia’s story focused and moving forward, rather than constantly branching off, stepping back in the timeline, or talking about topics irrelevant to Maradona’s story.

The greatest strength of Diego Maradona is that it doesn’t need extra narration. The story just makes sense from the way the clips are strung together. It’s the tale of a man who goes from an unproven, highly coveted prodigy to an icon, winning Argentina’s second World Cup in the summer of 1986 and Napoli’s first Serie A championship less than a year later, winning another championship with Napoli as his life begins to go completely off the rails.

So much of the footage speaks for itself. Four months after the 1990 World Cup, Maradona silently sits at a Napoli team Christmas party, looking like he’d rather be anywhere else. The anguish on Maradona’s face at Napoli training is clearly evident after his involvement in a drug and prostitution ring run by the Giuliano clan of the local Camorra is reported by local authorities. In earlier times in the film, Maradona’s joy at his accomplishments on the pitch and when he’s with his children need no further explanation.

On a somewhat unrelated note, the video quality of the footage used in the film is stunning. Maradona’s ex-wife Claudia reportedly had hundreds of hours of it in a trunk, untouched for years. It was preserved extremely well, and only enhances the quality of the film itself.

Some may have an issue with how the film ends, but you really can’t script life. Maradona never got that happy ending after he left Napoli following a drugs ban in 1991. He battled both cocaine addiction and alcoholism in the years to follow, while also dealing with other health issues. In a footballing sense, he’s also largely remained out of the spotlight. Maradona managed Argentina to qualification for the 2010 World Cup and a spot in the quarterfinals, but was essentially dismissed after getting blasted by Germany in the final eight match. Since then, he’s remained a mostly peripheral figure in the football world at large, aside from meme-worthy goal celebrations during the 2014 and 2018 World Cups.