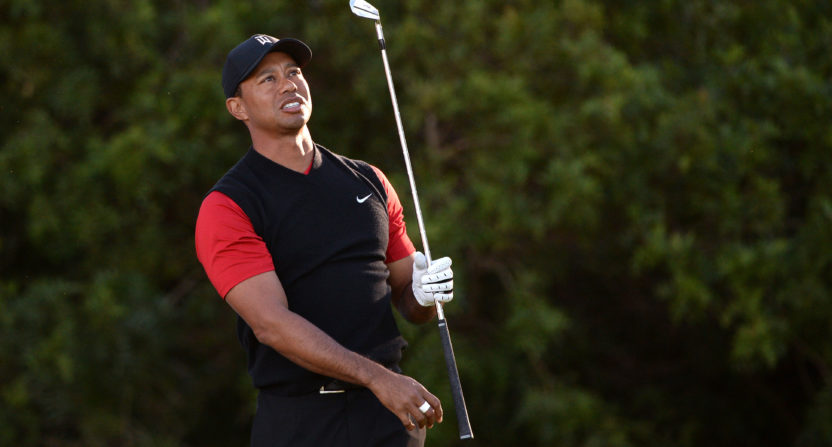 The PGA Tour got some much needed good news this weekend. Tiger Woods returned to competitive action at Torrey Pines. And even better than that — he didn’t re-injure himself and he didn’t miss the cut!

Woods was the major story as the PGA Tour continued its West Coast swing, as he always is any time he tees it up. While Woods played well enough to make the cut, he was never in any real kind of contention. Tiger finished T-23 at -3, which was seven shots out of a playoff won by former world number one Jason Day.

The Top 25 finish is a significant improvement from the same tournament last year (his only other competitive appearance since 2015) when he missed the cut after shooting +4 in the first two rounds. And in fairness, it’s night and day from where Woods was in 2015 when he was missing the cut in the final three majors of the season and struggling to break 75.

Even though Woods was not close to having his name on the leaderboard, you knew he would be a focal point of CBS’s coverage. And his mere presence seems to have paid off.

According to Sports Media Watch, this week’s tournament posted a five-year high in ratings for the Torrey Pines event. Sunday’s coverage earned a 2.6 rating and 4.1 million viewers, up 30%/32% versus last year when Woods missed the cut and a whopping 73%/78% from when Woods did not appear.

It’s the highest number since 2013 when the tournament had a 3.2 final round Sunday rating. You’ll never guess who lifted the trophy that year — Tiger Woods.

The numbers for Saturday’s action were even more indicative of the kind of boost Woods can still bring the PGA Tour. Via SMW:

That’s an incredible factoid. And that was even with coverage being delayed, angering some golf fans. To think that Woods can still move the needle in such a way for the PGA Tour, seeing its best non-major Saturday in a year and a half, is a testament to just how unique his drawing power truly is. Woods hasn’t won a major in almost 10 years. It’s been five years since his last PGA Tour victory. And yet he’s still the biggest star that the game of golf has.

Golf continues to wrestle with living in an era that doesn’t have Woods’ dominance to carry it into the mainstream. There have been some small strides made in recent years with the likes of Spieth and Thomas and others rising to the forefront. But golf will always be better off when Tiger Woods is on viewers’ screens.