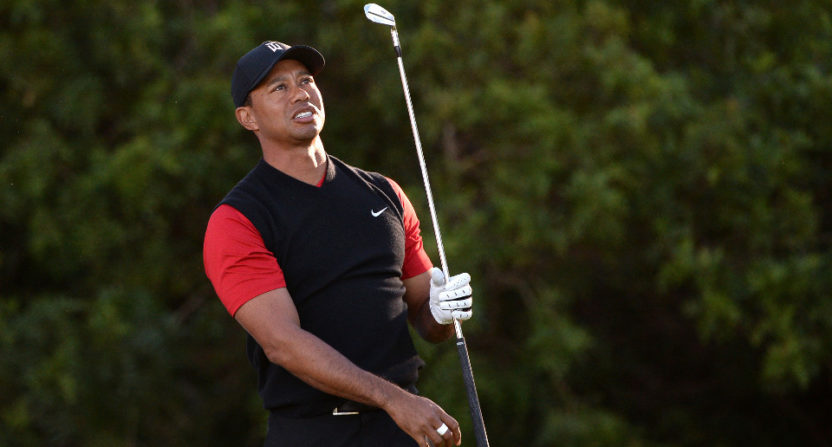 Sports events running long and delaying or moving other broadcasts often creates some consternation, and that’s perhaps particularly strong when the events in question are from two different sports. That happened Sunday, with CBS’ college basketball broadcast of No. 6 Michigan State at Maryland running long and the network then opting to air a post-game interview with Michigan State head coach Tom Izzo before heading to their Farmers Insurance Open golf coverage 21 minutes behind schedule.

With that tournament at Torrey Pines being CBS’ first of the 2018 season, and with it featuring Tiger Woods’ much-anticipated return to the PGA Tour (his first tour tournament since the same event last year, where he missed the cut, his second competitive tournament of any kind (the other one was December’s Hero World Challenge in the Bahamas) since January 2017, and his first time making the cut at a PGA Tour event since August 2015), there were a lot of people looking to watch it.

The network did offer live-streaming of the golf coverage while the basketball was still ongoing, but that coverage saw several complaints, and there were still a lot of people looking to watch it on TV. And boy, were they mad about the delay:

TFW you flip over to @CBSSports because #FarmersInsuranceOpen coverage starts in 3 minutes and you see there is still 2:31 left in the basketball game and you know that really means like 15 minutes..

Come on @CBS I️ don’t care what Tom Izzo says about a January game against Maryland start the damn golf!

15 minutes after golf coverage was supposed to start at @CBS is interviewing Izzo. Either plan for longer than 2 hour game windows or stop this bonus coverage. The game is over.

@CBSSports @CBS Follow your schedule. Golf was supposed to start at 3:00. Understand showing overtime, but a coach interview too? C’mon man. Definitely didn’t skip any commercials.

Stick to talking to a guy who may be in the midst of covering up a sex scandal instead of moving over to golf coverage on time. Makes sense CBS.

Hey @CBS nobody cares about ncaa basketball in January. Please stop showing it over golf.

@CBS put fucking golf on and get out do god damn commercials.

Must be nice to watch. We're forced to watch college basketball instead. I'll be boycotting the sponsors in response. FYI, @WeAreFarmers and @FedEx

Two CBS suits having a meeting:
First suit: Which would get better ratings, a postgame interview with Tom Izzo or Tiger Woods playing golf?
Second suit: WTF? Are you a moron? How did you even get this job?

3:21pm ET. First live golf shot on the @CBS @PGATOUR coverage scheduled for 3:00pm. Of course it was tiger, 8 strokes back.

While much of the criticism here is a bit over the top, the sentiment behind it is at least somewhat understandable. This was a highly-anticipated final round, especially with Woods’ involvement, and going to that 21 minutes late is annoying for those who made plans to tune in right at the start of the coverage and didn’t care about the basketball finish. And that’s perhaps even more annoying when there’s a coach interview and commercials in that time before the shift to golf.

But this is also understandable from CBS; this is an important basketball game, and they’d take just as much criticism or more if they cut away from it early and went to golf. CBS also wasn’t able to put either event on CBS Sports Network, as that channel was showing a different NCAA basketball game (SMU-ECU).

And while the post-game interview may seem excessive, there was some journalistic value there given the ongoing discussion about sexual assault, violence against women, and cover-ups of problematic actions at Michigan State, which led to the resignation of athletic director Mark Hollis this week and saw Izzo and the men’s basketball team under fire (especially over their handling of former graduate assistant Travis Walton).

CBS did ask Izzo for a statement, even if they didn’t really get one (he discussed the matter a little more in his post-game press conference, which included a thorough grilling from an ESPN reporter, but still didn’t say much), and it’s understandable why they felt that was worth doing even with the game over time (and they would have been criticized if they hadn’t). But it’s also understandable why that further aggravated golf fans waiting for their event to start.

It’s not clear that CBS had any better options here given the circumstances in how this played out, but this is one more case in point of the challenges in scheduling sports events close together. If all goes well, that can be great; most programming benefits from a strong lead-in, even from a different sport, and if the basketball game had ended on time, limited lag before golf might have kept some of those viewers around while not alienating golf fans. But when something runs overtime, there’s bound to be a whole lot of criticism. We certainly saw that Sunday.