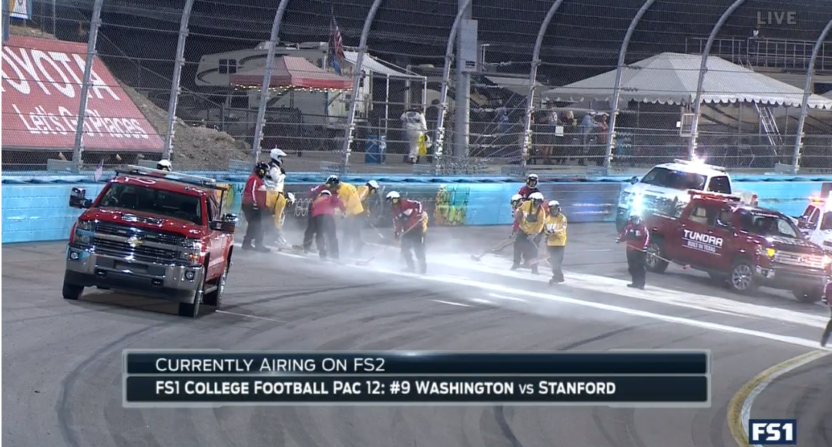 Washington-Stanford delayed from its 10:30 PM Friday night kickoff because of World Truck Series on FS1. The jokes write themselves.

Washington vs. Stanford delayed to 10:45 PM East Coast kickoff… BY TRUCK RACING!
The Art of the TV Deal. By Larry Scott.

And then after crashes and red flags in the truck race, FS1 still missed the entire first quarter of the Washington-Stanford game anyway.

When FS1 finally was ready to show the football game, the first quarter was concluding and going to commercial break.

The game was also shown on FS2 and the Fox Sports Go app during the first quarter, but many people don’t have FS2, and the app option can be a pain in the ass (especially if you went to a bar to see the game or are trying to watch with several people).

This is the second straight week a Stanford game hasn’t started on the Fox network it was supposed to, with the Stanford-Washington State game being moved from Fox to Fox Business Network last week while Michigan State-Penn State was in a weather delay. That’s after a Michigan-Purdue game was moved from Fox to Fox Business Network in late September due to a Cubs-Brewers game still happening on Fox.

In tonight’s instance, we’re talking about a top-10 team in the country (No. 9 Washington) taking on another very good team in Stanford that has a Heisman Trophy candidate in running back Bryce Love.

Understandably, many folks on Twitter were quite upset that the first quarter of this game was missed on FS1 due to truck racing.

What an embarrassment for PAC 12—A premiere conference game like Washington/Stanford getting bumped from FS1 to FS2 for truck race!!! makes them look small time…

How dumb is the Pac12? Scheduling Stanford-Washington on a Friday and I'm stuck watching truck racing on that channel. Gross.

When does someone lose their job over this bullshit?#pac12istheworst

8:20 pacific, the start of the second quarter, and we finally see a play in Stanford-Washington on FS1. How does Larry Scott have a job?

Update on current @pac12 TV events: 1. FS1 will likely miss the start of UW football game due to the length of NASCAR truck race. 2. The UW basketball game is being shown in low definition. Low def. In 2017. You almost have to try to be this bad.

.@FS1 you completely ruined the viewing experience for the majority of Washington and Stanford fans today. Terrible. Just god awful. You should be ashamed of yourselves!!

FS1 claims it’s showing the Stanford-Washington game on my cable package, but it’s actually showing some bullshit NASCAR truck race. I’m not sure if Comcast, Fox Sports, or the PAC-12 and their crappy National TV deals are to blame for this, but it’s disappointing in the extreme.

Good grief, FS1 showing end of truck race and starting Washington/Stanford on FS2 until race is over. How bout making your 3 truck viewers search for FS2. Hard enough to find FS1!

FS1 going from a prolonged truck series trophy ceremony to a commercial break instead of Washington-Stanford is peak FS1.

A special place in hell exists for a network that makes me miss part of a Stanford Washington game to show trucks making left turns. #FS1

Truck racing has finally come to a conclusion, allowing FS1 to join Washington vs. Stanford in progress. Unreal.

Washington head coach Chris Petersen has made it clear that he hates these late-night games that are scheduled to accommodate TV networks, so he has to especially be angry that tonight’s game featured a delayed kickoff for TV reasons, and then FS1 still managed to miss the entire first quarter.