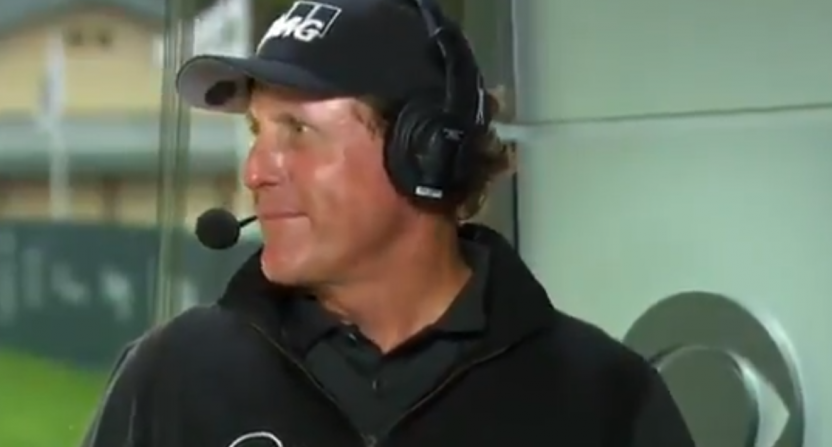 Last August during the PGA Championship, Phil Mickelson walked off the course and into the CBS booth for a cameo appearance as a guest analyst.

Things got off to a somewhat awkward start alongside Jim Nantz and Nick Faldo, when the latter didn’t quite get the opening joke Phil attempted:

Phil Mickelson dropping in for some analysis this afternoon; Nick Faldo wasn't quite ready for his opening dad joke pic.twitter.com/tNycbpWCeL

Beyond that, though, his performance went well. Mickelson is clearly comfortable talking on camera, as we learned from his appearances at various iterations of The Match. Mickelson still plays the PGA Tour and the majors, as he hasn’t transitioned full-time to the Champions Tour despite turning 50 last summer. (He’s made two Champions Tour starts and won both of them.) But he’s clearly battling time; after 26 years without falling out of the top 50 in the world rankings, Mickelson did indeed slip out in 2019. He’s now 89th, which is still incredibly impressive; last year, he popped up to finish 3rd at Pebble Beach and T2 at at the WGC event in Memphis.

That speaks to the current spot he’s in; on a good week he can still contend, but those weeks are growing fewer in frequency. And on his off weeks, he either isn’t able or motivated to grind out finishes anymore, which is understandable on both fronts.

This brings us back to broadcasting, where Mickelson’s familiarity with the current courses and players, along with his encyclopedic knowledge of the game, makes him a pretty appealing option for any network. Not to mention he remains one of the only non-Tiger figures in golf that has any sort of appeal to the “casual sports fans” networks always chase with golf coverage. He also really nailed that Harding Park cameo, which even at the time felt like a showcase tryout.

True. But this is night and day in terms of knowledge of the course (presumably would translate to majority of other courses they play) and the game of the current players. On top of at least being lively.

Yesterday at Front Office Sports, Michael McCarthy had a piece quoting Mickelson’s agent Steve Loy in which Loy noted his client would be ready to do broadcasting work within the next two years.

“It wouldn’t surprise me if in the next 12 to 24 months you might see more of Phil on the air.”

“He’d be the Tony Romo of golf. This is a no-brainer,” said one TV personality.

A source agreed: “Phil would be the great catch of all [potential] golf analysts. He’s the guy all the networks want.”

Mickelson remains a pitchman for multiple products and companies, including his own wellness brand. From that perspective, it makes sense why Phil might prefer the more pervasive exposure of television work to destroying the Champions Tour. (Plus, it might be a bit more dignified for him; his two appearances last year against the 50+ crowd ended up a bit like Kramer retiring to Del Boca Vista and dominating the ping pong scene.)

The only catch is where Mickelson would go. Fox is no longer in the golf business, and while ESPN is expanding their efforts there, so far that’s mostly relegated to the digital side. The new PGA Tour rights kick in next year, with CBS and NBC essentially carrying everything aside from a few days per year on ESPN at the Masters and PGA Championship. CBS also has a lead analyst in Nick Faldo, while NBC has their own in Paul Azinger.

Mickelson would presumably be more expensive than anyone currently working in the booth (until Nantz gets his next huge deal), and any network would have to be pretty convinced that Phil would boost ratings to make that kind of huge move. From a viewer’s perspective, though, Mickelson represents a clear upgrade; even if he devolves into shtick, it would still be more entertaining than the current shtick-centric offerings from the likes of Faldo.

Faldo should have his head on a swivel going forward, because if Phil wants that job… pic.twitter.com/fIHhWo2dZg

The timeline Phil’s agent mentioned is potentially illustrative, too. Obviously there’s not an opening now, but 12-24 months is a long time in television terms. (You could fit three entirely different ESPN Monday Night Football booths into that window, for example.)

Getting the word out now that Phil is interested and on that timeline allows networks to evaluate their options and maybe plan for a potential change, while Mickelson presumably hawks his wellness coffee, wins a few more senior events, and plays some bigger PGA Tour stops and the majors for which he’s eligible. We’re probably not going to see a change anytime soon, but Phil in the booth in some capacity feels inevitable. It just makes too much sense for everyone.