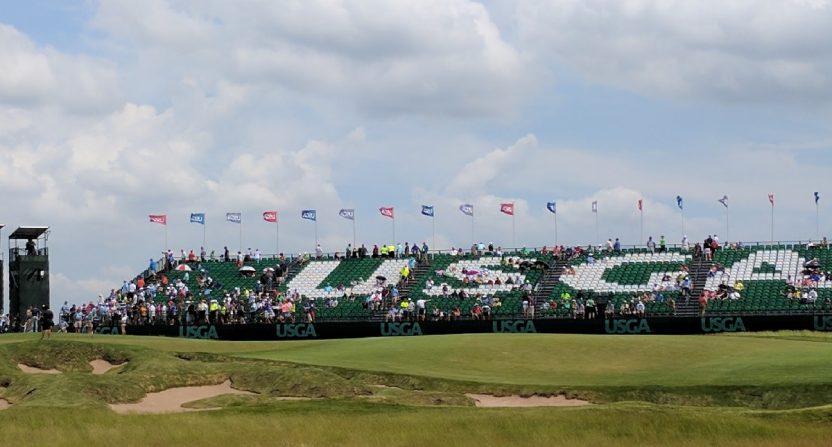 The Covid-19 pandemic will certainly lead to a variety of broadcasting conflicts as leagues and schedules get pushed back. We’ve already seen one surprising abdication, with Turner giving up their UEFA Champions League package midstream.

We now have another example, with Fox reportedly asking out of the remainder of their deal with the USGA, with NBC set to air the rescheduled U.S. Open in September. That’s according to Associated Press golf writer Doug Ferguson:

The U.S. Open is returning to NBC starting this year at Winged Foot after Fox Sports has asked to end its 12-year contract with the USGA, multiple people told The Associated Press on Sunday night.

Three people with direct knowledge of the change say it came together in the last two weeks. They spoke on condition of anonymity because the deal has not been announced.

An announcement was expected Monday.

Ferguson also reports that NBC is taking over the entirety of the Fox deal, which is a fascinating wrinkle:

One person said Comcast-owned NBC would pick up the final seven years of the contract through 2026.

The change means NBC will have the U.S. Open and the British Open, along with three World Golf Championships, the Ryder Cup, the Presidents Cup and the FedEx Cup playoffs every other year.

Those rights would seem to have a lot of value to networks that don’t have potential NFL conflicts. And, assuming a sports calendar can get back to something resembling historical normalcy at some point, it kind of looks like Fox is giving up on golf mostly to avoid having a football conflict this fall, assuming professional and college football happens. It’s maybe not a huge surprise, though; going back to 2017 there were rumblings that the USGA and Fox weren’t seeing eye to eye.

It’s unfortunate in some ways for golf viewers; when Fox was awarded the rights in 2013 they promised to push innovation, and though their first men’s U.S. Open was infamously rocky, they had really hit their stride the last few years. And their influence on other networks is undeniable; their commitment to shot tracer technology alone forced NBC and CBS to catch up on that front, and they were also at the forefront of adding microphones, highlighting architectural points, and bringing men’s and women’s amateur golf to a wider audience.

It’s also obviously unfortunate for Fox’s remaining golf crew; Joe Buck will certainly be fine, and Paul Azinger already had a split deal with NBC, so he’ll presumably just slot in, but someone better give Shane Bacon (to pick just one name) a golf gig if he wants it. And that’s just on-camera; the Fox production team is full of talented people as well, and their vision for golf broadcasting is something that any of the other networks would be wise to try and incorporate.

The winner here is NBC; in addition to the men’s U.S. Open, Fox had the rights to the women’s U.S. Open and the aforementioned amateur championships, all of which are the kind of inventory that Golf Channel can desperately use. NBC/Golf Channel, CBS, and ESPN are now the only networks in the golf business, and NBC’s inventory is certainly quite impressive. The USGA has a new (but very familiar) home, and Fox’s brief foray into major championship golf is over for the foreseeable future.

That it’s lamentable is a testament to how far they came from 2015, and it’s a shame that we won’t get to see where they were going to go next.