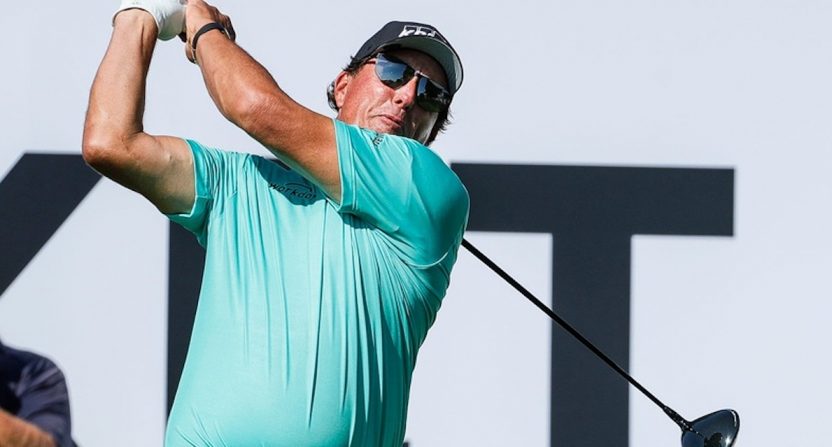 Phil Mickelson is in Detroit during the July 4 weekend to compete in the Rocket Mortgage Classic. But after the Detroit News published a report that Mickelson’s lawyer said was intended to “embarrass” his client, this year’s PGA Championship winner says he won’t return to play in the event again.

The story by News reporter Robert Snell was posted late Tuesday and highlighted gambling allegations from a federal trial transcript that linked mob-connected bookie Don DeSeranno to Mickelson. However, Mickelson was not accused of committing any crime or doing anything wrong, nor was he a subject of the federal investigation.

According to Mickelson’s lawyer, Glenn Cohen, no wrongdoing by his client, the bets in question being made more than 20 years ago, and the trial taking place in 2007 made the golfer’s inclusion in the report unnecessary. In his view, mentioning Mickelson was an attempt to connect him to someone with Detroit ties days before he plays in a local golf tournament.

Mickelson called the report an “unnecessary attack” that showed a “lack of appreciation” for playing in an event that was difficult for him to arrange.

.@PhilMickelson said he won't return for Detroit's Rocket Mortgage Classic. He loves the fans and what Rocket is doing in the city, but…

Mickelson said this week's Detroit News article about a 2007 incident with a Grosse Pointe bookie was "very opportunistic and selfish." pic.twitter.com/GcZ5OOONeU

“I don’t see me coming back,” Mickelson told reporters (including the Detroit News‘ Matt Charboneau. “Not that I don’t love the people here and they have been great, but not with that type of thing happening.”

DeSeranno, who died earlier this year, was a Las Vegas casino host who handled bets for high-rolling gamblers from 1994 to 2002. Considered an associate of national mafia organization La Cosa Nostra by the government, he was called as a witness to testify against Detroit crime boss Jack Giacalone during a 2007 racketeering trial.

Attempting to call DeSeranno’s credibility into question, Giacalone’s lawyer mentioned Mickelson and how the bookie cheated him out of significant money.

From the Detroit News:

“Did you cheat — do you know Phil Mickelson, the golfer?” Giacalone’s lawyer, Neil Fink, asked.

“I wouldn’t say I cheated him,” DeSeranno said.

“I couldn’t pay him,” DeSeranno said.

According to Snell, neither the federal prosecutor nor DeSeranno’s lawyer knew of the bookie’s involvement with Mickelson. And when contacted about the News report, Mickelson’s lawyer said the golfer knew nothing about DeSeranno’s background when placing bets with him.

Thank you for your support. I don’t understand people like Rob Snell who’s opportunistic and selfish actions prevent people from wanting to come to Detroit and help in any way they can.

Should Mickelson take out his anger at the News report on the Detroit area and organizers of the Rocket Mortgage Classic? Certainly, it’s his prerogative to do so. And whether or not Mickelson had to be mentioned in the report is arguable. Maybe it was a stretch. But local fans and readers might be interested to know that Mickelson was cheated out of a notable amount of money by a bookie with Detroit ties.

And is it Snell’s job to “show appreciation” and help promote a local event? Or is it his job to report something that was newsworthy. Even Mickelson’s lawyer said nothing in the story was inaccurate. It’s up to event organizers, local fans, and community promoters to show Mickelson gratitude for making an effort to appear in Detroit and bring a lot more attention to a tournament that might not get such publicity otherwise.

Media detractors will say Snell’s report was a “gotcha” story. But the federal court transcript was discovered earlier in June. The report couldn’t have been published earlier. Others might believe that Mickelson is being far too sensitive and penalizing the wrong people. Neither side looks good in that light, unfortunately.