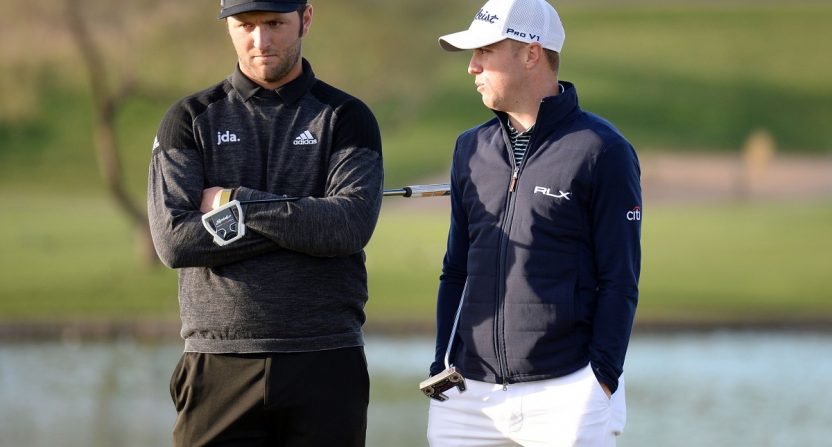 A few weeks ago, Justin Thomas turned in a masterful performance on the golf course. That in itself is nothing new, he’s ranked #4 in the world, after all. But the plaudits this time came for his work as an on-course reporter during The Match.

That broadcast featured all four competitors wearing microphones and earpieces, while Thomas asked Phil Mickelson and Tiger Woods insightful questions and then mostly got out of the way of the answer. (He also called Charles Barkley a fat ass.) It was the work of someone who clearly gets what golf broadcasts need more of: entertaining while understanding what on-course thoughts and insights viewers would want to hear as they happened.

Which makes it even more disappointing that ahead of the PGA Tour’s return this week at Colonial, Thomas was adamant that he has zero interest in wearing a microphone during a tournament round as a player. That comes as CBS (and presumably NBC as well) are working with the Tour to get players to wear microphones as a way to enhance the broadcast, especially considering the challenges networks will face broadcasting amidst a pandemic.

Here’s what Thomas said, thanks to Golfweek’s Tim Schmitt:

“I would not wear a mic, no. That’s not me,” Thomas said. “What I talk about with (caddie) Jimmy (Johnson) and what I talk about with the guys in my group is none of anybody else’s business, no offense. I mean, as close as those mics are on the tees and the greens and as close as I get to boom mics during competition anyway, I basically feel like I am mic’d up.”

…Thomas agreed that there’s a time and a place for discussion, and while many have already insisted he’d make a great TV commentator when his career is over, he said he’d prefer to offer his thoughts in a more controlled setting.

“I can’t say some stuff that I usually say anyway, and it is not that it’s bad, but no, if I want somebody to know what I say, I’ll say it in a press conference, I’ll say it in an interview or put it out on social media, whatever it is,” Thomas said. “But I personally am not one that would care to get mic’d out there.”

Justin Thomas, it should be clear, plays a spectator sport for a living. And in a world without fans in attendance (a world that might become the new normal, for the foreseeable future), any way to remove more of a filter between the at-home audience and the action is a good idea. It also rings hollow considering the nature of the game itself; there are no signs or plays for competitors to steal, nor is there much of a strategy that other competitors could find useful for themselves.

There’s also the fact that other sports already do this! Not necessarily with a live microphone that broadcasts can throw to throughout coverage, but NBA, NFL, and MLB players routinely wear microphones that networks use for quick replay looks or for edited packages, even as the game progresses. Just as a random example, David Ross was mic’d up during Game 7 of the 2016 World Series and still managed to perform just fine, but Justin Thomas thinks that Saturday at the Charles Schwab Challenge is a stage too important for that kind of distraction.

Thomas isn’t the only player speaking out, though. World #2 Jon Rahm also said he doesn’t really see the point, though he did at least say it was something players could maybe get used to if it goes well:

“I don’t think there’s any reason why we should be mic’d up from shot to shot. really. But again, it all depends. If somebody decides to do it and it really works out and they think it’s really fun, cool, go ahead. I can tell you I’m not speaking about many interesting things on the golf course. There’s just a lot of golf, if I speak at all,” Rahm said.

That quote from Rahm (seen above at left with Thomas) of “There’s just a lot of golf” is incredibly revealing. Players might be looking at microphones as an instruction to entertain, or put on some kind of act, when that’s not what anyone really wants. For something like The Match, sure, but that’s because watching the personalities interact was the draw, not the competition itself. For the PGA Tour, people are tuning in to watch golf. It’s understandable that some players might have a disconnect there, because the PGA Tour doesn’t seem to get that either.

Golf. Is. Back.
WATCH: Newt Gingrich, the guy from the Alabama Leprechaun video, Johnny Manziel and more welcome players back on the tee.
????????‍♂️ pic.twitter.com/5IQ3L4p8LI

There’s one thing that makes the Tour unique from other pro leagues: there isn’t a push and pull between owners and players, because the players essentially run the Tour. That’s certainly better than a league where owners have all the power, but it does mean there’s no mechanism to implement some things that might make players somewhat uncomfortable (if only for a short time until they get used to it) but that would be in the best long-term interests for the sport.

And there might not be anything more necessary for golf’s long-term interests than an overhaul of the broadcasts. The weekly product is generally panned by diehard golf fans for good reason, and none of the efforts to widen the appeal to casual sports fans have worked on that front (while also further angering the core audience.) Getting players to wear microphones isn’t going to solve all of those issues, but it’s an obvious step to take, and one that some players see the wisdom in doing; without fan interest, the entire business model for the PGA Tour falls apart quickly.

So, what’s the solution? It isn’t easy! Athletes in general are reticent to change, and professional golfers make athletes in general look like revolutionaries. But there are a few ways networks could lean in a bit.

Focusing on current top players who are willing to do it is the easiest one, and that’s what they’re going to start with.

But while so far a lot of the focus has understandably been on whether the big names are going to do it, focusing on the other end of the spectrum would seem to make even more sense. Picking out a group of promising younger players and offering them the chance to be mic’d would allow them more exposure; networks have generally not done a great job of highlighting the full fields, and that’s deprived viewers from getting to know rising stars.

It’s maybe not as simple as that, but it’s not that hard, either. And younger players have plenty of incentive, too; more television time means their shirt, hat, and bag sponsorships become even more valuable properties. And if a few of the players that partake end up becoming stars, then you have big names who are used to wearing microphones from the start, which makes it a lot easier going forward. Considering how quickly young players are winning and contending on Tour these days, it might not take long for a return on that investment, either.

There’s also the featured group streaming coverage on Thursday and Friday, which is currently part of NBC Sports Gold before moving to ESPN+ as part of the new rights deal. The only real appeal for opening round coverage is to be able to follow players for the entirety of their rounds; it’s a product aimed squarely at diehard golf viewers. Adding in the ability to listen in live would make it even more appealing to the core audience, and it might actually be able to draw in some wider viewers for a trial run or a month’s subscription; who wouldn’t want to listen to Tiger as he played a round on a Thursday morning?

For a long time the networks themselves have borne the brunt of criticism, and oftentimes for good reason. But now that there’s at least a slight willingness to modernize, it’s on the players to recognize that a quality broadcast product is key to their own incomes, but a lot of big names don’t seem to grasp the nature of that relationship, or do but don’t think it’s worth making small changes to their own routines for the greater good.