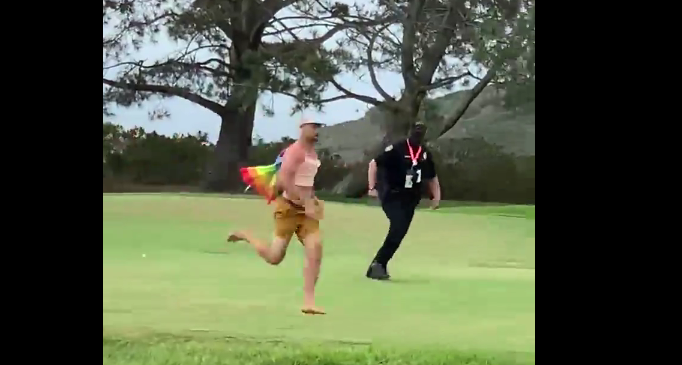 We’ve seen a lot of fans try to run (or even paraglide) onto professional sports playing surfaces over the years, but what happened Sunday at the 2021 U.S. Open at Torrey Pines still stood out. A fan, clad only in a short top, shorts, and a Pride flag, ran onto the fairway in front of Bryson DeChambeau, and did so carrying a club and two balls (and no, that’s not an innuendo). The fan then dropped the two balls, hit one off to the side of the course, danced around with their club (also not an innuendo), hit another ball with security closing in, then took off running and was apprehended by a security guard on a golf cart:

Here’s another angle from former player and current Sky Sports analyst Rich Beem, who initially posted this video to his Instagram, but then deleted that. But Golf.com’s Sean Zak picked it up:

Via @beemerpga on Instagram, the best streaker golf has really ever seen. Clubs in hand, hit a few shots! pic.twitter.com/TVyL7IycCD

That’s quite the course invasion, especially during the late stages of a major tournament. At least this invader was wearing some clothes, however, unlike some we’ve seen in the past. But on the downside, Kevin Harlan wasn’t there to call this one.