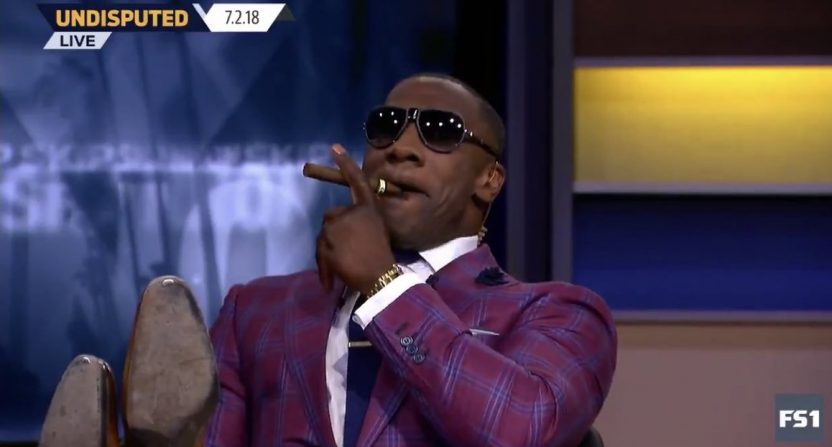 Front Office Sports‘ Michael McCarthy reports that Sharpe signed a multi-year deal to remain at Fox Sports and continue debating Skip Bayless weekday mornings on FS1’s Undisputed. Sharpe has been Bayless’ opponent on FS1 since 2016, after many years as a studio analyst for CBS on The NFL Today. Oh, and he’s a Pro Football Hall of Famer after an NFL career that included three Super Bowl titles and eight Pro Bowl selections.

Sharpe has been an ideal match for Bayless in the hot-takey debate format, and he’s proving to be a versatile talent (and also very GIF-able). For example, Fox had Sharpe on as a co-host on the red carpet during last Sunday’s Emmys.

According to McCarthy, FS1’s Cris Carter —  another former NFL star who debates on First Things First — was in consideration to replace Sharpe if a new deal couldn’t be reached, but Fox didn’t want to let Sharpe get away.

The Pro Football Hall of Famer’s initial three-year deal expired in July. There was speculation FS1 might install Cris Carter of FS1’s First Things First opposite Bayless if they couldn’t come to an agreement with the three-time Super Bowl champion.

Additionally, Fox Sports has signed longtime MLB insider and reporter Tom Verducci (also known for his writing for Sports Illustrated) to a multi-year extension, according to The Athletic’s Richard Deitsch.

Tom Verducci has re-signed a multi-year deal with Fox Sports. The new deal includes MLB of course but also something new: He'll do college football features for Big Noon Kickoff and other CFB programming.

Verducci is one of the most respected baseball reporters in the business and should do fine on the college football side of things. It will be interesting to see if this leads to sideline reporting or any other college football roles for Verducci with Fox in the future.