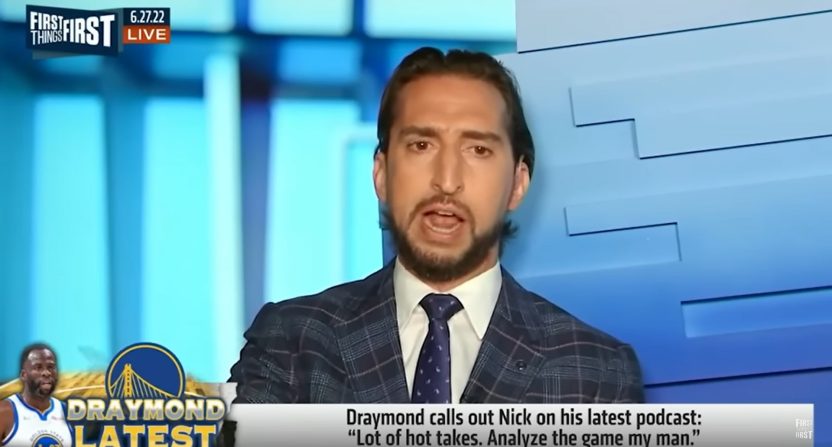 In Green’s first podcast episode of the offseason, he went back to his well of bashing traditional media members, calling out Fox Sports’ Skip Bayless and Nick Wright, and degrading Kendrick Perkins with a racial slur.

“Nicholas Wright, how you doing? Lotta hot takes. You admitted the other day, ‘We make hot takes!’ ANALYZE THE GAME, MY MAN!” Green ranted, later blasting Wright for not owning up to his past criticisms of Andrew Wiggins.

The problem, however, is that while Wright is a notorious hot taker, he didn’t say “We make hot takes” on his FS1 show First Things First. And while Wright did notoriously blast Wiggins a couple of years ago, he already admitted he was wrong more than a month ago, confessing that it was his “most regrettable television take.”

After hearing Green criticize him on his friend Colin Cowherd’s podcast network, The Volume, Wright offered a strong response to the Golden State Warriors forward for misquoting him.

“If he is fairly, and it’s totally inbounds, going to criticize folks in the media for how they cover the game, then he then becomes subject to the criticism for how he not only plays, but how he does media,” Wright said on First Things First. “And in media, new or old, it is important to not misquote people. I didn’t say we’re out here making hot takes, what I said was, we’re out here giving predictions.”

“Draymond has the ability to be a very interesting media personality,” Wright added. “But he also is going to have to understand that petty beefs and playing tricks with peoples’ names…is only going to take you so far.”

Green does have the ability to be an interesting media personality because he is willing to be brash and unfiltered when behind a mic. The problem, however, is that he’s more focused on starting media feuds than he is offering unfiltered analysis about his NBA peers. And now that the NBA season is over, Green has less to talk about on his podcast, meaning he’s more than likely going to keep heading back to that same well of bashing the “old media.”

But how long before continuously ripping Skip Bayless, Stephen A. Smith, Nick Wright and Kendrick Perkins similarly becomes “old, dried up, tired stuff” that people don’t want to hear anymore? If we haven’t reached that point yet, we definitely will before the NBA preseason tips off in September.

“You know what he’s learning about right now?” Wright said of Green. “June, July, August, the old slow time. ‘Wait, there’s no games, wait there’s not a lot of news. Oh god, I gotta go create some content!’ And he’s already in reruns.”