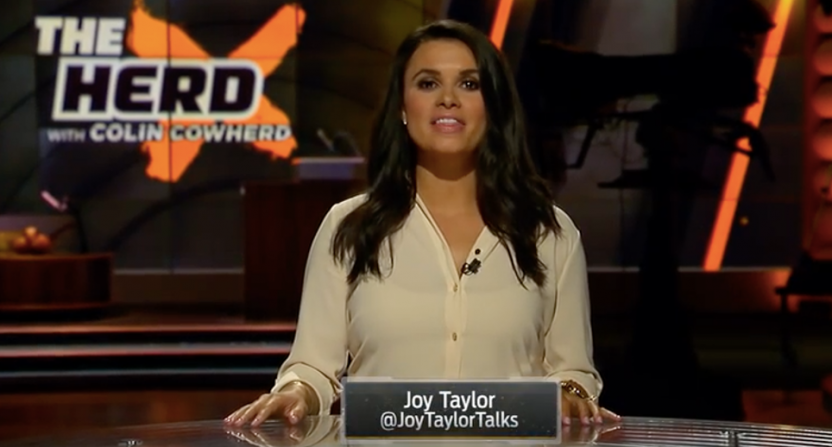 It looks like Fox is preparing to fill the role Kristine Leahy left in April as The Herd‘s update anchor, and it may be a familiar face stepping in. Michael McCarthy of The Sporting News writes that Undisputed moderator Joy Taylor “is poised to succeed Leahy as Cowherd’s news desk/update anchor partner” on the FS1 show. Taylor guest-hosted that show on Friday. If she does make the jump, McCarthy adds that candidates to follow her on Undisputed include Jenny Taft and Holly Sonders:

If and when Taylor leaves “The Herd,” two possible candidates to succeed her on “Undisputed” are Jenny Taft and Holly Sonders, sources said. Fox Sports declined to comment Monday.

Taft has served as a fill-in host on both “Undisputed” and “The Herd.” This summer, she’ll contribute to Fox Sports’ coverage of the 2017 FIFA World Cup Russia. The former college lacrosse player has also worked as a sideline reporter for the network’s college football and soccer coverage, and as field reporter at the Westminster Kennel Club Dog Show.

Sonders made her name on The Golf Channel before joining Fox Sports. She’s currently one of the announcers on Fox’s USGA golf coverage. She also serves as a sideline reporter for NFL on Fox game telecasts.

Yes, that should be the 2018 World Cup, but who’s counting? McCarthy adds that the role on The Herd is seen as a promotion, which is interesting. Yes, it occasionally allows for interjections of opinion and so on, as Leahy showed during her time there, but there’s a whole lot of the show where the update anchor hasn’t been seen or heard relative to Undisputed. But being the moderator on a debate show isn’t always the most fulfilling job either, and it’s been a pathway to bigger things for some who have held that role (like ESPN’s Cari Champion).

If being the update anchor on The Herd is actually a step up, more power to Taylor there. It certainly worked out well for Leahy, who will be hosting her own half-hour FS1 show this fall. And maybe Taft or Sonders can parlay Undisputed moderator into something better with time as well. We certainly don’t wish for anyone to have to listen to Skip Bayless every morning.

And maybe this will be incentive for Fox to actually make the update anchor a more important part of The Herd. A lot of the criticism in the wake of the Leahy/LaVar Ball incident was deservedly about how The Herd‘s setup (guest in middle facing Cowherd’s desk, update anchor at desk behind guest) marginalized Leahy in any conversations with the guest. Taylor has proven to be a smart and insightful sports personality, and she could bring an interesting perspective to some interviews if called upon; if the show can find a way to put her in a better position and feature her more, that might be an improvement for it.

Cowherd himself may be focusing more on The Herd if reports that he’s planning to leave Speak For Yourself by the end of the year are accurate, and maybe that will lead to a reworking of that show. We’ll see how this all plays out; it’s all pretty tentative at this moment. But Taylor could be an interesting addition to The Herd, and it would be interesting to see how Taft or Sonders handle the Undisputed moderator role. We’ll see how it goes.