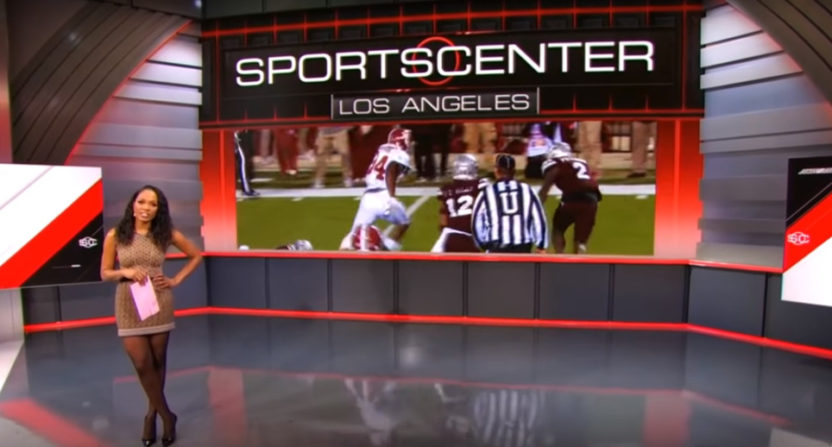 Cari Champion’s profile continues to grow at ESPN. Champion signed a multi-year deal with the company back in October 2016 and earned significant buzz as a possible replacement for Michelle Beadle on SportsNation last November, and now that’s become official.

Beadle is heading to forthcoming morning show Get Up and moving across the country as part of NBA Countdown‘s shift, and her last day on the show was Feb. 9, complete with an emotional goodbye. Following that, the show has been hosted just by Marcellus Wiley and LZ Granderson.

Now, ESPN has announced that Champion will be added to the SportsNation mix beginning March 12:

…“SportsNation is a brand the company cares for deeply, and I’m excited to join a well-regarded show and also show another side of me,” said Champion. “As the only woman on the show, I’ve already let the guys know I’m going to bring the heat. This is an exciting time and I’m looking forward to the support from all involved! Teamwork makes the…you get the point.  Cheers!”

Added Richelle Markazene, SportsNation coordinating producer: “Michelle Beadle has been the significant driving force in SportsNation’s popularity and success and it is very difficult to say goodbye to her, but Cari Champion is one of the most talented personalities at ESPN and we are thrilled to have her on the SportsNation team. Cari will bring a new approach and energy to the show and we are excited to begin this new era of SportsNation with her.”

Champion went to UCLA and wrote for the school newspaper, The Daily Bruin, before interning at CNN, working at several local TV stations and then working for The Tennis Channel and Starz. She joined ESPN in 2012 as the host of First Take, started doing E:60 pieces in November 2014, and became a SportsCenter anchor in June 2015. She’s been featured on many different SportsCenter editions, including the Coast To Coast broadcasts with David Lloyd, but SportsNation seems like a further step up for her, and a further chance for her to express her sports opinions.

This move is notable for SportsNation continuing its line of female co-hosts. The program started in 2009 with Beadle and Colin Cowherd, with Charissa Thompson replacing Beadle when she left for NBC in the summer of 2012. Wiley replaced Cowherd in December 2012, with Thompson exiting in 2013 to move to Fox and Max Kellerman coming in. Beadle returned in 2014 to join Wiley and Kellerman before Kellerman left for First Take in July 2016. Granderson has been a contributor to SportsNation and other ESPN studio shows for a while, and took more of a regular SN role following Kellerman’s departure.

But the program has almost always had a prominent female co-host, and Champion will continue that. We’ll see how she does in the new role.