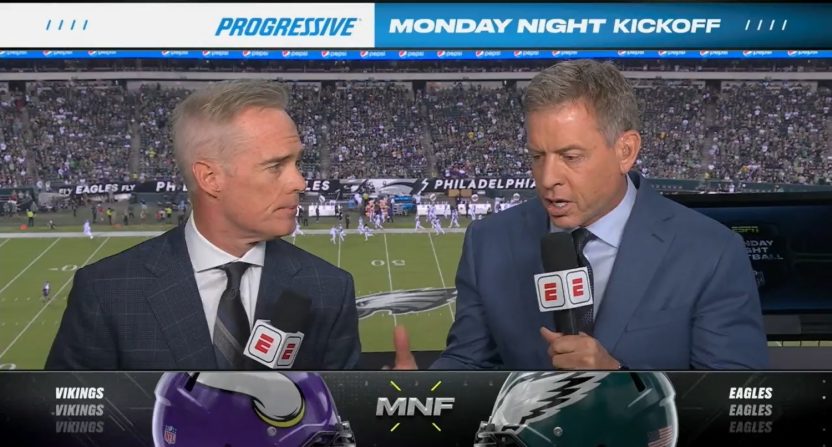 There are one-sided trades and there are win-win trades, and according to Joe Buck, moving to Monday Night Football with Troy Aikman was a win for both ESPN and Fox.

Buck spoke to Richard Deitsch of The Athletic as he prepares to call a whopper of a matchup between the Buffalo Bills and Cincinnati Bengals on Monday Night Football next week. And during their conversation, Buck briefly reflected on his first season in the Monday Night Football booth after he and Aikman shook the broadcast industry by leaving Fox for ESPN.

So according to Buck, going to ESPN with Aikman is more Eli Manning for Philip Rivers than it is Russell Wilson for a boat load of draft picks.

What did Fox get from ESPN in return Buck and Aikman? One Big Ten football game. Not exactly a Philip Rivers-type haul, although Fox didn’t exactly fight hard to keep Buck and Aikman on their team. Fox did save money by not paying the renowned broadcast duo this season, but that savings will be thwarted when and if Tom Brady accepts his $375 million contract to be their lead NFL analyst.

As of right now, Brady’s future with Fox continues to be a big if despite his propensity to speak like it’s a sure thing. But as Brady’s presence looms, Kevin Burkhardt and Greg Olsen continue to fill the void left by Buck and Aikman.

“I’m proud of them,” Buck told Deitsch of Burkhardt and Olsen. “I don’t know Greg hardly at all. I only know him from covering him. But I’m proud of Kevin, and I’m proud of my former group. We’re all still really great friends, and we text all the time.”

Burkhardt and Olsen are fine in place of Buck and Aikman, but it will take time before their voices sound like a big game. In losing Buck and Aikman, Fox lost their voice of the MLB World Series and their lead NFL team during a Super Bowl year. From the outside looking, that hardly seems like a win for Fox.