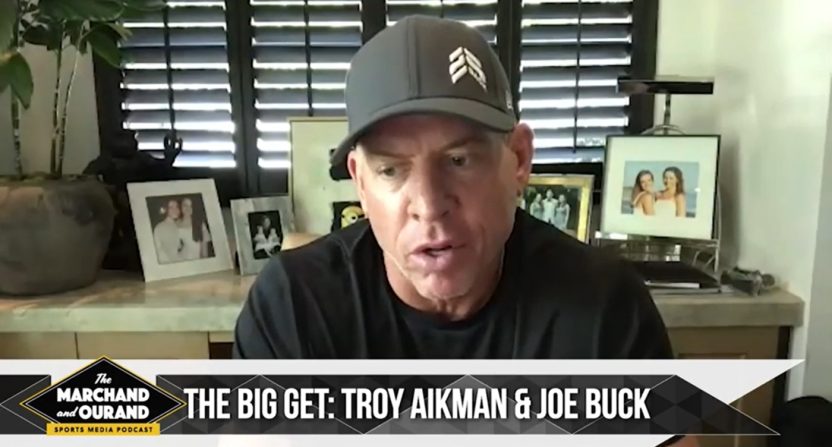 The NFL season is about to kick off, which means ESPN will soon debut the league’s highest-profile free agency acquisitions of the offseason: Troy Aikman and Joe Buck.

Aikman and Buck joined Andrew Marchand and John Ourand on their sports media podcast this week, and they discussed their surprising offseason move from Fox to ESPN’s Monday Night Football booth. While Aikman speaks glowingly about ESPN, the former Dallas Cowboys quarterback has some disappointment in the way his 21-year tenure with Fox came to a close.

“The reason that I’m no longer at Fox is mostly due to a lack of communication,” Aikman said on The Marchand and Ourand Sports Media Podcast. “Which is ironic since we’re in the communications business. But, that’s the way that it is.”

After Aikman continued his answer with a more than two-minute glowing soliloquy explaining how much he appreciates working with Buck again, credit Marchand for bringing the conversation back to Fox with a follow-up question, asking what the Hall-of-Fame quarterback meant by “lack of communication.”

“I never had a conversation with Eric Shanks until he called to congratulate me on the ESPN contract,” Aikman said of Fox Sports’ CEO and executive producer. “I asked him specifically for some comments that I had heard that circulated and got back to me and he refused to answer those questions. Joe had asked him the same questions as to ‘How did we get here?’ And he refused to answer those questions as well.”

Since making the move to ESPN, Buck has portrayed his exit from Fox very differently than Aikman’s, claiming the network did not want to lose him as their premier play-by-play voice, especially in a Super Bowl year. Buck, however, was still under contract with Fox, so the communication needed to negotiate his exit was different than the communication Aikman was expecting as a free agent.

“I used the word disappointing,” Aikman continued. “I think that’s the biggest thing for me. I just think that it’s not hard just to have a conversation and if you have a position, that’s fine. Nobody has to feel at fault for feeling a certain way or taking a stand. Just communicate that. And I think that’s the biggest disappointment that I took from it. But with all that being said, I couldn’t be more excited to be at ESPN and see how someone else does it. And what I’ve seen is, they do it a lot differently, and it’s been refreshing.”

After watching their lead NFL booth depart for massive contracts with ESPN, Fox made a splash of their own, signing Tom Brady to a $375 million contract which will begin when the quarterback retires from the football field. Brady is expected to partner with play-by-play voice Kevin Burkhardt to fill the void created by letting Aikman and Buck go to ESPN. But in the interim, the lead analyst chair for Fox will be filled by Greg Olsen as the network awaits Brady’s retirement.