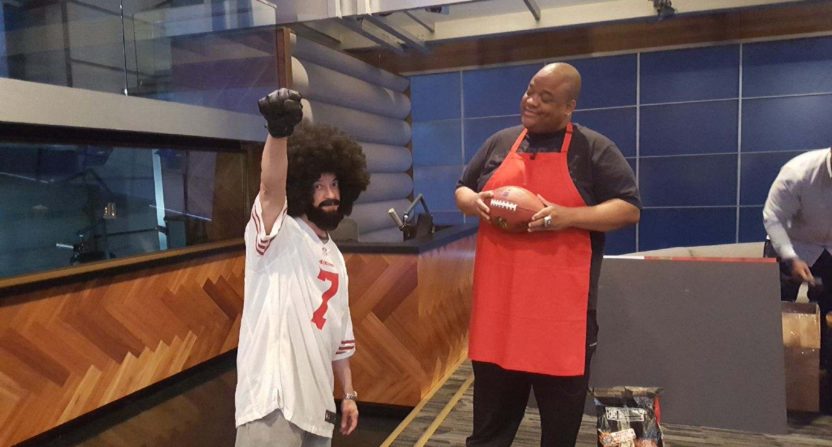 Apparently, FS1 has some standards for its programming, and Jason Whitlock’s latest Colin Kaepernick sketch didn’t meet them. Whitlock created massive blowback on Twitter Tuesday by posting a photo of him standing around in an apron with someone dressed as Kaepernick holding up a black-fisted glove. TMZ later revealed that the Kaepernick impersonator was Christopher Reid, or Kid from Kid N’ Play. The sketch didn’t show up on Speak For Yourself Tuesday or Wednesday, though, and Deadspin’s Tom Ley reported Thursday that it was never fully filmed, and was axed by SFY producers:

Fortunately for those who were offended by Whitlock’s tweet, the skit in question will never see the light of day. A source familiar with the situation tells us that the producers of Whitlock’s show made a collective decision to spike the segment because it didn’t meet their standards. The source added that Whitlock and Reid had only finished filming part of the skit, and that it had never been officially greenlit in the first place.

Great to have Kap stop by the studio today. pic.twitter.com/2UPuyCdWdK

When Lavar Ball said Jason Whitlock couldnt talk to him about nothin but snacks. ? @WhitlockJason pic.twitter.com/mTmlG34gWo

Yep, Willis is a current coworker of Whitlock’s, so things are going just great there. Another coworker, Shannon Sharpe, was even angrier, and, in conversation with Black Sports Online’s Robert Littal, said he’d address it with the head of Fox Sports (presumably president Eric Shanks):

@ShannonSharpe fam you gotta speak on the blackface @Kaepernick7 being acceptable on your channel.

I will talk to my producer but it might be something the want to handle internally and discuss publicly. https://t.co/s2iG5zYalD

I reached out to the head of PR, yet to hire back as of yet, don't want a fake apology, just want to know who give it the OK https://t.co/Ld4V2j7Ngj

I'm going to address it with head of Fox sports/FS1 . This is UNACCEPTABLE https://t.co/YNzHmSoD5l

I remember the good-old days when people sought real information before feigning outrage in a publication or publicly. #FakeNews

He went radio silent for a while after fighting with others, and then had another response Thursday afternoon:

The fact that Kid from Kid n Play would impersonate him is disgusting ? https://t.co/fqj9viPqHP

Is there an official list of people who can't be impersonated? Is this on wikipedia? https://t.co/N0L83nUQ1U

The most interesting part of this, though, may be the comments from Ley’s source that this sketch didn’t meet FS1’s standards. That means they aren’t just letting Whitlock do whatever he wants on the air, an impression you might mistakenly have from seeing some of his other “sketches”:

A warning from @WhitlockJason about the consequences of playing professional football. pic.twitter.com/TaesjxNjbz

.@WhitlockJason: It will take a therapist — not Spike Lee, Jordan Peele or Twitter — to rescue Kaepernick from his sunken place. Get Out! pic.twitter.com/B4A3nRzhu8

Whitlock has also called Kaepernick “Martin Luther Cornrow,” suggested that Kaepernick isn’t black enough to protest (in the Wall Street Journal, no less, part of Whitlock’s expanded presence there and on other Rupert Murdoch-owned media outlets like Fox News as a FS1 ambassador to conservative readers and viewers), dropped so many ridiculous takes on air that we had to retire him from our weekly hot takes roundup, and still, almost a year later, has as his pinned tweet one of the stupidest and least logical word-salad conspiracy segments ever aired on television:

This week, though, it was apparently Whitlock who lost the culture war. But he found a way to create something that even FS1 wouldn’t air, and that’s a remarkable accomplishment.