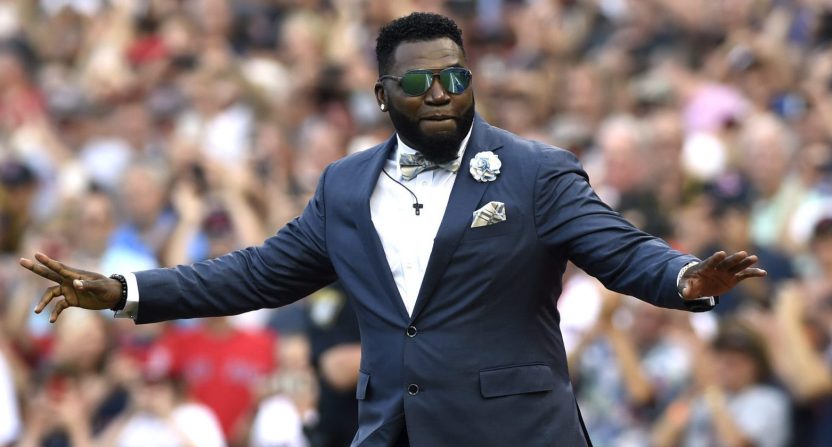 The lineup of Fox Sports documentaries around their MLB coverage continues to grow. They previously announced Searching for Shohei: An Interview Special, a special done in partnership with Religion of Sports and hosted by Fox’s Ben Verlander, which will premiere on FS1 on Oct. 18. On Monday, they announced another one that will premiere on FS1 on Oct. 14: David Ortiz: Legend of the Fall. Here’s the trailer they put out:

Here’s more from a release:

DAVID ORTIZ: LEGEND OF THE FALL premieres Friday, Oct. 14 on FS1 following the network’s live MLB Postseason coverage and invites audiences to follow alongside the 10-time All-Star and three-time World Series champion as he embarks on an epic journey into and beyond the National Baseball Hall of Fame. Big Papi, as he’s affectionately known, reflects on his astounding baseball career and the pivotal moments that launched him to legendary status.

“David Ortiz is one of the most beloved personalities both on and off the field and FOX Sports is thrilled to shine a spotlight on one of our very own during this historic and iconic moment in his career,” said Barry Nugent, Vice President, Development and Original Programming, FOX Sports. “He continues to bring a lot of joy to baseball fans far and wide, and we are delighted to give those fans a front row seat to Big Papi’s baseball journey to his coronation at the Hall of Fame.”

“This film sends the message to my fans that if you have faith and don’t quit, you can achieve your dreams,” said Ortiz. “I was very fortunate to achieve mine and I am humbled by my entry into the Baseball Hall of Fame. I am honored that FOX Sports, Check Point Productions and my very own Big Papi Productions captured my baseball career and special moments at the plate – giving me the gift of being able to relive these precious times in my life. I am equally proud of my accomplishments off the field and being able to share them with my family and community. I hope my fans will enjoy the film as much as I have.”

We’ll see how this one turns out and how it’s received. It certainly adds to a notable career for Ortiz (seen above in 2017), who shone as a player with the Minnesota Twins (1997-2002) and Boston Red Sox (2003-2016) before pivoting into a studio career with Fox, and was inducted into the Baseball Hall of Fame earlier this year (in his first year of eligibility). And hopefully it will be better than 1994 movie Legends of the Fall. Or, at the very least, involve less gratuitous footage of World War I deaths.