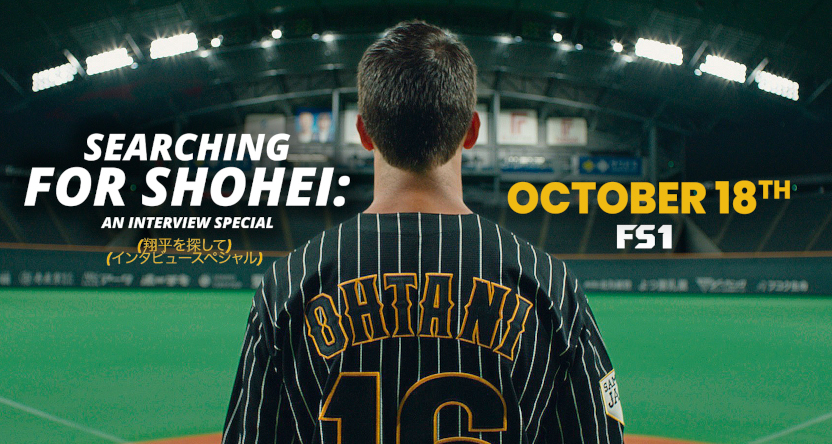 On October 18, FS1 will premiere Searching for Shohei: An Interview Special. The 60-minute special feature is produced for Fox Sports Films by Religion of Sports, and it will see Fox Sports’ Ben Verlander sit down with Los Angeles Angels star Shohei Ohtani for “an exclusive all-access interview and in-depth conversation about Ohtani’s unique path to superstardom.” A teaser trailer for it has Verlander talking about how special he believes Ohtani is:

Here's a teaser trailer for "Searching For Shohei: An Interview Special," which Religion of Sports is producing for Fox Sports Films. Hosted by Ben Verlander, it will premiere on FS1 on Oct. 18. pic.twitter.com/ZgvVxlYjZD

And here’s more on the project from a release:

“FOX Sports Films is excited to showcase Shohei Ohtani’s incredible story and authentically celebrate the impact he’s making on the game of baseball around the world,” said Barry Nugent, Vice President, Development and Original Programming, FOX Sports. “This project is special because it’s the result of a great relationship that’s been built over the years between Ben and Shohei culminating in this one-of-a-kind interview.”

“Red Sox fan first. Shohei fan forever,” said Gotham Chopra, Religion of Sports’ co-founder. “This is not just a baseball player. This is an icon. Working with Shohei and Ben is everything Religion of Sports is about and we couldn’t be more thrilled to be collaborating with him on this special project.”

Chronicling Ohtani’s upbringing in Japan and continuing through present day as Major League Baseball’s reigning American League MVP, SEARCHING FOR SHOHEI intimately details Ohtani’s origin story and unique path to becoming one of the game’s biggest stars. Throughout the interview, Verlander, in parallel with his one-on-one discussion with Ohtani, shares his own first-hand experience from a 10-day visit to Japan where he takes in the culture and disciplined lifestyle that shaped Ohtani into the player he is today: MVP, All-Star, Silver Slugger and former Rookie of the Year.

“One thing that surprised me from my sit down with Shohei was how he actually never thought being a two-way player at the highest level was even an option,” Verlander reveals. “At 18 years old he thought he was going to be a pitcher – but then the Hokkaido Nippon-Ham Fighters came along and pitched him the idea of being a two-way player. Thus, the legend was born.”

Verlander (who’s been working with Fox since 2020 as a MLB analyst for FoxSports.com and the host of the Flippin’ Bats podcast) also spoke to USA Today’s Bob Nightengale on this. Some quotes from that:

…”People in Japan aren’t the most outspoken,” Verlander said. “They don’t speak up, don’t speak boldly, so I am their voice on the other side of the world. How can you not be affected by that?

…”From talking to Shohei, and hearing him talk about this, he’s laying the blueprint for kids, having them believe they can do it, too. I think what he’s done will change the game of baseball forever.”

Searching for Shohei: An Interview Special is directed by Bradley Jackson, who recently directed Facing Nolan. It’s executive produced by FOX Sports’ Eric Shanks, Mark Silverman, Barry Nugent, Charlie Dixon and Michael Bucklin alongside Gotham Chopra and Ameeth Sankaran from Religion of Sports and Nick Trotta from Major League Baseball. It will premiere on FS1 on Oct. 18 following MLB Postseason coverage, and will also be available across their digital platforms following that, including FoxSports.com and the Fox Sports app.