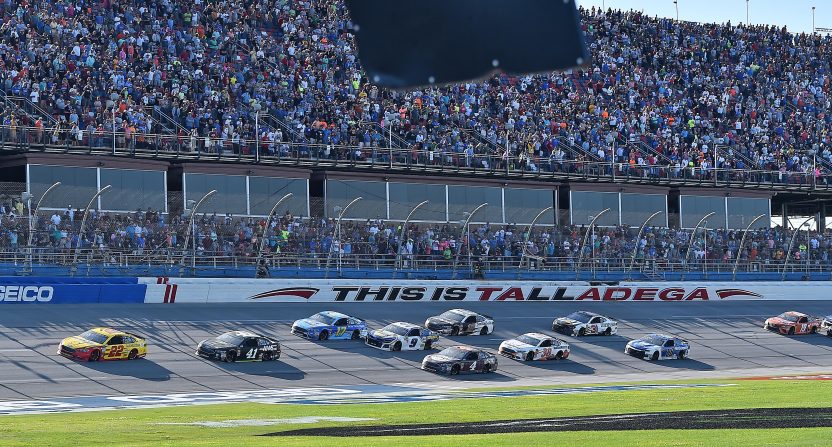 The NASCAR TV numbers continue to not be great. After a 10 percent viewership decline overall (across Fox and NBC) last year, the first half of this year’s season on Fox took a further plunge, living up to the worries many had about the sport’s declining TV popularity and the further effect Dale Earnhardt Jr.’s retirement (for a broadcasting position with NBC) might have.

As per Adam Stern of Sports Business Journal, the 14 regular races on Fox and FS1 (excluding rain-delayed races at Martinsville and Bristol) averaged 3,983,000 viewers this year, down 19 percent (and almost a million viewers) from last year’s 4,898,000 average for Fox/FS1 races and down 29 percent from the high-water mark of 5,578,000 they averaged in 2016. And while Fox execs try to say there’s a bigger picture to consider, they’re still eager to “turn the trend around”:

Fox insists that only focusing on the year-over-year comparison is not representative of the company’s big-picture view.

“NASCAR is still a powerful contributor to our overall growth … the sport remains a force in the first half of the year and is essential to our overall business,” Mike Mulvihill, Fox Sports’ executive vice president of research, league operations and strategy, wrote in an email. “(But) we have to acknowledge the reality of this year’s declines. It’s been a challenging season, and I think we and NASCAR both have to look to the future with a wide-open mind and a willingness to listen to every new idea that might help us turn the trend around.”

…Mulvihill pointed out that races on Fox’s broadcast network averaged nearly 5 million viewers, making Cup Series races the third-highest-rated show on Fox during the first and second quarter behind “911” and “Empire.” He said FS1 is up 4 percent year-over-year in ratings, setting it on track for its fifth straight year of growth, “and that would simply be impossible if we didn’t have NASCAR as a cornerstone of the channel.”

And that maybe says a lot about where NASCAR is at the moment, at least as a televised property. Yes, there was significant competition this year from events like February’s Winter Olympics (which wasn’t a factor in the other three years of races on Fox/FS1), but the ratings drop isn’t only about that. Last year’s drop was significant enough, and a further drop of this scale is certainly worrying. But even these declining ratings are good compared to a lot of non-sports TV, and there’s still a lot of appeal there for Fox, both with their sports-focused “New Fox” strategy (especially with the sale of their TV studio to Disney) on broadcast and with their push to promote FS1 on cable (where Nascar Race Hub remains one of their few consistently well-rated studio shows; it even posted viewership growth last year, in contrast to the races themselves).

Of course, the early-season races are particularly crucial for Fox, given how little other top live sports programming they often have outside the fall. Stern’s piece notes that NASCAR races were seven of the 10 most-watched events on FS1 so far this year, which sounds better before you ponder what else might be in there. There are some World Cup matches, but other than that, their sports rights to this point of the year are mostly early season baseball, some Champions League matches (which they’re losing to Turner this fall), some UFC (which they’re losing to ESPN next year), and some non-NCAA tournament college basketball. Even after these ratings declines, NASCAR’s still a good property compared to a lot of their spring/summer slate.

It should be noted that this isn’t just a Fox issue, either. As Paulsen wrote at Sports Media Watch last week, even Earnhardt’s much-anticipated broadcast debut at Chicagoland July 1 didn’t pull great ratings for NBCSN, with a year-over-year increase more about a schedule change than anything:

Kyle Busch‘s dramatic win, which peaked with 3.35 million from 5:15-5:30 PM ET, was just the second Cup Series race all season to increase. Michigan posted an increase three weeks earlier. Like Michigan, which moved up from FS1 to FOX, this week’s increase was largely due to a scheduling change.

Prior to this year, the Chicagoland race took place in September opposite the NFL. While this year’s race had tough competition of its own — the World Cup — there is simply no comparison. Last year’s competing NFL windows exceeded 25 million viewers.

…Earnhardt Jr.’s debut was not a particularly big draw even by the weak standards of this season. Of the 16 Cup Series races this year (excluding rainouts), Sunday’s race was the third-least watched behind Sonoma the previous week (2.33M) and Kansas in May (2.04M), both of which aired on FS1.  Of course it was just the second of those 16 races to face the World Cup.

So, NBC has plenty of NASCAR issues of their own, and it seems unlikely just putting Earnhardt into the broadcast booth will solve them. And it’s worth noting that the NASCAR issues go beyond just TV ratings; Stern’s piece cites an average of 18,503 people streaming races this season, which is a boost over 13,908 last year, but less than a 15th of what Fox is pulling on streaming for some weekend World Cup matches, and less than a 30th of what they pulled for a weekday match with a lower TV viewership than many of their NASCAR races.

Some of the weak streaming numbers are about these races being on weekends (so less streaming from offices), but that also seems to speak to NASCAR’s demographic issues. Streaming’s a huge part of watching sports for younger people, but NASCAR’s audience doesn’t appear to be that young these days; a 2017 SBJ piece noted that NASCAR’s average audience age on TV was 58, third-highest (behind only golf and men’s tennis), and that it saw the biggest shift since 2006 (plus nine years) of any sport studied.

And things haven’t been so great at the tracks either. As per Stern, track operator International Speedway Corp. saw a two percent attendance decline in the first quarter, but a ten percent drop in the second quarter, while rival Speedway Motorsports Inc. saw a 26 percent drop in the first quarter. That had a lot to do with rain at its events, but that’s still awfully worrying. And it speaks to the larger problems facing NASCAR. Yes, it’s still a force on the sports landscape, and still draws impressive attendance and TV ratings relative to many other properties. But most of the NASCAR trends are significantly downward, and that has many worried about where it’s going from here.