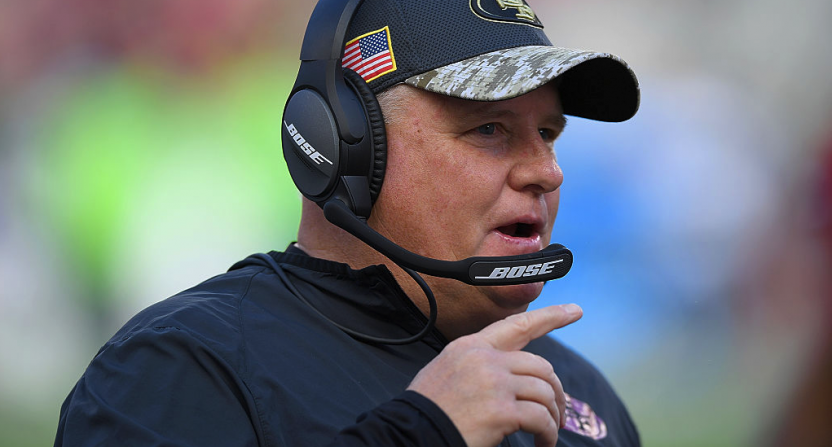 Since being fired by the San Francisco 49ers at the end of last season, Chip Kelly hasn’t been able to find another coaching gig in the NFL. As a result, he may make the jump to the broadcast booth.

After striking out with the 49ers and Philadelphia Eagles, another head-coaching position wasn’t likely to be offered to Kelly. Yet he couldn’t land an offensive coordinator job in the league either. And apparently, he had no interest in returning to college, though plenty of people speculated he could take his old job back at Oregon.

Kelly had been mentioned as a possibility for the New England Patriots if Josh McDaniels had taken one of the available head coach openings. His name had also come up for the offensive coordinator role with the Jacksonville Jaguars. Most recently, it appeared that the Atlanta Falcons might hire Kelly to run their offense, ironically taking over for the man who replaced him as 49ers head coach, Kyle Shanahan. But with the Falcons hiring Steve Sarkisian, Kelly is still a man in search of a new job.

That next job is apparently going to be in television, according to Yahoo! Sports’ Charles Robinson.

It's sounding like Chip Kelly's next #NFL stop is going to be in the media ranks. I'm told he auditioned with #FOX last week.

The key word there is probably “auditioned,” so it doesn’t necessarily mean that Kelly will transition over to an analyst role. But unless he was terrible in that audition, and there appears to be no indication of that based on what limited reporting is available, Kelly will likely provide color for Fox Sports’ NFL coverage during the upcoming season.

Another intriguing coincidence is that if Kelly is hired, he’ll fill an opening created by John Lynch leaving his Fox analyst gig to become the general manager of the 49ers. That position opened up when Kelly was fired as 49ers coach, along with GM Trent Baalke. Lynch was on Fox’s No. 2 broadcast team, but it seems reasonable to presume that Kelly won’t step into that role alongside play-by-play man Kevin Burkhardt as a novice analyst.

Several reporters who covered Kelly in San Francisco, Philadelphia and Oregon are noting the irony of him joining the media after showing little regard for the press as a coach.

During Kelly’s tenure with the Eagles, Metro Philadelphia’s Angelo Cataldi wrote this in October 2014 (hat tip to the Washington Post‘s Matt Bonesteel):

“It is no secret that Kelly had a love-hate relationship with the media during his four years as head coach in Oregon. They loved him the first year and hated him the last. Toward the end, he was combative, dismissive and accessible only when required to be. He loves coaching football a lot more than he does talking about it.”

Last October, following a 1-5 start by the 49ers, reporters asked Kelly about his job security, to which he said this (via the San Jose Mercury News‘ Jerry McDonald):

“Unless the media has an opportunity for me somewhere, I’ll always explore those opportunities,” Kelly said. “But I’m not going anywhere.”

As we know, Kelly did indeed go somewhere when the 49ers showed him out the door. Now, it appears that the media has come forward with an opportunity for him to explore.