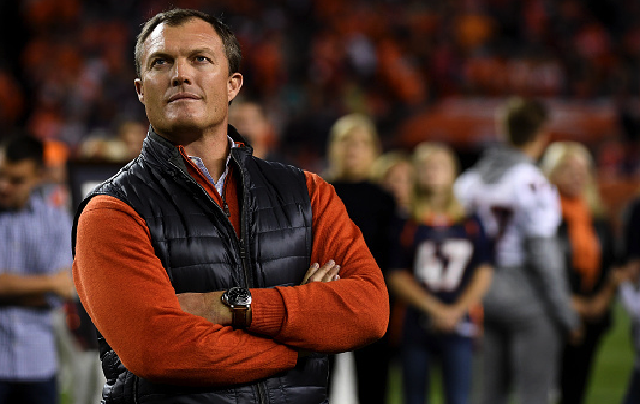 The San Francisco 49ers have hired a new general manager, bringing on a TV analyst and former NFL safety who is considered a very smart guy.

We see you stepping forward, Louis Riddick, but please step back. The 49ers announced on Sunday that John Lynch — who unlike Riddick, has no previous NFL front office experience — will be their next GM. The news was first reported by Fox’s Jay Glazer, perhaps having an inside connection to his network colleague.

ESPN’s Adam Schefter was right behind him with the news, but quickly followed up with this surprising aspect of the hire. The 49ers are signing Lynch to a six-year contract, a longer deal than most GM hires typically receive, let alone one with no experience in a NFL front office.

(The Detroit Lions inked Bob Quinn to a five-year deal a year ago, and that was considered a long commitment at the time. But Quinn did have considerable experience in the New England Patriots front office.)

49ers are giving John Lynch an almost unprecedented six-year deal to become their GM, per sources.

Lynch has been a game analyst with Fox since retiring in 2008 following a 15-year career in the NFL. He and play-by-play man Kevin Burkhardt have been the network’s No. 2 NFL announcing crew (along with reporter Pam Oliver) for the past three seasons. Who will replace Lynch in the booth has yet to be decided.

In 11 seasons with the Tampa Bay Buccaneers, he was named to two All-Pro teams and five Pro Bowls, and won a Super Bowl in 2002. Lynch also played five seasons with the Denver Broncos, earning four Pro Bowl nods. He is among the finalists for the 2017 Pro Football Hall of Fame class, which will be announced on Feb. 7. Joining the 49ers is something of a homecoming for Lynch, who played college football (and baseball) at Stanford, one of those seasons under legendary 49ers head coach Bill Walsh.

Lynch wasn’t previously mentioned among the candidates for the 49ers’ GM position. According to Schefter, he pitched himself for the job to Kyle Shanahan, the Atlanta Falcons offensive coordinator who is widely expected to be named the 49ers next head coach. (Lynch’s hire would seem to all but confirm that.)

There had been some speculation that Mike Shanahan, Kyle’s father, might be considered for the GM position in San Francisco. Lynch played all four of his seasons in Denver while Mike Shanahan was the Broncos head coach.

Lynch replaces Trent Baalke, who was fired along with head coach Chip Kelly on Dec. 31, before the final game of the regular season. According to reports, he met with team owner Jed York on Thursday and Friday and accepted the job on Sunday. With the deteriorating state of the 49ers since Baalke dismissed coach Jim Harbaugh after the 2014 season, a novice GM and first-time head coach might not inspire the most confidence among fans, critics and observers coming off a 2-14 campaign.