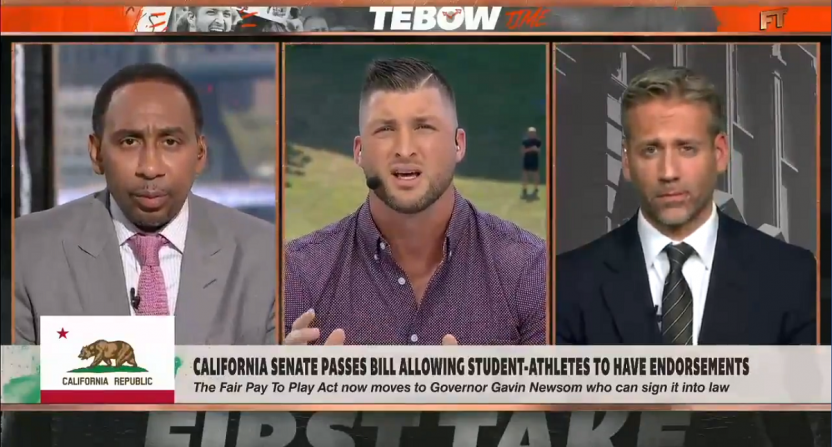 Tim Tebow is once again in the news after he delivered a defense of the NCAA’s backwards stance on amateurism today.

Tebow’s argument came during an appearance on First Take, because of course it did, and you can watch it here:

.@TimTebow passionately expresses his thoughts on the California Senate passing a bill allowing student-athletes to have endorsements. pic.twitter.com/W5uBW7ePNm

Tebow’s argument boiled down to the fact that he was okay with being exploited as a college athlete, and therefore everyone else should be exploited as well. Also, as many pointed out, this entire debate stems from the progress of California legislation that would allow athletes to profit off of their name and likeness, which means this is very clearly a political discussion. It’s almost like it’s dumb and impossible to try and separate sports from politics!

Tebow is now (sort of) a baseball player, but he also does work for the SEC Network, which means his own ESPN colleagues were quick to point out the issues with his case.

Great perspective. That Tim Tebow wishes to turn down compensation doesn’t mean all should be required to. He is free to play for free. All athletes should have the same economic rights as LITERALLY everyone else. That’s real choice. https://t.co/arHsw4YRuP

Sorry, disagree with this…. loving your college and being a team player, and making money off of your likeness, don’t have to be mutually exclusive.

I appreciate Tebow drawing on his own experience here. But he’s making an anti-individualist argument while using his own, individual story to disregard the needs of others. https://t.co/JmDoDr4hrd

Keith Olbermann also pointed out how his own privilege had shaped his career:

And everything I have in MY career started with an unpaid internship in the newsroom of a NYC TV station (which I could take while others couldn’t because I didn’t need to make money).

One of the definitions of privilege is, thinking “the system works” because it worked FOR YOU. https://t.co/jhySqtMKsV

Tebow’s argument included mentioning how he had one of the top-selling jerseys in the world, and while he didn’t profit off of that, he’s okay with it. Even if you admire his stance on that issue, and even if Tebow had come to Florida with nothing (not true, but hang with it), in the years since, he’s clearly been financially rewarded, both on the field and off. Had Tebow left school without any kind of professional future, and with his only marketable days behind him, his views might be very different now.

That’s the case for most college athletes who #goproinsomethingotherthansports: even if they end up using their degree and landing a decent job, or even building a career, they have clearly missed out on a revenue-earning window of their life they may never see again.

The plus side of Tebow’s argument: we were granted the spectacle of ESPN personalities debating each other over a political issue on an otherwise-boring Friday, which surely made management happy.