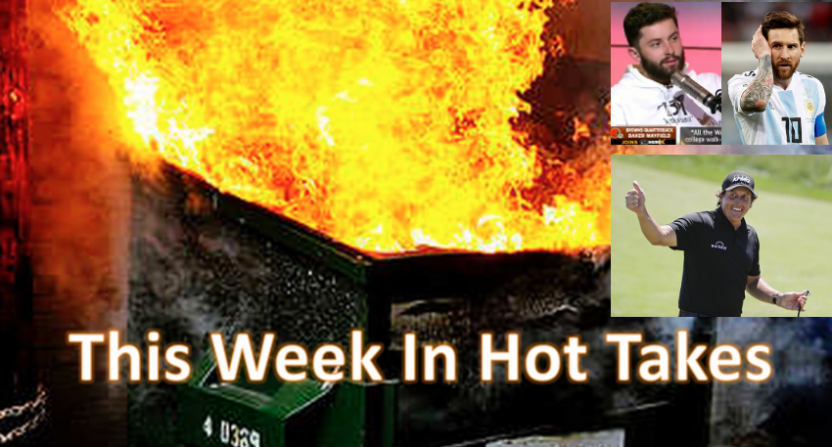 Welcome to another edition of This Week In Hot Takes. This time around, we’re looking at the hottest takes from June 15-21.

5. Cathal Kelly says most blame “will land on Lionel Messi,” “to be great, he must win”: Argentina’s World Cup struggles so far have led to a lot of discussion about star Lionel Messi, and quite a few hot takes. While it’s absolutely fair to criticize the team’s performance and Messi’s play, where it’s rising to hot take level is when people start putting most of the blame on him (he’s one of 11 players on the field, after all) and particularly where they suggest that he can’t be a great player without international trophies. Cathal Kelly of Canada’s The Globe and Mail did both Thursday in a column titled “A Messi exit looms amid locker-room argy-bargy and on-field indifference,” one which managed to criticize his “lack of sportsmanship” for bonus hot takery points:

Though there is a lot of blame and many deserve to share it, most of it will land on Lionel Messi. Once again, he made little impression on the encounter.

Near the end, you could finally see the frustration you know must be there, but is never shown publicly. After getting tangled with a defender, Messi began awkwardly wrestling the much larger man. The Croatian, Ivan Strinic, looked more surprised than offended. It is hard to recall an instance of Messi so pointlessly losing his temper during a game.

Once it ended, he shambled off the field without shaking hands – an exceedingly rare instance of poor sportsmanship.

…If they go out, it’ll be time to start prepping the obituary for Messi’s international career. It has to this point been a fairly enormous disappointment.

If a great player comes out of Hungary or Liberia, he will be afforded the benefit of the doubt if, by the end, he has not won a trophy of consequence. An Argentine doesn’t get the same pass. To be great, he must win, and Messi has never done that for his country.

It’s nice that Kelly states “An Argentine doesn’t get the same pass. To be great, he must win,” as if it’s a universal rule instead of a ridiculous comment, and how silly it is can be seen with a little thought. So a player of exactly the same talent can come from Hungary (which, you know, were twice World Cup runners-up) and Argentina and fail to win a World Cup, but they’re great in the first case and not in the second place? Yes, it would seem likely that the Argentine player would have better teammates to support him, but measuring individual titles in a team sport is problematic, and there’s a whole lot to winning the World Cup that’s beyond any one player’s control.

This isn’t a new take on Messi, of course, as he’s often been blasted for a lack of national team success. And it’s also not a new take in the sports world; we’ve seen this a lot in other sports like hockey, where star Alex Ovechkin was criticized forever for not having a Stanley Cup. Now that he’s got one, a lot of those people have become much more quiet. But in Messi’s case, it really shouldn’t matter that much if he ever wins a team trophy (and he’s got plenty of those at the club level). Criticizing his play and the team’s play is fair, but “to be great, he must win” dives further into hot takery.

4. Kelly Smith on Messi: From one Kelly to another, and one with similar criticisms of Messi at that. Fox pundit Kelly Smith has spent much of the tournament just repeatedly going in on Messi. One great part came where she bashed him for…not showing up at a Father’s Day party the team threw?

“A captain leads by example and he did not lead by example for me.”@Kelly_Smith10 sounds off on Messi’s reaction to a disappointing first match. pic.twitter.com/NSpHR8SOfk

To blasting the way he took the captain’s armband off at the end of the draw with Iceland. “This is not a captain, this is not a leader. He’s angry that they’ve obviously drawn the game, but he needs to carry his shoulders a little better.”

It was a tough day for Messi, but will he bounce back?

To in addition to bashing his play and his posture, bashing his skipping the handshakes after Argentina’s loss to Croatia:

"In the moment his team needed him the most, he was nowhere to be found."@AlexiLalas, @kelly_smith10 and @IanWright0 react to Messi's performance during #ARGCRO. pic.twitter.com/h2jF1hM9xs

3. Colin Cowherd goes after Baker Mayfield in person…for a celebration? The Cowherd-Mayfield exchange seen around the world Thursday saw Cowherd lobbing some ridiculous criticisms at Mayfield, especially when it came to Mayfield celebrating a September touchdown with the band and visiting students instead of his on-field teammates (who he celebrated the day’s other touchdowns with):

Mayfield responds “Our band is over there, our student section is over there. And then straight back to our sideline.”

…Cowherd says “I’d like you to be with your teammates.”

Mayfield says “Watch the rest of the game. I was.”

…Mayfield cuts him off and says “I feel like you’re going for the fact that I’m not a team guy. I’m selfish. Is that what you’re shooting for right here?”

Cowherd says “No, I don’t think that. I think sometimes your judgement’s just a tad off, and the NFL’s a judgement league. The game is so fast and the window gets really really tight, really really small. You’ve got to make decisions really really fast. In college, you’ve got that Orlando Brown guy (a then-Oklahoma offensive tackle, now with the Ravens), you got a little more time. I don’t love that decision, I don’t love it.”

Mayfield says “The celebration? Do you see what people do in the league now?”

Cowherd says “Hip-thrusting, not a fan. I’m not a big fan of hip-thrusting, I’m not going to lie to you, I don’t like when Antonio Brown’s doing that stuff, I’m not into it. You know what? Do you have your celebration planned?”

Mayfield cracks up laughing during the Brown comments and then says “No, I have nothing.”

Cowherd says “You’re just going to give the ball to the official?”

Mayfield says “Apparently, I need to just run away.”

Well played, Baker. As for you, Colin, that’s one of your hottest takes in a while, and over something absolutely inconsequential.

2. Everyone’s got hot takes on Phil Mickelson: The decision from not-in-contention golfer Phil Mickelson to play a moving putt before it stopped rolling at the U.S. Open Saturday and take the imposed two-stroke penalty sparked outrage heard around the world. Criticizing Mickelson’s actions here is fine, and so is criticizing the USGA if you don’t think that penalty’s significant enough, but the takes went way beyond that.

Some highlights include that Mickelson “made a mockery of his sport’s national championship” and should withdraw (Ian O’Connor, ESPN), that he should “do the right thing and disqualify himself” (Rick Reilly, The Athletic), that he”demeaned the game…acted like a spoiled child” and was “taking the middle finger off his gloved hand and raising it high”(Michael Bamberger, Golf.com), “committed a contemptuous, flagrant violation of the rules” and “should’ve been disqualified on the spot” (Phil Mushnick, The New York Post), was “manipulating the rules,” and “detracted from the larger event” (Randall Mell, Golf Channel, who also wrote that “something can be legal and still be wrong”; sure, but that kind of ethical argument is usually applied to much more important things than golf), and that this could damage Mickelson’s legacy and “he will pay in the locker room with the treatment from other players” (Bob Bubka, TalkSport).

That all seems absurd. Mickelson took the penalty prescribed by the governing body, so everyone arguing that they’re wrong wants to apply rules themselves, and arguing that Mickelson should withdraw on his own is particularly silly. And he wasn’t in contention in any case (he finished tied for 48th), so this didn’t come close to affecting anything important. But it did produce a lot of takes, all of which are five-star worthy. And we haven’t even gotten to the best one yet.

1. Andy North on Mickelson: “What he did today has to do damage to a lot of these kids that really care about him.” Yes, Helen Lovejoy is real, and she works for ESPN. Or ESPN’s Andy North was channeling her “Won’t somebody please think of the children!” line with this bizarre commentary:

Fake outrage? I think it's very real, and very warranted, my friend. pic.twitter.com/9Ur97Sb3As

“This is one of the icons in our sport. I looked up to Arnold Palmer and Jack Nicklaus. There’s millions of kids that look up to Phil Mickelson, and what he did today has got to do damage to a lot of these kids who really looked up to him. …I don’t like it at all.”

We don’t even know that there are millions of kids who look up to Mickelson, and suggesting that this move somehow has to “do damage to a lot of these kids” is just absurd. And for that, North’s take stands out even above the other Mickelson fire, and takes home our hot take of the week.