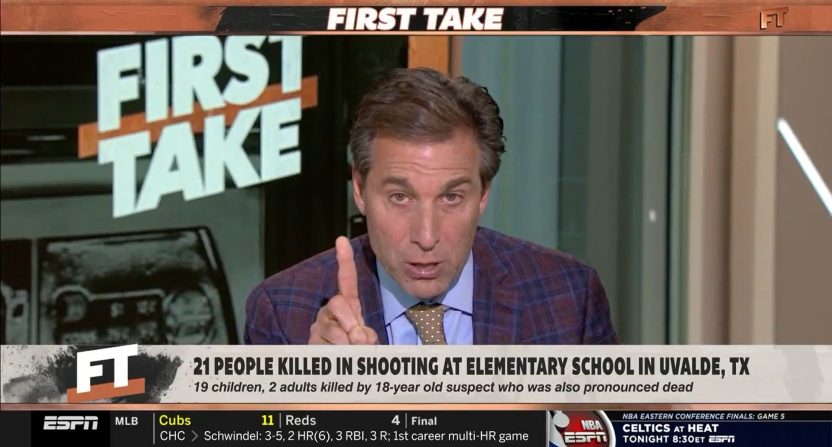 The sports world has echoed the country in grieving after a mass shooting at an elementary school in Uvalde, Texas tragically resulted in the deaths of 19 children and two adults on Tuesday.

“It’s pretty difficult to talk about sports today,” Smith said at the top of his monologue. Smith went on to praise Golden State Warriors head coach Steve Kerr for his words on the subject Tuesday evening and the First Take host proceeded to call out U.S. politicians for their failure to act on gun legislation.

ESPN's Stephen A. Smith calls out U.S. politicians for their inaction on gun legislation:

“The time has come to call out these politicians, we elected these officials to go up on Capitol Hill and get things done. They’re not getting it done,” Smith ranted. “The leaders that we rely upon to do something about this have sold us out, just so they can maintain office…Don’t name just one name, don’t name just one side. They have sold out America because they don’t get things done.”

Russo followed Smith’s monologue by aggressively calling out U.S. politicians. And while Smith is used to toeing the political line on a sports show, this is not Russo’s lane. For decades, he made his living by sticking to sports. But Russo showed another side Wednesday morning on ESPN as he offered an impassioned rant, desperately pleading to see change in America’s gun control laws.

Chris Russo is irate, emotional and fed up with politicians pic.twitter.com/ECESFgHeYb

“America, SHAPE UP, WAKE UP AND DO SOMETHING,” Russo said, demanding change. “This DOES NOT HAPPEN in Europe! Japan! China! Israel! Name the country. It happens here. The United States of America. Because of you politicians, in this case, most of them Republicans, and the President. Go out there and do something! LET’S GO! It can’t be that hard!”

Unfortunately, the line “it’s time to call out these politicians” is uttered every time a mass shooting occurs. But the news cycle moves on and these pleas get put on hold until the next tragedy. I don’t know how or what will solve the United States’ gun problem, but I know what’s not working because we see it every day.