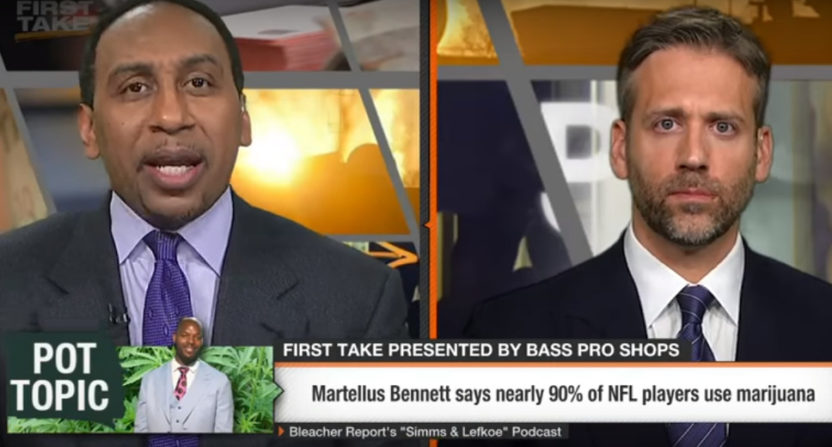 One of the most predictable hot takes in recent memory is ESPN First Take pundit Stephen A. Smith going off on marijuana for some reason, something he’s repeatedly done in hilarious fashion. Smith is at it again, delivering a rant Thursday against recently-retired NFL tight end Martellus Bennett’s comments to Bleacher Report’s Chris Simms and Adam Lefkoe that “89 percent” of NFL players use marijuana for pain relief (something gaining increased public support across the NFL and other sports). But what’s even more notable than Smith’s rant is the way Bennett responded:

Fuck you @stephenasmith all you do is hate on everybody 100% of the time.

That is not inaccurate! For context, here’s the seven-minute clip involved from Thursday’s First Take, which saw Smith ranting nonsensically about this, name-checking a bunch of former coaches, questioning Bennett’s timing in bringing this up, bringing Judaism into it, and arguing that historical racism against African-Americans makes it okay for him to criticize black players’ behavior:

“I’m not calling his comments dumb, I’m saying it was a dumb time for him to do that, it was ill-advised, this is not the time for him to be saying that with the residue of the protests and all that it caused, it involved the president last year, it affected ratings to some degree, that’s undeniable in a lot of people’s eyes, plus his brother has legal issues that are pending as we speak, so it’s just not a wise thing for him to say.”

At 1:40, Smith says African-Americans should only speak up at certain times, and that they should be respectable:

“You also gotta know when when you’re us. Because the rules are different for us. And that’s something that’s not talked about nearly enough. White folks, those who happen to be Jewish, those who happen to not be Jewish, and the like, you live in a different bubble. It’s not negative, it’s not bad, it’s not a knock, it’s not to say that nobody has suffered but the African-American community, but you come from a different place and a different world, and the kind of mistakes that you end up making don’t wind up costing you the same way that it costs us.

These are the things that African-Americans throughout this country have lamented for decades, if not centuries. It’s our reality. So when I sit up here on national television and I’m getting on somebody about pulling their pants up, or not having gold teeth in their mouth, or not having tattoos on their face and their neck and their head, and all of this other stuff, or not smoking weed or anything like that, sure, you and others can tell them, ‘Go ahead and do that, you should have the right to do that,’ and theoretically speaking, you’re right. But from a literal perspective, what kind of damage is it going to cause people?”

Some further Smith comments come around 6:10:

“Except the sacrifice wasn’t his, he put the rest of the NFL players in the eye of the storm. Because when you make the statement that 90 percent of NFL players are doing it, you didn’t make the statement for yourself, he didn’t go on national television and say ‘I use weed,’ he didn’t say that, he said 90 percent of the players are using weed. If you were talking about yourself, then your point is valid. He’s talking about the other players who may not end up getting fined, getting compromised, having their images stigmatized in a negative fashion.”

This is the world we live in, where Stephen A. and Max Kellerman are debating marijuana and its larger societal implications on national sports TV. And Smith’s comments fall into a much larger historical context of discussion about African-American activism, and brings up a lot of the Booker T. Washington philosophy of compromise and working within an unfair system, something that was heavily criticized by W.E.B. DuBois and those who have followed him.

And Smith’s adherence to those ideals of “Pull your pants up,” “Don’t have gold teeth,” “Don’t have tattoos” and “Don’t smoke weed,” is essentially saying “Be better than everyone else even if their criticisms of you are unfair.” That doesn’t necessarily look all that good in a modern climate.

It’s also interesting that Smith brought such a heavy racial component into this discussion, as Bennett didn’t; he only mentioned that many NFL players smoke marijuana, without naming names or bringing race into it. And the link to the NFL protests and to Michael Bennett’s (questionable) arrest is tenuous at best. In any case, Smith has his fans, but this sort of argument opens him up to a lot of criticism, as do his repeated “Stay off the weeeeeeed!” invectives. And it’s definitely understandable why Bennett responded the way he did.